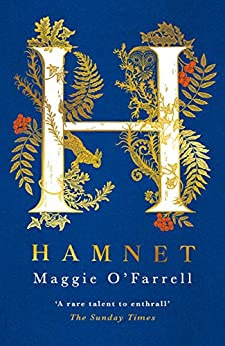 "While O’Farrell’s plot is convincing it’s the language she uses that sets her work above the ordinary."

Anne Cassidy writes crime fiction for teenagers. She has published over forty novels for young adults. She writes dark crime fiction and is best known for Looking for JJ which was shortlisted for the Carnegie medal. Moth Girls was published by Hot Key in 2016 and concerns the disappearance of two twelve year old girls. Her latest novel No Virgin  describes the aftermath of a rape.

As a reader, you wait a number of years for a great literary historical novel and then two come along at the same time. Hamnet  is the fictional story of what might have happened to Shakespeare’s son Hamnet who died in the summer of 1596. It is also the story of a young man living in a household ruled by an unpredictable and violent patriarch. This young man, the ‘Latin Tutor’, is attracted by a free-spirited older woman; someone who is more comfortable with nature than societal demands. It’s a love story of a couple who struggle to find their places in their respective families and with each other. They appear to do this through their children and this story focuses on the loss of the twin boy, Hamnet.

Little is known about Shakespeare’s life and circumstances. Maggie O’Farrell uses this dearth of information to her advantage. She breathes life into characters we’ve only ever heard of in passing. Agnes, the woman, finds love in the tutor and is able to force her family’s hand so that the marriage will happen. The tutor and Agnes live with his family and Agnes embeds herself in family life occasioning embarrassment and admiration in equal measure. Agnes is a life force and a fiercely independent character. The Tutor is a square peg in a round hole. He is oppressed by his father’s regime and expectations and we are shown the subtle ways in which he finds himself setting off for London. The couple live apart and yet find passion, togetherness and an accommodation in their separate lives until their son, Hamnet, dies from the plague.

Maggie O’Farrell weaves such a wonderful story from these scant facts that I ended up feeling that I definitely knew more about Shakespeare than I had at the beginning. I wanted his life to have been like this. But while O’Farrell’s plot is convincing it’s the language she uses that sets her work above the ordinary. Of the tutor’s lesson and his two unwilling students she says, “They look towards him, plants turning to the sun. He smiles at their soft, unformed faces, pale as unrisen dough in the light from the window.” A wonderful book which I have thought about over and over since reading it.

Hamnet is published by Tinder Press.