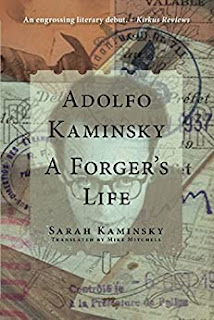 "The calculation was simple. If I slept for one single hour, thirty people would die ..."


Occupied Paris, 1942: ‘To stay awake. As long as I could. To fight against sleep. The calculation was simple. In one hour, I could produce thirty forged papers. If I slept for one single hour, thirty people would die.’

It was a race against time, against death.

The pun in French – contre la montre, contre la mort – does not translate into English, nor can I vouch for the translation of this remarkable book, but what I can vouch for is the piquancy, the grip on this reader of Kaminsky’s remarkable story as recounted by his daughter. Born in Algeria, Sarah grew up knowing nothing of her father’s past. He was a photographer. It was in the course of going through documents to establish French citizenship that she lit on the names of contacts of some standing and some throwaway reference to her father’s connection with the Secret Service during the latter part of the Second World War. Her father was a spy?

This led to a long and extended conversation between father and daughter on which the book is based. When I talked to her in Paris, Sarah told me that delving into and unravelling the facts of a life so long hidden away, overborne by memories of such dangerous times, was a delicate process. She was asking him to expose secrets which he’d kept buried for so long, out of what had been an ingrained habit of mistrust and caution. As he said, the only hope of survival had been in a deep and unremitting wariness of every action, every person. In the course of their dialogue, she inevitably found herself asking her father things which no daughter would, normally, ever broach with a parent. And, in exchange, she invited her father to pose equally intrusive questions of her.

In putting the story together, at first she could find neither balance nor appropriate tone. She therefore took on what I consider to be a very bold decision: to write it as a novel, using her father as the narrator. It could so easily have failed – been too sensational, too mawkish, too incredible, too self-serving. But it is none of those things. It is a tense narrative, written in spare language but not devoid of passion, passion which flames out, perhaps the most cogent proof that the voice speaking here is truthful and personal.

Kaminsky was fascinated by chemistry from an early age and it very soon became apparent that he had a genius for it, particularly in the composition of inks. Working in a dye factory after he left school, the boss told him they had a problem with some material that had been stained with indelible ink. Kaminsky said: ‘There is no such thing as indelible,’ and removed the stain. He was fourteen years old.

This brilliance led to work for the resistance in Paris, forging papers and ID cards, mostly to help Jewish children get away from the Gestapo and the collaborating French police.

Working from secret laboratories in the city, always in imminent danger of discovery, under an unimaginable strain of crushing toil, lack of sleep and fresh air, the prowling menace outside in the streets, his will and energy never flagged. At one point, he collapsed with fatigue. One of his assistants said: ‘Adolfo, we need a forger, not another corpse.’

His driving principle was one of outrage at the brutality of any regime which denied individuals liberty of movement, not only under the Nazis but, after the war, Jews desperate to get to Palestine, Algerian freedom fighters in refuge from the merciless French police, other rebels in Spain, South America, those avoiding the draft for the Vietnam war…He produced forged papers for victims of oppression for nearly thirty years and was never caught.

These are the bare bones of his astonishing story, no spoilers. It’s too packed with drama for spoilers to have any effect.

He’s 94, now. When I met him, in company with Sarah, we talked for a long time. In conclusion, he spoke of his marriage to her mother, an Algerian Muslim. It was, when they married, illegal for a Muslim to marry a Jew – they had to go to Switzerland and, eventually, came to France to live. That marriage, he said, was his final political act, one of defiance. Perhaps one element in his character may explain his tenacity: his humility. Added to a grace of humour and deep humanity, a lucid moral sense, it kept him, improbably, safe.