THE LIBRARIAN by Salley Vickers, reviewed by Adèle Geras 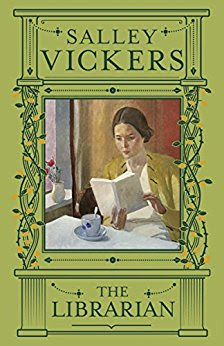 "Holding it gives real physical pleasure. Since one of the main themes of the novel is the delight that comes from stories, it’s fitting that this should be so..."

Adèle Geras lives in Cambridge and reads a lot. She’s published six novels for adults, the latest of which is Love or Nearest Offer, published in paperback by Quercus. She has also published many books for children and young adults.

Perhaps the first thing to say about this book is that Salley Vickers has been very well served by her publishers. It’s a most beautiful object: bound in eau- de-nil cloth, and with pretty, flower-strewn endpapers. Holding it gives the reader real physical pleasure. Since one of the main themes of the novel is the delight that comes from stories, it’s fitting that this should be so.

Sylvia is a young librarian who moves into a cottage in East Mole and takes up a post as Children’s Librarian. She rents a cottage from Mrs Bird, and from that moment her life is linked with that of the Bird family, and with those of her neighbours in the village. She’s involved with the children, in particular clever Sam and shy, awkward Lizzie. She meets and falls in love with the local doctor, who is married and who has a somewhat wayward daughter called Marigold.

We learn a great deal about the workings of the library, and of how Sylvia draws the local children into reading her own childhood favourites. Not everyone has enlightened ideas, however, and when a copy of Henry Miller’s Tropic of Cancer goes missing from the Restricted Access shelves, a whole series of events unfolds, at the end of which things in East Mole have changed forever.

I won’t say more about what happens, for fear of spoilers, but I would recommend this book to anyone who enjoys a tale of ordinary life, told plainly but evocatively. I’d also give it to anyone interested in children’s books, or anyone who believes that the books we read in childhood have the capacity to shape our lives forever. It’s dedicated to Jacqueline Wilson, (who’s been a very good friend of mine for something like 40 years) and Philip Pullman, whom I first met in the early 1990s, so I felt a personal pull to it even before I began reading.

The personal connections continue. One of the friends I’ve made since moving to Cambridge in 2010 is Sally Christie, who is the daughter of Philippa Pearce, who wrote Tom’s Midnight Garden. This astonishing novel, first published in 1958, figures large in The Librarian and is one of Vickers’s own favourites. I am very happy when lines of life and literature converge in this satisfying way.

The Librarian is published by Viking.