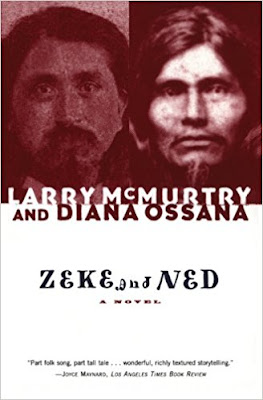 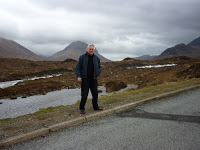 Graeme Fife has written many plays, stories, features and talks for radio, stage plays and articles for newspapers and magazines. He's the author of a string of books - children's stories, biography, works of history, four studies of the mountain ranges of southern Europe and, like many of us, waits with the patience of Job for decision on a number of manuscripts. He is now a regular contributor to BBC Radio 4's From Our Own Correspondent.


Larry McMurtry is a captivating writer, a weaver of stories out of a tradition of campfire yarn-spinning which evokes Homer’s epic poems. McMurtry’s fictional landscape is that of the borderlands and open territories of the old West, the lands overrun in the great expansion of America by the settlers which led to the eviction of the peoples who’d lived on their ancestral lands for millenia. They spoke of borrowing land, the pioneers demanded ownership.

McMurtry has collaborated with Ossana on books and screenplays – their adaptation of Brokeback Mountain won an Oscar in 2005 – and in Zeke and Ned they explore a particularly fraught passage of late nineteenth century history in the forging of the Union which resonates powerfully in what is happening to that Union today. Even as I read the novel, it occurred to me that it goes some way to illuminate why the NRA exerts such a powerful influence in American politics, not only with its strident claim to the right to bear arms apparently enshrined in the Constitution, but to the visceral desire of its vociferous members to embody the freewheeling spirit of the frontiersmen, "a manz gotta do wotta …" blah blah.

Zeke and Ned is loosely based on the life of Ned Christie, a Cherokee, who, as a child, walked what the dislocated tribes called The Trail of Tears, the long, punitive march from their homelands in the south-eastern states to lands west of the Mississippi, under the terms of the Indian Removal Act of 1830.

The novel explores the anguish and heartbreak of the clash between the displaced peoples and the relentless onslaught of ‘white law’, administered by often ill-paid and harassed judges in small town outposts and enforced in hot lead by US Marshalls, many of them post-bellum bandits, criminals, thugs and murderers, who could no more fire a pistol accurately than they could read. The terror of such application of notional justice is apparent in Ned’s summation of his plight, accused of murder, in hiding: ‘The one thing he could count on about the white law…was that sooner or later, day or night, winter or summer, they would come’.

The novel ends with chapters loosely based on the historical fact of Ned Christie’s War, when Ned fights off a succession of villainous white posses sent to root him out of the fort he’d constructed for his young wife – recently brutalised by one posse - and himself in the woods on the uplands of Shady Mountain in Oklahoma.

In these days where truth has taken on a Humpty Dumptyish aspect and facts are, it seems, manipulable, it’s interesting to ponder the matter of a novel’s truth – a resonance in our understanding of human relationships – and its bending, or ditching of facts in deference to narrative propulsion, a hallmark of McMurtry’s writing. Does that vitiate the history? I don’t believe so. As someone once remarked about the historian Tacitus: ‘He may have got his facts wrong, but he told the truth.’ For the novel admits to fiction as a means of exploring the jeopardies of the people caught up in its own construct of dramatic facts.

The imitation of serious events, the hero destroyed by excess of virtues, the explosion and, thereby, catharsis of passions, a scenario that stirs pity and fear…all make Zeke and Ned a compelling American tragedy. A similar tragedy may, surely and grimly, be seen to resurface in Sandy Hook, Stoneman Douglas…too many others.

A while ago, I noted the sign above a gun shop in north-west America: Blessed are the Piece Makers, this at a time when protesters at the closure of the pits were parading with placards declaring: God, Guns and Coal made America Great.

Hiding behind the insistence that guns are a right and hunting an integral part of American manhood, the clamour of the NRA has a rocky logic: bad man with gun is stopped by good man with gun. Really?

Zeke and Ned concludes, in poignant reminiscence of Ned’s marksmanship as a squirrel hunter: ‘…there would be the shot; bark would fly from the limb the squirrel was on; then Mr Squirrel would come sailing down. He made it seem as easy as whistling, Ned. Easy as whistling, was how Ned made it seem…’

Zeke and Ned is published by Simon and Schuster
Posted by Linda Newbery at 00:00