Guest review by Chris d'Lacey: THE QUEEN OF ALL CROWS by Rod Duncan 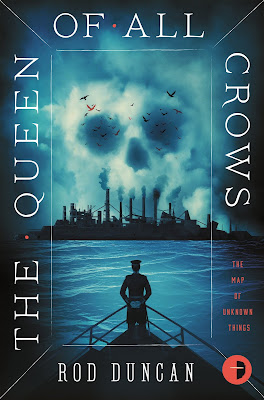 "A richly inventive novel that will make the reader think hard about gender and equality." 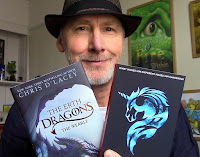 Chris d’Lacey writes books for children of all ages, but is best known for his series The Last Dragon Chronicles which have sold over four million copies worldwide. The final book in his latest dragon series, Erth Dragons #3 The New Age comes out in April 2018. He is a regular speaker at schools, libraries and book festivals. Way back in 1998 he nearly won the Carnegie Medal. In July 2002, he was awarded an honorary doctorate by the University of Leicester for his services to children’s fiction. A long time ago, Linda Newbery persuaded him to write as a 14 year old female called Annabelle, a character he is still proud of to this day…


One of the most entertaining books I had the pleasure to read in the last few years was The Bullet-Catcher’s Daughter, the first in Rod Duncan’s innovative trilogy about the Gas-Lit Empire, a ‘modern day’ world manacled by the International Patent Office, an organisation who have stalled the progress of technology and in so doing brought about a Peace Accord between most of the nations around the globe. In this, the first book of a second trilogy, the story develops beyond the boundaries of the Empire, where the Patent Office have no jurisdiction. But when an airship bound for America is brought down over the Sargasso Sea and a whaling vessel is also attacked, the Patent Office is forced to respond.

Enter Elizabeth Barnabus, the principal character from the first three books, who is dispatched, at her own request, to investigate. So begins a perilous journey that leads to a clash with a bunch of female pirates, who take Elizabeth to their home world, Freedom Island, where the main hub of the story unravels.

Freedom Island is unlike anything Elizabeth – or indeed this reader – has ever encountered before. At first it seems a highly-improbable habitat. But part of the appeal of Duncan’s writing is his gift of building a fictional world so utterly believable. Indeed, his flawless ability to draw the reader into a fantasy environment with precise and often quite breathtaking prose is arguably his greatest strength. It is the lushness of the writing and the stream of clever ideas, rather than the subtleties of the plot, that make this such an inspiring novel. The descriptions of boats, their machinery, and the battles which come to take place on them are exceptional. A huge testament to the author’s talent is his ability to suspend what one would normally take for granted about ‘modern’ warfare and pitch the reader into an alternative twenty-first century ruckus where pistol shots dent iron chimneys and glinting sabres swing off a sash belt.

Yet, for all its swash and buckle, The Queen of All Crows is much more than a standard pirate romp. The book’s title refers to the canny matriarch who rules Freedom Island – though only women are allowed to live freely there. Little surprise that Elizabeth’s alliances are soon deeply divided. For while she is appalled by the fate of male captives and yearns for the lover she has forsaken for this mission, she is also stirred by the female unity she sees all around her. The question is, can she strike a balance between her conflict of loyalties and find a resolution before war ensues between the Sargassan Nation and the Gas-Lit Empire…? A richly inventive novel that will make the reader think hard about gender and equality.

The Queen of All Crows is published by Angry Robot.
Posted by Linda Newbery at 00:00