Guest review by Keren David: FAMILY SECRETS: LIVING WITH SHAME FROM THE VICTORIANS TO THE PRESENT DAY 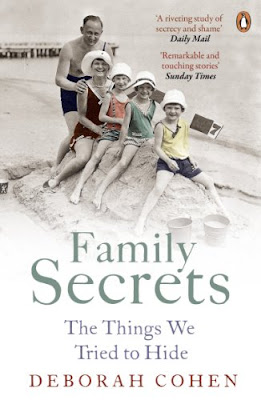 "If you love watching Long Lost Family or Who Do You Think You Are? then this book is for you."

Keren David is the author of eight novels for Young Adults; she is also Features Editor for the Jewish Chronicle. Her latest book is The Liar's Handbook (Barrington Stoke)


There are some works of non-fiction that help and inspire me when I’m writing one book in particular. For my latest I've been reading books about Canadian life in the 1900s, and very interesting they have proved.

But there are other books which provide enlightenment and underpinning for almost everything I write. Deborah Cohen’s marvellous Family Secrets: Living with Shame from the Victorians to the Present Day is most definitely in the latter category and I commend it to any writer whose subject matter involves families, secrets, lies, shame or privacy; that is, very many of us.

Cohen examines areas of family life which have involved secrecy and shame, particularly in the twentieth century and examines social attitudes towards them. Adoption, homosexuality, learning and physical disabilities, race, domestic violence, incest and illegitimacy are all covered, as well as the prevailing attitudes towards secrecy itself, as society moved towards today’s confessional culture. Cohen tells the story of what happens within the family, a change from the usual accounts of social change which focus on protest movements and changes in the law.

To tell those stories she has looked at family letters and diaries, the files of adoption agencies and institutions for the mentally handicapped, the records of marriage counsellors and the divorce court. Just reading about her research (“In Edinburgh, staff had to cut the plastic bands strapped tightly around marriage-counselling files from the 1940s and 1950s before I could begin my research”) gives me a frisson of excitement. The curiosity, that need to know more and understand people better which fuels many a journalist or novelist (I am both), is very well satisfied in this book. It also helps place the current fascination for revealing more and more Love Island-style in a narrative starting in the teeming Victorian tenements where privacy was a luxury that the poor could not afford.

The book starts with a sentence that could come from a novel: “Celia Ward was resourceful and she was desperate.” Celia and her husband wanted to adopt a baby, and in 1920 she felt it had to be as secret as possible. She stayed in a nursing home for a month, pretending to have given birth, and told everyone that the child was her own. If you love watching Long Lost Family, or Who Do You Think You Are? then this book is for you, it puts many such stories in context, leaving enough to the imagination that to read just one chapter provides a writer with a fertile river of ideas to develop.

“There are an infinite number of stories to tell about families, for they are all famously unhappy (and perhaps also happy) in their own ways…” says Cohen, “Writing about the families of the past is an enterprise that necessarily balances the universal and the particular, for the emotions that families call forth (love as well as hate, the warmth of protection and the struggle against dependence) are uncannily familiar - whether considered from the standpoint of legal frameworks, social structures or the brute facts of demography - has often changed utterly.”

Her book made me reflect on my own family’s twentieth century secrets ; the ones I know about anyway, which include one great uncle in a mental asylum, another who was homosexual, and another uncle who disappeared from our lives when I was six, and then reappeared again when I was 14. My husband’s genealogical researches likewise turned up lies about a marriage and a great-aunt who died in a poorhouse. And when I wrote books about adoption and bisexuality, Cohen’s research and insights were invaluable; I can’t recommend it highly enough. And I will be reading it yet again this summer.

Family Secrets: Living with Shame from the Victorians to the Present Day is published in hardback by Viking, and in paperback by Penguin with the title Family Secrets: The Things we Tried to Hide
Posted by Linda Newbery at 00:00