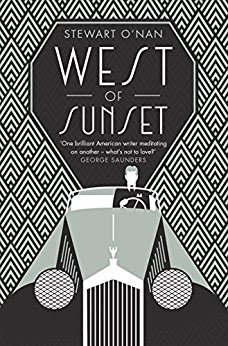 Stewart O’Nan’s multi-layered novel, West of Sunset, weaves a compelling story of many strands. Set in the Hollywood of the late 1930s its cast list features gilded names from the Golden Age of movies – the stars, Bogart, Joan Crawford, Garbo, the studios who made them stars, MGM, Metro, and the writers who wrote the scripts, among them Scott Fitzgerald, in the dying years of his life, contending, through an alcoholic haze, with the cruelties of the movie industry and his wife, Zelda’s, mental illness. She committed to a clinic/asylum, he ricocheting from one ungrateful writing job to the next, ‘as adaptable as a hermit crab’, their hapless daughter, Scottie, without any permanent or secure base – boarding school, her grandmother’s, visits to the clinic, hotel rooms in Hollywood.
It’s a nightmareish world, an existence which parallels the fake dreamscapes of the movies themselves. And west of sunset might be that murky penumbra left when the light fades from the screen and the never-never land of make-believe hits the hard rails of the reality: writers discarded mid-script with neither reason nor apology, the unforgiving demands of the writers’ building - the Iron Lung - the seedy apartment where Fitzgerald works, his neighbours ‘starlets and grips hoping to do better [and] an obese woman who sold her screams to the movies and treated them to free samples, rehearsing at all hours’.
The pressure to deliver is unrelenting – deadlines, endless pots of coffee, working into the small hours, ‘restaging the French revolution as a tragic love story for Garbo’, accommodating the imperious warning of the fading star in need of a hit after a flop: ‘I never die, I never ever lose my man’. This is Crawford, and O’Nan observes that as a star got older, the range of parts got narrower, and so the forlorn urgency to reclaim the glittering heights grew ever more insistent. But, when pretence rules, what certainty is there, can there be? Of his own tortured feelings about Zelda, the beautiful, funny, dazzling creature he married and still cherishes, declined into a woman oscillating between unpredictable states of tenuous reason and incomprehension, her body either haggard or bloated, yet still capable intermittently of thrashing him on the tennis court and swimming like the lithe nymph she’d once been, he reflects: ‘they’d been so miserable together that he’d never invented a happy ending for them’. Is this Fitzgerald or O’Nan? It doesn’t matter. So fully does O’Nan explore the spectral vision of pretence – that’s what they were all engaged in, after all, pretending – that the resonances are painful and telling. It was an environment of bad faith and worse taste. The author, praised lavishly by the producer, goes to the movie screening and sees what he wrote mangled, changed, lost, trashed.
Through all this, Fitzgerald still tries to answer the drive to write another novel, to do once more what he’d done best. And so, the feverish clutching at time, the chasing of scraps of money to keep going, despite promises and offers broken and reneged on, the constant battle with Goldwyn and Mayer ‘and whatever third head of Cerberus guards the gate’. But there is an unlikely redemption.
In Hollywood, Fitzgerald meets and falls in love with the English journalist Sheila Graham - inscrutable, self-possessed, sane, who, in looks, ‘might have been Zelda’s twin’. Their ardent relationship runs like a parallel life, a kind of stability to offset the chaos of his tormented marriage. Graham rebukes his drinking, he reforms, and, in a poignant conclusion to one chapter: ‘Whoever she was, he wanted her, as he wanted these peaceful days to last, and this new life, impossibly, to be his’. Oh, the latent force in that ‘impossibly’.
O’Nan is a writer of quite extraordinary range, author of a corpus of novels which embrace widely diverse styles, scenarios, bases of character and story. His work is infallibly wise, compassionate, fearless in its description of the darker margins of human existence, enthralling, always. West of Sunset is, in my view, one of his finest achievements – and I’ve read all his work – beautifully shaped writing, an unerring pulse of drama, a captivating story, full of pathos, wicked humour and indelible portraits drawn, as it were, from vibrant life. Here’s poor Zelda, in her delirium: ‘Maybe I was never meant to be a salamander, just this poor thing they wrap in sheets and feed when the bell rings. I’m sorry I cost you all those cities all those perfect boulevards with their lights burning down around us in the night.’

Graeme Fife
West of Sunset is published by Allen and Unwin, 2015.