Guest review by Miriam Moss: GRIEF IS THE THING WITH FEATHERS by Max Porter 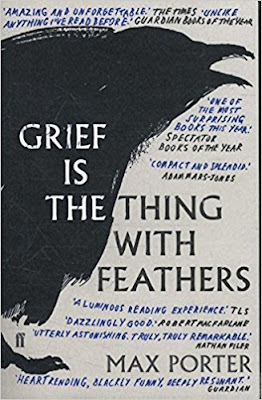 Miriam is an award-winning writer of fiction - short stories, novels and picture books. She grew up in Africa, China and the Middle East before living in England. After graduating, she taught English until the arrival of her first child, when she began writing.

Her latest short story, Salvage, is published in the Fish Anthology 2017, and her novel, Girl on a Plane, a fictionalised account of a real life hijacking experienced while travelling alone in the Middle East aged 15, is published by Andersen/ Penguin Random House. Her next novel is set in Africa.

She has published many picture books, including Matty takes Off (Andersen), Bare Bear (Hodder), Wibble Wobble (Orchard), I Forgot to Say I Love You! (Macmillan) and Bad Hare Day (Bloomsbury). Her latest is Dr Molly’s Medicine Chest (Walker).

Miriam lives in Lewes, Sussex, has three grown up children and works in a converted triangular potting shed in the garden. See more on her website.

Behind the Emily Dickinson–derived title – her poem is called Hope is the Thing with Feathers - is a short, finely crafted prose poem. The wonderfully compact, moving narrative is a meditation on grief, but it’s also a surprisingly funny book, as well as a clever and highly original read.

A mother has died suddenly, leaving a grieving writer. the father of two young sons, bereft and in disarray. The father, who attempts to come to terms with his wife’s death, is writing a book about Ted Hughes (called Ted Hughes’ Crow on the Couch: A Wild Analysis) when, one night, a huge crow bursts through the door of their London flat.

Crow, the mythic creature from Ted Hughes’ poetry, is a trickster, a philosopher of death and rebirth, who intends to stay, and he joins Dad and Boys in a trio of alternating voices, full of energy and unpredictability.

Crow, who has elements of the shaman, describes himself as ‘ … friend, excuse, deus ex machina, joke, symptom, figment, spectre, crutch, toy, phantom, gag, analyst and babysitter.’ His relationship to the father is as chaotic and unpredictable as grief itself. He’s protective, predatory - and then suddenly sensuous: ‘I prised open his mouth and counted bones, snacked a little on his unbrushed teeth, flossed him, crowly tossed his tongue hither, thither, I lifted the duvet. I Eskimo kissed him. I butterfly kissed him.’

Though the book’s emotional landscape is desolate, there’s plenty of black humour that playfully derails the reader’s expectations. The writing shifts from tragic to uplifting, from Crow’s mocking hilarity to the awful sorrow of the father and the heart-wrenching sadness of the two boys.

The domestic landscape is never far off. Grief, we are told, needs time to heal, but from the father the boys have other more ordinary needs: ‘washing powder, nit shampoo, football stickers, batteries, bows, arrows, bows, arrows’.

The mother, whose life has been cut cruelly short, is evoked by the details of how she lived: ‘She won’t ever use (make-up, turmeric, hairbrush, thesaurus)./She will never finish (Patricia Highsmith novel, peanut butter, lip balm)./And I will never shop for green Virago Classics for her birthday.’ And it is only at Crow’s leave-taking that we hear how she died. ‘Accident in the home./She banged her head, dreamed a bit, was sick, slept, got up and fell,/Lay down and died. A trickle of blood from an ear.’

Together, Crow and Dad work through his grief, and, during the final session, they look back: ‘You’ll remember with some of my early work with you,’ Crow says, ‘that what appeared to be primal corvid vulgarity was in fact a highly articulated care programme, designed to respond to the nuances of your recovery.’

I particularly enjoyed the fact that the story also becomes a meditation on the difficulty of writing. Porter, at one point, advises that the only way to write, in this case about love and loss, is ... to begin.

Summary: Grief is as unique as you are.

Grief Is the Thing with Feathers is published by Faber.
Posted by Linda Newbery at 00:00