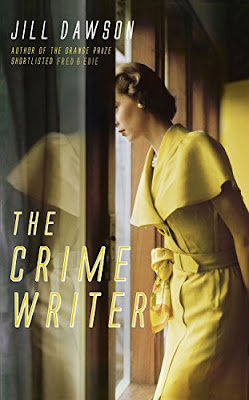 "Dawson's style is lyrical, particularly in her description, and immensely sympathetic to her complex, obsessive protagonist."

Patricia Elliott is the author of nine novels for children and young adults. She was lucky enough to win the Fidler Award for her first, The Ice Boy, and since then has been short-listed for many other awards (however, to date, never again winning first prize!) She has written in most genres – fantasy, historical, mystery -  but settings are particularly important to her and Suffolk, where she lives, has featured in several of her novels, including her Victorian Gothic YA, The Devil in the Corner. Her last two novels were Middle Grade mysteries set in the Edwardian period and featuring twelve-year old would-be anthropologist, Connie Carew: The House of Eyes and The Ship of Spectres. She is currently writing a fantasy set on the Suffolk coast.

Patricia Highsmith, whom Graham Greene called 'the poet of apprehension', is the protagonist of this clever, beautifully written novel, a successful combination of fact and fiction that is sometimes blackly comic yet always gripping. Jill Dawson has imagined Highsmith as the protagonist in her own murder story, and, like the characters in her novels, suffering the same feelings of guilt and terror after the act.

I chose this novel to review because as a young teenager I was mesmerised by Patricia Highsmith's novels. Gloriously dark and menacing, with protagonists that seemed trapped in tragedies that had befallen them through one bad move that then led on, inexorably, to a chain of events they were almost helpless to avoid and yet, in a strange, inexplicable way, encouraged, as if they were playing a mad game, struck a resonance with me. At that age I had decided you could not escape Fate. It lay in wait for you and probably not in a good way, but it was fun to tempt it and see what happened.

The Crime Writer is set in Suffolk, where I live now, not far from the village of Earl Soham where Patricia Highsmith, then in her early forties, came for a period in 1964. She also walked the streets of Aldeburgh, which I know well, with her close friend Ronald Blythe (author of the acclaimed Akenfield), and her irritable ghost roams still, I sense, brushing past the holiday crowds and up to the lonely, squat presence of the Martello tower brooding over the cold North Sea, where this novel ends.

But back to the beginning.

Patricia Highsmith chose the village of Earl Soham, a 'dull, pleasant place' in the middle of nowhere, precisely for its 'anonymity'. She hoped to escape the trying newspaper reporters who wanted to write about her as an award-winning American crime writer, a label Pat (as she was known) despised. As she would patiently explain, there was little detection or description of police procedure in her books. She preferred them to be seen as suspense novels. It is true that the murders in her novels are less significant than the pursuit afterwards and the guilt suffered by the murderer: the chase and punishment rather than the crime itself. Her sympathy – and thus the reader's – is for the murderer rather than the victim. The murders are often committed with little thought, as if the actual motive comes after the deed is done. 'What interests me most is what goes on in the mind of someone who has killed somebody,' she said. 'Perversion is... my guiding darkness.'

In Earl Soham Pat believed she would find the peace to work on both her new novel and a commissioned non-fiction book on suspense writing. The village was also within relatively easy reach of London and her lover, Sam, the unhappily married wife of the repulsive (to Pat) Gerald. Beautiful Sam, tall, poised, elegant, would visit her for romantic weekends when they would celebrate their secret love in complete privacy.

But in The Crime Writer things do not go as Pat hopes. Hurried calls in the chilly phone box opposite her dank little cottage do not bring Sam as often as Pat desires. Always paranoid about being stalked she becomes convinced someone is following her, perhaps the same person who sends her letters that she leaves unopened. Hallucinations of a grotesque little man and the darting shadow of a mouse haunt her, as well as memories of her troubled, sometimes abusive, childhood. A heavy drinker and smoker, socially awkward, spiky, Pat is a passionate collector of snails, who likes to observe them mating on her window sill (and, indeed, shares some of the creatures' characteristics). Alone, she luxuriates in dark imaginings of committing murder. Those she knows - unloved, even loved - are the victims in her fantasies. Only her dear friend Ronnie (Blythe), always equable and kind, who does not judge her, can lift Pat's moods, though his 'sense of glowing health and cheer' can be exasperating.

Meanwhile, there is the boisterous, puppyish Ginny Smythson-Balby, with her bosoms like 'two juggernauts', seemingly yet another journalist but whose extravagant charms are impossible to resist...

Jill Dawson writes from Pat's point of view, whether in the third person or the first, and which she chooses to use when significant. She completely convinces us that it is Pat's thoughts to which we are privy, though in the first person sections she makes no attempt to pastiche Highsmith's style. Highsmith's was spare, cool, relentless, with an overriding sense of dread; she spent little time on setting. Dawson's style is lyrical, particularly in her description, and immensely sympathetic to her complex, obsessive protagonist, as Pat becomes more and more unable to distinguish between what is real and what is in her head. As in Highsmith's novels, the 'murder' happens early in The Crime Writer; followed by reflection, guilt and the ghastly chain of repercussions, which culminate in another 'murder'. Some of this reflects the plot of A Suspension of Mercy, the novel Pat was writing at the time, set in Suffolk, about a man who fantasises about killing his wife, but Dawson has also used details from other Highsmith novels, in particular Strangers on a Train and Deep Water. Sam herself is modelled on the beautiful, sophisticated lover in The Price of Salt (filmed recently as Carol).

The period detail is excellent: clothes, perfume, the items sold in the village store, the smell inside the phone box, the toiletries in Sam's bathroom, sixties' pubs. And of course the novel is about a writer and includes many insights into what goes on in a writer's mind. As Pat remarks to Ronnie, 'Who isn't to say that the life of the imagination isn't the most valid, the most real...' Something perhaps all writers have felt at times.

The Crime Writer is published by Sceptre.