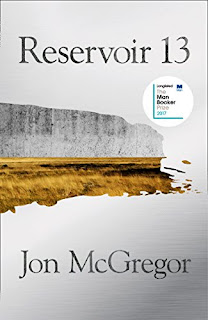 A girl is missing. This trope has become altogether too familiar in recent years (and yes, I’ve used it myself, in Quarter Past Two on a Wednesday Afternoon* - I’ll excuse myself by pointing out that I began it in 1997, rather than jumping on an already overloaded bandwagon). Jon McGregor’s novel begins with the disappearance of a thirteen-year-old girl from a Peak District village on a winter’s afternoon, but it’s not the crime novel you might expect from this opening and especially not one of those whose plot hangs on a startling twist.

The girl’s name was Rebecca, or Becky, or Bex. She was looked for, everywhere. She was staying with her family in a village holiday let, and after her disappearance the parents return, intermittently and separately, the father sometimes behaving oddly enough to be treated as a suspect. Reservoir 13 is unusual in structure and style, spanning thirteen years, a chapter for each. We follow the lives of residents of this small village, location unspecified though with enough references to the Kinder Scout trespass, the well-dressing tradition, villages drowned beneath reservoirs and a crashed Lancaster bomber for us to place it in Derbyshire near the start of the Pennine Way. It’s unsettling at first that the viewpoint never settles on one or more main characters but circles around a great many, the focus often shifting within a paragraph from one character or group to another; but you get used to this, along with the brisk progression through the years. The omniscient narrative concerns itself almost as much with the yearly cycles of badgers, foxes, buzzards and goldcrests as with the human residents: In the beech wood the foxes gave birth, earthed down in the dark and wet with pain, the blind cubs pressing against their mother for warmth. I like to think that I’m fairly knowledgeable about wildlife, but had to look up “springtails”, which make frequent appearances.

McGregor uses short, often simple sentences, and dialogue is rendered without speech marks. To give the flavour of this: Inlets are probably clogged again, he said. Everything else all right? Yes, yes. Fine. He took out a pouch of tobacco and rolled a cigarette. She looked as though she had more to say. He nodded up at a bank of clouds over the moor, thickening. Weather, he said, and walked on. Mr Jones, she called after him. Will you let me get someone in? He stopped. It’s a decent boiler, he said. I’ll sort it. A goldcrest moved through the tall firs at the far end of the playground, picking quickly at the insects feeding between the needles. From the hills behind the allotments a thick band of rain was moving in.

McGregor plays with the reader’s expectations of what's happened to the missing teenager.Various possibilities are aired by the locals: there are old mine-shafts, locked-up cottages, a closely guarded boiler-house, and of course the several reservoirs, where the title and the number 13, which corresponds to the number of chapters, seem to be leading us. When walkers stray from the paths, children explore mine tunnels and the water-levels in the reservoirs sink to drought level, we anticipate a discovery; and James Broad, one of the group of teenagers who hung around with Rebecca, knows more than he’s told the police. In another novel these would be either clues or red herrings. But in many such novels the denouement, however carefully the ground is prepared, proves disappointing – the rug-snatching moment not enough for the reader to suspend disbelief. You won’t find that here, with the focus on the ordinary lives of the villagers and the rhythms of the seasons and of community life. Though still remembered, the mystery is in the background.

A woman moves to the village to escape from her violent husband. Teenagers grow up, go to university, return. Allotment crops thrive or fail. Relationships end, new ones develop. Pantomimes are staged each winter (yes, in some ways it’s like Ambridge); the parish council meets; words were had when someone offends. Social media arrives; contacts are made on Facebook; lambs are born, ewes lost in snowdrifts; there’s minor and more serious crime; a dairy farmer is forced by supermarket milk prices to the point of giving up. Many or even most of the characters' stories are characterised by disappointment and loneliness, adaptations and compromises. As the years pass and the missing girl fades into legend, we're reminded how old she would be now and how she might look.

A Guardian feature earlier this year explains that McGregor ‘wrote the book out of sequence, getting down all the scenes about individual families, and then all the lines about blackbirds, foxes, reservoirs and so on, storing the sections in a ring binder. “Then I went back and cut it all up and rearranged it. There was a point when it was purely collage.”’ At any point, he says, he was concerned with just one line. Perhaps that explains the sense of freshness and immediacy that gives this book its distinctive quality. There's something quite mesmerising in the telling; something seductive in the rhythms that reminds me of Cormac McCarthy.

Reservoir 13 is published by 4th Estate.

*published in paperback as Missing Rose, 2016
Posted by Linda Newbery at 00:00