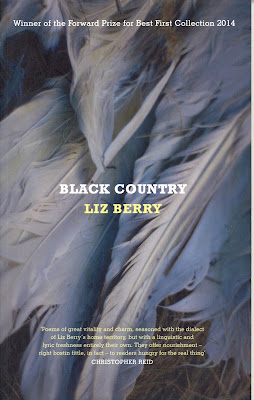 Ann Turnbull writes stories for young people of all ages. Her young adult novel No Shame, No Fear was shortlisted for both the Guardian and Whitbread awards. Since the 1970s Ann has lived a mere twenty miles or so north-west of the Black Country, so its accent is familiar – but her own accent remains stubbornly south-east London.

I came upon Liz Berry’s work by chance while writing a historical novel set in the Black Country. I was searching online for a book about the local dialect, and among the phrase books was Liz Berry’s book of poems. Poetry sounded like a more enjoyable way of getting the feel of the dialect so, by a happy chance, I bought that instead.

In the end, hardly any dialect found its way into my novel, but this book awakened in me a renewed interest and enthusiasm for poetry. I became immersed in these poems, loved them, and read them over and over again.

Black Country is a celebration of the region – its people, their work, their landscape and history. Like Liz Berry, I believe that the voices of ordinary people – those strong, resonant voices – should be celebrated. They carry, as folk songs do, the stories of working people’s lives and history. So here are the canals (‘cuts’), nail-making and chain-making industries, pits, pubs, food – and here is the authentic voice of the people:

“bibble, fittle, tay, wum,
vowels ferrous as nails, consonants
you could lick the coal from.”

There’s the world of work:

“Nailing was wenches’ werk.
Give a girl of eight an anvil and a little ommer
and by God er’d swing it,
batter the glowing iron into tidy spikes…”

And, when work was done, there were the pigeons beloved of colliers

“whose onds grew soft as feathers
just to touch you, cradle you from egg
through each jeth-defying tumble.”

There are sensual, lyrical poems about love and sex, funny poems, dark ghostly tales, poems based on family letters and stories. This is a collection of great variety – of ideas, and of styles and rhythms, with depths and subtleties that become apparent on re-reading. There is a beautiful precision in the use of language. On Christmas Eve the Black Country is ‘tinselled by sleet’ which ‘fattens and softens to snow’; a teacher ‘unhooked a high window on a stuffy day/and heard the room’s breath’; pigeons fly ‘jimmucking the breeze’.

The collection carries throughout the theme of a girl growing up and leaving home, and the imagery of birds is used to describe her awakening to adult life, love, sensuality and eventual flight:

“then an exultation of larks filled the clouds
and, in my mother’s voice, chorused:
Tek flight, chick, goo far fer the winter.”

What I love most about this collection is the warmth and tenderness that lies at the heart of all its variety. My own favourite section is the last, in which the poet returns to her childhood – in particular to her father who, the summer before she started school,

“…made me a boat of words
and pushed us off from the jetty into the Sea of Talk.”

“Bab, little wench, dow forget this place,
its babble never caught by ink or book,
fer on land, school is singin’ its siren song
and oysters clem their lips upon pearls in the muck…”

Liz Berry was born in the Black Country and now lives in Birmingham. Black Country, her debut collection, was published by Chatto & Windus in 2014, and has received many awards, including the Somerset Maugham Award, the Geoffrey Faber Memorial Award, and the Forward Prize for Best First Collection 2014.
Posted by Linda Newbery at 00:00