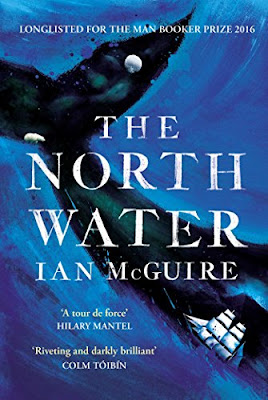 "Sometimes I had to snap the book shut to keep Drax and the savagery inside, but not for long. The suspense was too much to bear."

Her books include The Winter Dragon, Lord of the Forest, The Littlest Owl, Please Don’t eat my Sister, Diamond (Kathleen Fidler Award), Kevin the Blue (Independent Story of the Year),The Shaman Boy (East Midlands Arts Award for Cloud Cat),The Gods are Watching, Eleven o’clock Chocolate Cake, Mine, Silkscreen (Arts Council Award), and short stories such as Tam the Eldest, The Dolphin Bracelet and Our Lady of the Iguanas.


Caroline has just ordered expensive new glasses ready to begin that novel that’s been in her mind all summer. See also her website.

Behold the man. Henry Drax, harpooner, smelling and sucking his fingers after readjusting his crotch, murdering a stranger and raping a boy in the very first chapter. You have been warned.

Drax is the wild, unholy engineer of vile magic, of blood-soaked transmutations. Even when he disappears into the vast indifference of the Arctic Circle, you’ll sense him out there, waiting. He’ll burst back into the story like an acid attack. No unhappy childhood or abuse excuse for Henry Drax. He is beyond reason, a morally null thing.

In the port of Hull in the eighteen fifties, Drax joins the crew of the Volunteer, a whaling ship owned by the rich and ruthless Baxter, who now has other plans for it. Baxter has hired Brownlee as captain, an odd appointment seeing as Brownlee’s last vessel was crushed to matchwood by a berg. Brownlee must appoint a ship’s doctor, and he thinks that Patrick Sumner, a shortarse hopalong, will do, because he is cheap and seems easy-going. Unlikely as it may seem, it is the Homer-reading Sumner who will stand up to Henry Drax. When first they meet, Drax stares at him for a moment as if deciding who he is and what he might be good for.

Sumner boards the claustrophobic, faintly faecal-smelling Volunteer. He is a disgraced army surgeon with a reputation in tatters, no explanation given yet. Every evening he takes twenty-one grains of opium to blur his past and after a concoction mixed with rum he dreams of wandering over the ice fields, seeing unicorn, sea-leopards, walrus, storm petrels, albatross - and polar bears.

Sumner is isolated from the crew as the ship slumps and pitches amid the seething hillocks of an adamantine sea. This is a world of harsh beauty and horror. Think mythic Melville, but also Lord of the Flies, Heart of Darkness, and the Old Testament fierceness of Cormac McCarthy. Any women writers here?

Sometimes I had to snap the book shut to keep Drax and the savagery inside, but not for long. The suspense was too much to bear. The story gripped me. It was a while before I noticed it’s told in the present tense, which can irritate. Not here.

The scenes of seal-killing and whale-hunting are inevitably violent, almost too much for a veggie Greenpeace reader. I wonder if there’ll be co-editions in Japan, Norway and Iceland... There’s shock after cruel shock, blood, pus, shit, rape, murder, odd sex and non-stop swearing, but there are rare rays of beauty to light the desolation; the sky is dense with stars and upon its speckled blank, the borealis unfurls, bends back, reopens again like a vast and multi-coloured murmuration. There’s also sly humour. When a priest woos the Esquimaux with crucifix, candles and Jesus, they find it secretly amusing, a form of exotic entertainment in the otherwise dull expanses of winter.

This is McGuire’s second novel and it won the RSL Encore award. He has recreated a lost world. He grew up near Hull, my distant hometown. My father worked in High Street, a few doors up from William Wilberforce House, so I loved the Hull setting with the cobblestones, Queen’s Dock, Bowlalley Lane, the Turkish Baths, the De La Pole Tavern and the Tabernacle, Charterhouse Lane, and yes! Caroline Street, but my favourite street, the Land of Green Ginger, is much too magical to feature here.

The narrative plunges like a roller-coaster built on ice. Sumner the surgeon sinks lower, even lower than you could imagine. There is some kind of redemption, and the ending has a scene of profound loneliness which has haunted me since I first read The North Water last year.
Posted by Linda Newbery at 00:00