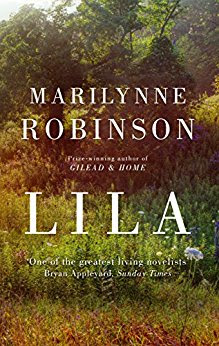 Joanna Rossiter grew up in Dorset and studied English at Cambridge University before working as a researcher in Parliament and as a copy writer.

Virginia Woolf's seascapes, Thomas Hardy's Wessex, the moors of the Brontë sisters and the blitzed bombsites of Rose Macaulay have all informed her writing. She is particularly interested in the bonds between people and places.

The Sea Change,  her first novel, was picked by Richard & Judy as part of their 2013 summer book club and was also chosen as the 2014 Bath Literature Festival's Big Bath Read.

She lives and writes in Oxfordshire with her husband and two children and is currently working on her second novel, set on the remotest island on earth.


In one of the very first conversations between the two main characters of Lila, the old preacher remarks after talking about his past that "I suppose the next time I tell it, it will be a better story. Maybe a little less true. I might not tell it again. I hope I won't. You're right not to talk. It's a sort of higher honesty, I think. Once you start talking there's no telling what you'll say."

As with all the best novelists, Robinson has an uncanny ability to distill the theme of her entire story into just a handful of sentences. Lila is a novel that is full of these miniature epiphanies - glimpses of the bigger picture in the book's small details. The light and water and wind that pervade Lila’s experiences of both nature and the towns she passes through are all imbued with symbolism: the river that Lila bathes in outside her drifter’s hut; the cracks of light coming in through the curtains of the St Louis whorehouse, the lanterns hanging in the trees of the revival meeting where Lila is selling apples as a girl. Always laced into these physical details is a sense of the spiritual - or at least an interrogation of their potential symbolism.

Lila herself is constantly questioning the relationship between the physical world and the spiritual world and whether or not they overlap. Is there any room for the spiritual when life for Lila is simply a daily struggle to survive? This is a question that never really leaves her even after she is safe and warm with a roof over her head. Water and its ability to make her physically clean and quench her thirst is also the means of her baptism and spiritual rebirth. But this symbolism does not sit easily with Lila; she wrestles with its portent and what it means for her old way of life, which she looks upon with nostalgia as well as hopelessness. She refuses to let her life be reduced into a simple trajectory of sinner turned saint.

Lila is the third novel in Marilynne Robinson's critically acclaimed Gilead trilogy. It follows the story of an orphan drifter who is raised on the run by a woman called Doll and works in a St Louis whorehouse before arriving in the small town of Gilead and unexpectedly marrying the town's preacher.

The concept of a fallen woman made good might appear trite in the hands of a novelist less skilled than Robinson. But, just as Lila's inner life, richly enjoyed by the reader, remains a mystery to the man she marries, the plot's air of simplicity soon gains depth as the novel progresses.

Lila challenges many of her new husband's convictions about the nature of life and death and the notion of a spiritual journey where the old life is left behind for a new clean life. She prefers to see divine wonder and grace interwoven through each of her experiences from her childhood through to the story's present. This is reflected in Robinson's masterful handling of the narrative which weaves together memories from Lila's fraught past with her more comfortable present.

The complexity of human goodness and divine grace is also reflected in the fact that the first person to show her unconditional love is not the preacher but Doll who takes her from a place where nobody answers her cries and raises her as her own child - to Lila there is arguably more divine love in this simple maternal act than all the small Christian kindnesses shown to her in Gilead, which seem contrived in comparison.

Once again it is a physical act of love - that of a woman caring for a child - that provides the starting point for Lila's spiritual questions. Ames, her preacher husband, is happy to muse from the pulpit or on paper - he likes to write letters. But Lila's theology is altogether more physical and internal - rooted in the landscapes and objects around her and in the people she loves. Even her love of the preacher is conveyed more through physical objects than words: the smell of his woolen jumper which she takes to use as a pillow or his garden which she tends.

Her constant conversational refrain of "that's a fact" seems to underline this connection to the physical. And yet Robinson also bestows it on Lila ironically: unlike the preacher, Lila's thought life is composed of questions rather than statements. Since she cannot find answers for even the most fundamental of questions about herself - her real name, the identity of her mother and father - she questions the nature of everything that follows. She experiences the world empirically, only ever asserting as fact the feelings most familiar to her: hunger, distrust, the cold. She is always reluctant to commit herself to words because that would involve revealing the inner life she has guarded so carefully over the years.

The fact that Ames only ever knows his wife in part and it is only the reader who is privy to lila's thoughts perhaps tells us something about Robinson's own philosophy for the novel as a form: to reflect the loneliness of human experience - the fact that no one can ever truly know the thoughts of another, the constant divorce between thought and word, and how the novel can paradoxically in a small way remarry the two to act as windows into the souls of others.

When Ames remarks that the more a story is told the less familiar it feels he is conveying something of this paradox: the novel as an artistic form gives the reader both the impression of closeness to its subjects and yet a sense of distance too - one is, after all, escaping the real world for a set of fictional characters removed from our own experience. For Robinson there seems to be a spiritual truth buried in all this: Lila wrestles with a God who, in spite of people's flawed attempts to make him known, remains mysterious - a God of questions as well as answers.

Lila is published by Virago.
Posted by Linda Newbery at 00:00