Guest review by Fran Hill: AND AWAY ... BOB MORTIMER, THE AUTOBIOGRAPHY 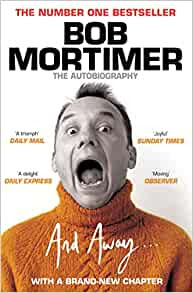 "He self-effacingly champions the underdog, perhaps because he himself has always felt a little underdoggy, if I’m reading him correctly." 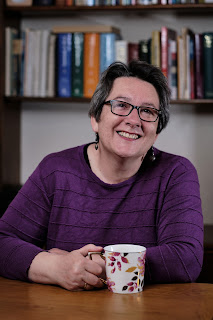 Fran Hill is a humour writer and retired English teacher from Leamington Spa. Her funny teacher-memoir Miss, What Does Incomprehensible Mean? was published by SPCK Publishing in 2020. Her first full-length novel Cuckoo in the Nest is about sibling rivalry in a foster care situation and will be released by Legend Press in March 2023.
I could start this review with ‘You know, Bob Mortimer of Big Night Out and Shooting Stars with Vic Reeves in the 1990s.’ You know.

But that would be disingenuous. Mortimer wasn’t on my radar until his coy but hilarious monologues on the BBC’s Would I Lie to You and appearances on Gone Fishing with Paul Whitehouse. When the autobiography came out in 2021, I impulse-clicked on ‘Order Now’ before I could check my bank balance.

I’ve caught up on those earlier shows now, thanks to Youtube. Some elements are so surreal, I’m left bewildered, but Shooting Stars grew on me. What improvisational genius!

If you saw the first episode of Gone Fishing in 2018, you’ll recall that it starts with Mortimer and Whitehouse bonding over potentially fatal heart conditions and consequent re-evaluations of life’s meaning.

And Away begins similarly in October 2015 when Bob is 56, his life ‘trundling along like a podgy golden retriever being dragged along the pavement by an indifferent owner’. He’s about to embark on a UK tour with comedy partner Reeves to celebrate 30 years in the business. But sudden chest pains propel him to a cardiologist. Tests show that up to 98 per cent of Mortimer’s arteries are blocked. Without urgent surgery, he is in immediate danger. The tour is on hold.

After that first dramatic chapter, the second flashes back to Mortimer’s Middlesborough childhood, and Part 1 of the autobiography is structured like this: a chapter about his slow recuperation from heart surgery, interspersed with coming-of-age stories, including the death of his father in a car crash when Bob is 8, the development of Bob’s shy personality after this, and his early law career. The book is pacy: Mortimer is handy with cliff hangers.

Part 2 recounts his accidental arrival into comedy. A friend invites the lonely, recently love-spurned Mortimer to a comedy night at the Goldsmiths Tavern in New Cross, London, where he encounters Vic Reeves Big Night Out. He says, ‘I felt like I had seen the past, the present and the future of comedy.’ Weeks later, Reeves invites Mortimer onto the stage to play a bit part and the seeds of their farcical double act are sown.

In Part 3, Mortimer tells us about Shooting Stars, the surrealist and bizarre game show that found fame in the early 1990s, with 72 episodes over 8 series and with celebrity guests, some clearly less comfortable with the nonsense than others. Regulars included Ulrika Johnson, Matt Lucas, and Mark Lamarr.

Mortimer also describes his failures. For example, an attempt at proper, scripted TV acting teaches him that his talent is in improvisation: ‘It seems that maybe the one context where I can actually act is where there isn’t any script – just good, old-fashioned storytelling.’

The final sections include detail about Gone Fishing and necessary lifestyle changes since his heart surgery. He also honours key players in his life: his wife Lisa, mum Eunice, and his comedy partner, Vic Reeves. His portrayal of his mother throughout is affectionate and funny: he includes a list of things she taught him, including ‘How to tell if a melon is ripe’ and ‘A blanket beneath you is worth two above’.

He adds similar tips of his own, including 'Keep the filters clean in all your appliances’ and ‘Tired of pie, tired of life.’

Mortimer’s essential kindness and gentleness thread through the book. His degree was in Welfare Law and he self-effacingly champions the underdog, perhaps because he himself has always felt a little underdoggy, if I’m reading him correctly.

Mortimer plays with our minds a little. Watch out for the Would I Lie to You chapters in which he mirrors the show’s format by relating a series of incidents, one of which is complete fantasy. It’s fun guessing.

Similarly, a final final chapter, placed after the chapter entitled The End, is about his favourite music including an obsession with Joni Mitchell.