Guest review by Sally Prue: THE LORD OF THE RINGS by J R R Tolkien 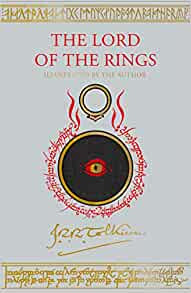 "Devoted admirer though I am of The Lord of the Rings, there's no disputing that it has led to a lot of trouble ... "

Sally Prue is a writer for children of all ages, from picture books up to Young Adult fiction. Her novel Cold Tom won the Branford Boase Prize and the Smarties Silver Award, and Song Hunter won the Historical Society’s Young Quills Award. Her other jobs have included being a Time and Motion clerk, an accompanist, and a piano and recorder teacher. Sally is married, has two grown up daughters, and lives on the edge of a small but very beautiful wood in Hertfordshire, England. She blogs at The Word Den and is also to be found on her website and on Twitter: @sally_prue.
(This review first appeared in Norman Geras' Normblog.)

Sending a book out into the world is an unnerving experience for a writer, as once people have got hold of it there's no knowing what they will think. For example, I have been lucky enough to receive several reviews containing kind mention of a character called Alice... but there is no Alice. There never was an Alice in any of my books. The girl I think they have in mind is called (wait for it) Stefanie. And she always has been.

Hold on to that thought, if you will, whilst we pay a visit, as I did recently, to Leominster, an English country town boasting many splendid hanging baskets and a heritage centre that is quite often open. And on a corner near a pub (I can't actually remember the pub, but most places in old English towns are near pubs) is a shop window displaying some extremely surprising weaponry. There is, for example, 'Sting', which, as every Lord of the Rings fan knows, is an elfish blade with the handy (unless hiding in the dark) habit of shining blue when in the proximity of orcs. There one can also, if over the age of sixteen, buy what purports to be Arwen's sword, which I don't remember from the book; and there are several other pieces of lethal Lord of the Rings equipment. Which just goes to show that there are a lot of nutters about – though presumably not in Leominster, or they would have bought up the shop.

For, devoted admirer though I am of The Lord of the Rings, there's no disputing that it has led to a lot of trouble. There are all the palely imitative books of quests, holy violence and silly names, for a start; then there are the hundreds of computer games, the sword-waggling role-players, and the couple of film adaptations. The last of these was, admittedly, hugely impressive. (Indeed, the only experience that has come close, for me, to the vertiginous awe of zooming over the Isengard of Peter Jackson's version, was once at the Comedy Theatre, looking down from the gods at Dawn French's cleavage.) But even this colossal film consists largely of nazgul, orcs, trolls, balrogs and wargs, from none of whom one would ever even dream of buying a second-hand car.

Yet, as has been elegantly argued on Normblog, a person isn't necessarily to blame for an indirect consequence of his actions. I myself don't see The Lord of the Rings primarily as a promoter of picturesque violence; and, what's more, I don't think that Tolkien did, either. I don't think the book is fundamentally about kings, or magic, or any of the related snobberies that so many of its fans delight in. It's true that there are heroes of ancient lineage (though the heir to the greatest throne is poor, alone, incognito, rather ugly, and seventy years old), and people do spend a lot of time knocking seven bells out of each other; but all that willy-waving and bending-of-the-knee isn't important. It's just a very beautifully and intricately realised and fascinating side-show. In The Lord of the Rings all power, for good or evil (and most power is shown accelerating with horrible rapidity towards evil), is ultimately futile. It's the little man who's vital, as he creeps, trembling and wounded, to victory (of a sort) while the big pretty fellas are busy marching magnificently hither and yon. The book chronicles the splendour and terror of the gods (OK, they're called elves or wizards here, but in their beauty, song and immortality they have much in common with gods), but it shows their fading and banishment, too; and man himself is depicted in his irresistible diminishment from hero to humanity. How about that? Just about the whole history of literature in one book. But then, epics are, most often, accomplished in retreat.

I first read The Lord of the Rings as a teenager. It was the first long book I ever read, and perhaps the first grown-up book I ever enjoyed. It has adventure, and humour, and horror, and a great variety of styles, and blokes I fancy (that Faramir, eh? Cor!) and love and comradeship and a huge delight in the miraculous beauty of the natural world. There is, it's true, a race that views warfare as the pinnacle of its civilization, but, hey, in the end all their proud warriors are outfought by a hobbit (a half-sized, ignorant, and unassuming countryman, basically) and a girl. The language in which they do it! And so King Theoden departed from his realm, and mile by mile the long road wound away, and the beacon hills marched past: Calenhad, Min-Rimmon, Erelas, Nardol. But their fires were quenched. All the lands were grey and still; and ever the shadows deepened before them, and hope waned in every heart. Oh, the pity of it! I remember my husband reading that bit to my children by the meagre light of our tent's flickering gas-lamp.

But in the end, for me the book isn't about the soldiers (though, a book that means many different things to many different people isn't a bad definition of a masterpiece). For me The Lord of the Rings is about the triumph of the modest and ordinary; and this happens, essentially, because the extraordinary and immortal cannot evolve to fit into a new world-order. The world is saved (or, more accurately, some of it is able to continue) because pity for the weak triumphs over self-preservation and even justice; and Tolkien leads us to feelings of pity, too: to the pity of a creature degraded by guilt and long suffering almost to the point of being a beast. Tolkien watches the passing of many things, lovely and hideous, weak and strong, heroes and demons, and he mourns and celebrates in equal measure. The Lord of the Rings is a valediction to much that is most valuable; but it is also a benediction on the new, though less splendid, world of the common man.

A writer of another famous long book, Philip Pullman, was quoted recently as saying that The Lord of the Rings tells us nothing about the human condition. Well, let me leave you with a passage from Tolkien's trilogy that marked the moment when I first grasped my own mortality. It's spoken by an old, lonely creature who was himself once almost a hero.
I sit beside the fire and think
of how the world will be
when winter comes without a spring
that I shall ever see.
The Lord of the Rings is published by Harper Collins.
More reviews by Sally:
Mr Weston's Good Wine by T F Powys
The Dean's Watch by Elizabeth Goudge
Emma by Jane Austen
Posted by Linda Newbery at 00:00

Lovely review. I agree: all of literature and human history is encompassed by The Lord of the Ring. And it is about the vital role of the small person who succeeds through the loyalty and confidence he engenders in others.