Guest review by Graeme Fife: AT THE EXISTENTIALIST CAFĒ - FREEDOM, BEING & APRICOT COCKTAILS by Sarah Bakewell 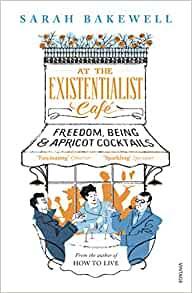 "Bakewell has sailed what might have been tempestuous waters with assurance, understanding, sympathy and love." 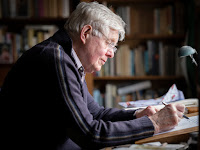 Graeme Fife is a regular reviewer here. He has written many plays, stories, features and talks for radio, stage plays and articles for newspapers and magazines, and is a regular contributor to BBC Radio 4's From Our Own Correspondent. He's the author of a string of books - children's stories, biography, works of history and fiction. His novel of the French Revolution, No Common Assassin, tells the story of Charlotte Corday.
Philosophy…brilliant minds describing society as it could, should be? The crux is language. Imannuel Kant speaks of Ding an sich which we may translate ‘the thing itself’. Fine, but what is thing in this or any application? From universal thing we move to the mystery of being … the essence of humankind? The core, impression, elusive oneness of One? Philosophy can be a trial and I’ve always found it baffling, often beautiful in many respects, but a cerebration too far in most. I therefore came to Sarah Bakewell’s At the Existentialist Café: Freedom, Being and Apricot Cocktails, captivated by her wonderful study of Montaigne in How to Live, more drawn by cocktails and the company of the people drinking them in the Paris café – de Beauvoir, Sartre and their friend Aron – than by the inevitable task of coping with more rarefied talk of disquisition and the quests and riddles, byways and shadowy alleys down which ‘love of wisdom’ may lead, numb-headed as this must seem, be. How foolish. All this before I’d read a page? There’s so much more.

The context of the book, beyond the intellectual thinking and talking shop of the Latin Quarter cafés in Paris, animates its narrative. Between the two wars, all Europe was in turmoil. About Germany we know, too well; in Britain, too, the faltering of all that had been certain and the shocking prospect of uncertainty: foundations of the old order rocked, ancient empires blown away. No system of thought was safe from question, now. France, a nation deeply divided on many fault lines for a long time, saw a brief ascendancy of the Left: socialism and communism offered, apparently, an answer to, through challenge of, the domination of the Establishment namely accepted wisdom, rooted tradition, all that was sure, innate, even benevolent before that very Establishment oversaw the horrors, the devastation of land and wholesale slaughter, 1914-18.

Bakewell is particularly astute in exploring the climate of Occupied France and the moral dilemmas it threw up: Patriotic or Personal? Nation or Friend? Protest – violent or non-violent? Discuss. Thought of itself can be arid and off-putting. What counts equally is the heart of the story not its clothes and jewellery.

To Paris came news of phenomenology, a philosophical approach to knowledge and understanding which originated with Husserl in Germany, a country whence so many of the modern thinkers had come. I attempt no definitions here. Bakewell’s learning and clarity deserve better than any amateurish upstaging. That said, from the intense deliberations of the threesome in a café over its famous apricot cocktails came the enunciation of a way of thinking about human affairs christened existentialism…ah, existence. How, in this new cosmos when all seemingly permanent structures had been near shattered, even obliterated, to consider humanity’s place and purpose? Perhaps by looking, just that, looking at what’s there still, a kind of permanence. Greek phenomenon means 'that which appears, is visible’. Simple? Far from it and Bakewell is a wonderful guide. Her clarity – and passion – for and about the subject informs a story which could so easily threaten to overwhelm.

She investigates a process of thought about the entanglements of morality imposed by new order which had eroded certitude to a degree unimaginable hitherto. More than a starting anew, a need to address a wholly different problem. ‘A future humanity living in isolated pods beneath the Earth’s surface’ as E M Forster imagined in a short story? Huxley’s Brave New World? As Bakewell writes of commentators on this disintegration: ‘They set out to detect and capture the quality of experience as we live it rather than according to the frameworks suggested by traditional philosophy, psychology, Marxism, Hegelianism, structuralism or any other of the -isms and disciplines that explain our lives away.’ Add, for example, that the French Revolution foundered, in large part, because the small-minded bigots at its heart, the drivers of its bloody excesses, believed, that virtue or, in their word, civisme, being a good egg in Whitehall parlance, could be inculcated by law and edict.

From that age of Fascism, a violent curse out of the perverted sense of rectitude imparted by a weighted fist, Bakewell cites Paul Ricoeur, a pioneer of the new thinking: ‘The relentless persecution of this man (a Czech activist) proves that, in the event of a people’s extreme abjection, philosophical pleading for subjectivity is becoming the citizen’s only recourse against the tyrant.’ Subjectivity? Feeling. Humanity.

Bakewell has sailed what might have been tempestuous waters with assurance, understanding, sympathy and love. It’s a story that needed to be told on issues which demand consideration.
At the Existentialist Café is published by Other Press (NY).


Read this Q & A with Graeme about his novel of the French Revolution, No Common Assassin