THE HIGH HOUSE by Jessie Greengrass, reviewed by Linda Newbery 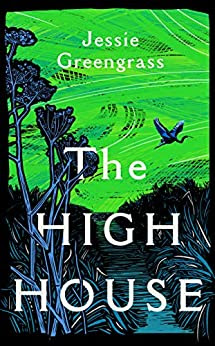 "A disastrous near future that could be the day after tomorrow..." Linda Newbery edits Writers Review. She has published widely for young readers of all ages, winning the Costa Children's Book Prize with her young adult novel Set in Stone. Her latest title is non-fiction: This Book is Cruelty Free - Animals and Us, a guide to compassionate living. She is currently working on a new adult novel.

When I think of the hot summer days of childhood, my memories are of a paddling pool in the garden, adults resting in the shade, the jingling tune of the ice-cream van; maybe a day at the seaside and sunburned skin in the days before we knew to take more care. We enjoyed it while it lasted, before the heat disintegrated into a thunderstorm and the days became cooler. Now the feeling is different, threatening. What if temperatures continue to rise and become unbearable? What would be the effect on wild animals, vegetation, crop-growing, and even human ability to survive? What if huge areas of the world become uninhabitable?

In The Great Derangement, recently reviewed on this blog by Jane Rogers, Amitav Ghosh asks why literary fiction so comprehensively ignores the climate emergency, the most pressing issue of our times, and why those novels that do deal with it tend to be sidelined into genre fiction. His book was published five years ago. Since then we've seen Richard Powers' The Overstory deservedly shortlisted for the Booker Prize, and Melissa Harrison wrote in The Guardian that "the 'cli-fi'  genre is growing exponentially – no surprise, given the coming crisis. In fact, as an artist in any medium it can feel self-indulgent, in 2021, to be making work about anything else."

Now here's another novel that puts climate breakdown centre stage, set in a disastrous near future that could be the day after tomorrow. Although to climate change deniers it could be seen as science fiction, the sense of foreboding in the early section of the novel - flooding, changes in the seasons, dangerous cyclones, migration patterns disrupted - is all too familiar to anyone seriously concerned about human impact on the planet.

With its focus on a group of isolated survivors, the novel reminds me of Robert C O'Brien's Z for Zachariah and Edwin Muir's haunting poem, The Horses. The High House is located somewhere unspecified on the east coast of England (the nearby church with its carved angels and the shifting of the coast and river call to mind Blythburgh and Dunwich). Unknown to teenaged Caro, her stepmother and father have been meticulously preparing this house as a refuge for when disaster strikes; stepmother Francesca, environmentalist and climate campaigner, is more aware than most that the ways of life we take for granted cannot endure. "She didn't have the habit that the rest of us were learning, of having our minds in two places at once, of seeing two futures: that ordinary one of summer holidays and new school terms, of Christmasses and birthdays and bank accounts in an endless uneventful round. And the other one, the long and empty one we spoke about in hypotheticals, or didn't speak about at all."*

Just before he and Francesca are lost in a violent cyclone that hits Florida, where Francesca is speaking at a conference, Caro's father tells her to take her toddler stepbrother Pauly to the High House, urgently. Caro resents Francesca for neglecting Pauly in favour of campaigning, but becomes equally critical of herself for devoting herself to him as a means of shutting off from the catastrophic wider situation. Arriving, Caro is surprised to find the house already inhabited and grounds well-tended, by the practical Sal and her wise grandfather, Grandy, recruited as custodians by the prescient Francesca. When the floodwater comes, inundating the village and drastically changing the shape of the land, this little group is safe on its bulwark, carefully husbanding their resources, growing crops, keeping chickens, preserving fruit and vegetables. We move into a future where the rest of the world seems to have disappeared; as Pauly matures and is given his own viewpoint, we realise what limitations these young people have accepted, and how they must cope without medical treatment beyond what they can provide for themselves.

The novel is saved from bleakness by the immersion in daily lives, the tenderness between Caro and Pauly, Sal and her grandfather, the small satisfactions of daily life and self-sufficiency and even moments of joy. But it's a stark warning too: how we take for granted that there will be power at the flick of a switch, food available in shops or delivered to our door, "that vast net which, invisible, imperceptible, held us up," and how ill-equipped we'd be for survival if these systems failed. It's also a hymn to the natural world and a reminder of how much we face losing if we continue to behave as if the Earth's resources were infinite. "You think that you have time," Grandy says. "And then all at once you don't."

The High House is published by Swift Press.
The Bolinda unabridged Audiobook is narrated by Mariam Abu-Hejleh, Sam Newton and Camilla Rockley.
* I listened to the Audiobook, so the punctuation and sentence breaks in these quotations may differ from those in the print edition.

The Overstory by Richard Powers, reviewed by Tracey Mathias