Guest review by Tracey Mathias: THE OVERSTORY by Richard Powers 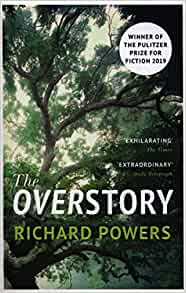 "A novel for the Anthropocene, for an age of mass extinction brought about by human action: it portrays Nature as we need to understand it now: not as stable and enduring but in a state of catastrophic change." 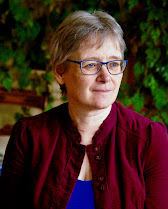 Tracey Mathias grew up in Cardiff but has lived for more than half her life in London. She has three grown-up daughters, and has been writing for children since they were small. She is writer in residence at the DaCapo Music Foundation, writing song lyrics and performance pieces, and is the author of the fantasy trilogy Assalay. Her latest book is Silence is Also a Lie (originally published as Night of the Party) – a Young Adult love story, mystery and political dystopia set in a near future England.
The Overstory deeply impressed and affected me on first reading: I have already reread it and imagine that I’ll return to it more than once in the future. It feels like a necessary book for our age, and one that opens up possibilities for what can be done with fiction.
There are so many things to admire here. Powers’s prose is beautiful, precise and lyrical. He interweaves the stories of a large cast of characters with skill and poise: introducing them in a series of vivid biographical vignettes and then following them over a broad sweep of time from early years to late adulthood. But more than anything, I am struck by the ways that he imagines and writes the natural world.
The trees and forests that dominate the novel are described with the kind of clarity and loveliness that comes from close observation. The ‘pinnate leaves’ of an ash tree ‘feather the light and make life feel softer than it is.’ The trunk of a redwood is ‘a triple wide door of darkness into the side of the night.’ In the ‘twilight-green’ air of an ancient forest ‘clicks and chatter disturb the cathedral hush.’
These descriptions are not static, either, but full of dynamic life. There’s a running theme about time and the relativity of time here. The novel’s computer genius (whose pioneering games act as analogies for so much else: codes branch; a bestselling game involves the competitive extraction of value from a virtual Earth) remembers a snippet of sci-fi. A race of aliens move so fast that ‘Earth seconds seem to them like years’ and humans ‘nothing but sculptures of immobile meat.’ By analogy, we must see trees in ‘tree time’ to understand them not as static, but as active, moving and purposeful beings, and the energy and vibrancy of Powers’s language does just this: a chestnut ‘spirals’ into the sky; trees in a forest ‘fight for scraps of light’; the roots of Douglas firs ‘run into each other underground.’ And Powers doesn’t only give us poetic description, but poetic science. The book is rich in fascinating botanical detail, especially in those passages written from the perspective of a plant scientist whose major interest is the social life of trees: the ways in which they communicate, co-operate and form communities.
So narrative doesn’t just belong to humans: trees have their own stories of change and relationship. They’re also deeply entwined with human stories (the novel itself takes the form of a tree, imagining human life as roots, trunk, crown and seeds). Trees are emblems and instruments of human history, love, fate, tragedy, and there’s a hint of mystical connection, in the synchronous flourishing and declining of people and trees.
But, crucially, this is also a relationship of tragedy and damage. The Overstory is a novel for the Anthropocene, for an age of mass extinction brought about by human action: it portrays Nature as we need to understand it now: not as stable and enduring but in a state of catastrophic change. The novel is elegiac, all its beauty threated with the awareness of what we have lost and stand to lose. Some of the most painful passages in Roots describe the blight that wiped out the great chestnut forests of the US east coast, and the main driver of the plot is the protest against the felling of virgin redwood forest on the West Coast. Powers offers no easy reassurance for the future. There is, one character reflects, a war between trees and humans ‘over the land and water and atmosphere. And she can hear, louder than the quaking leaves, which side will lose by winning.’
Beautiful, painful, urgent: this is an important book.
The Overstory is published by Vintage.
Posted by Linda Newbery at 00:00