Guest review by Yvonne Coppard: THE BEEKEEPER OF ALEPPO by Christy Lefteri 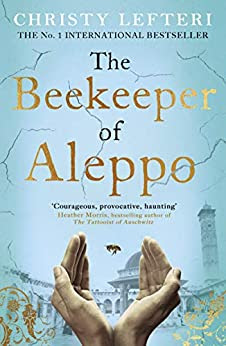 " ... truly brought home to me the lived experience of the people behind the daily headlines, and the astonishing power of the human spirit to endure and overcome."

Yvonne Coppard is a Writing Fellow of the Royal Literary Fund and writer of fiction for children and adults. See more on her website.

Nuri and Afra live peacefully with their young son, Sami, in the hills above Aleppo. Afra is a talented artist; Nuri and his cousin, Mustafa, are beekeepers running a successful honey business. When Syria descends into chaos and violence, Sami is killed and Afra is suddenly struck with trauma-induced blindness. Still, they cling on, hoping for better times. Then the beehives are destroyed, Mustafa flees the country and Nuri is threatened by soldiers who later come to the house looking for him.
"Our feet sank into inches of water, full of the lizards and insects that had made this space their home. I’d dug this hideout last year. Afra wrapped her arms around me and buried her face in the crook of my neck. We sat like this in the darkness, both blind now, in this grave made for two. In the deep quiet her breathing was the only sound left on earth. And maybe she was right. Maybe we should have died like this and nobody would need to take our bodies … above us and outside things moved and broke and cracked. The men must have entered the house now."

After this, there is no choice but to leave. Nuri and Afra put themselves into the hands of people smugglers and make the perilous journey through the various camps in Europe for displaced people, heading for the UK where Mustafa has found asylum. The story of their flight is told by Nuri, mostly in flashback, while they are in temporary accommodation awaiting a decision about their future from the UK authorities.

The desperation that drives people to undertake such a terrifying journey with scant hope of success is conveyed so convincingly that, even though I knew Nuri and Afra had survived, my heart was in my mouth as Nuri recounted their experiences. Nuri is sometimes aware of hallucinations and periods of disconnection but does not connect them with trauma. He hides his symptoms from the friendly social worker, fearful that he will be dismissed as mad, desperate to keep some last shreds of dignity.

Christy Lefteri spent time as a volunteer in a refugee camp in Athens. That experience shows in the detailed, vivid story woven from what she saw and heard there; a convincing account of loss, betrayal and, ultimately, resilience. It is told with warmth and compassion and touches of gentle humour. The level of detail and the authenticity of the places and characters created makes it impossible not to be drawn in to, and moved by, Nuri and Afra’s dogged stoicism. In the face of unspeakable things, they refuse to give up hope. This book is first and foremost a compelling, page-turning novel, devoid of the strident political messages and sub texts that often infuse what we see and hear in the media about refugees, asylum seekers and economic migrants. It is the first fiction I have read that truly brought home to me the lived experience of the people behind the daily headlines, and the astonishing power of the human spirit to endure and overcome.

The Beekeeper of Aleppo is published by Bonnier.
See also: The Optician of Lampedusa by Emma-Jane Kirby, reviewed by Tracy Chevalier
More reviews by Yvonne Coppard:
Flaneuse by Lauren Elkin
Plainsong by Kent Haruf
The Outrageous Fortune of Abel Morgan by Cynthia Jefferies
Adventures in Human Being by Gavin Francis