Guest review by Graeme Fife: WHAT A CARVE UP! by Jonathan Coe 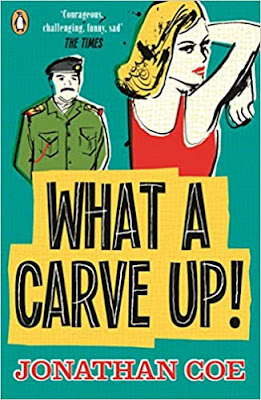 "This exceptional novel is funny, shocking, merciless. But there is great tenderness in it, too ... "

Some reflections on satire.

The acidulous Roman poet Juvenal, a satirist of ferocious bile, no great smiler, described the subject matter of his work as a farrago of all human activity – wishes, fears, anger, pleasures, joys – and the Latin word satura, meaning a hodge podge stew, seems to have some radical links with satire itself. Jonathan Swift spoke of the driving force of his own satire as saeva indignatio, savage, as in wild beast, indignation as in rage at the unworthy. Imagine the satirist’s tools as medical instruments: the scalpel of intelligence, the lancet of insight, the defibrillating pads of indignation and the saline drip of laughter, denounced by the tyrant King John – ‘that idiot, laughter…a passion hateful to my purposes’. O, how the swaggering, dimwit bully hates to be scoffed at. (White House: copy.)

To this design of scrutiny, the investigation of human corruption, enter Jonathan Coe, a writer of formidable skill, brio and intelligence. This exceptional novel is funny, shocking, merciless. But there is great tenderness in it, too, a tenderness expressed in the lives of certain of the characters who are unwittingly caught up in the main action of the story which centres on the activities, sinister and deeply immoral, of the members of two generations of the Winshaw family. Landed not-quite toffs, rich, unprincipled, influential and without a single Brownie point for decency among them.

You know, by now, that it is never my policy to outline the plot or substance of the narrative of a book. No spoilers. Simply, this is a glorious treat. The Winshaws form a gallery of grotesques, in the best tradition of all blistering satire from Aristophanes on. Coe holds nothing back in his dissection of grubby motive, calculating greed, shallow flamboyance, cynical exploitation, misuse and abuse of those whom they might call necessary victims of their manipulation, and if this begins to sound rather too bitter, be assured, the aloe of Coe’s fury is most adroitly sweetened with a generous frosting of riotous humour. It’s almost beyond me to restrain myself from quoting a particular example of that humour which packed such a jolt, a full volley of outrageous self-absorption, in one of the Winshaw nasties. No, you must find it yourself and enjoy the delicious moment, the shattered glass, as it were.

It’s not often that a novelist cites such an extended list of books – of reference and description – in the acknowledgements, but it’s very clear from the text itself, that Coe has carried out meticulous research into various areas which demand a high level of precision in the matter of the narrative and in the cruel detail of what is being perpetrated by the villains on whom the focus rests. The sale of arms, the corruption of the food chain, the lies, falsehoods and blatant contradictions of popular journalism, the contamination of morals, an undercurrent of mystery about the death of one of the Winshaw sons, all overlaid with the bilious sheen of hypocrisy, the ruthless profiteering…

The title comes from a film whose storyline frames the plot of the novel. It’s a trope of a connection but one with which Coe plays a mischievous game of hide and seek. Secret doors, labyrinthine subterranean passages, mirroring the devious miscreance of the family, in a Gothic pile stuck on a windswept moorland in Yorkshire, a decrepit butler who’s served the family for years, his crumbling physique pointing up their moral decadence, and an ageing maiden aunt, who may not be as daft as the family claim her to be, banged up in an institution by a malevolent brother.

Into the picture come innocents drawn in for various reasons, hapless, but not stupid, participants in the drama that clutches at them with grasping and fraudulent purpose, reckless criminality cocooned in the PPE of privilege and money, but insulated by their innocence. If the villainy doesn’t quite brush off them, it doesn’t cling and their very contrasting humdrum existence stands as a relieving foil to the dark antics of their would-be tormentors. It’s part of Coe’s deft brilliance that he avoids all sentimentality, that his characterisation is considered, rounded, truthful. Grotesques, I say, yes, but all entirely credible, if written large, as satire must always be to deliver the full force of dismay. Can people be so depraved? Is it really true that fortunes are made out of the misery of many by a grasping few? Do tyrants actually think along the lines of never missing the opportunity presented by a disaster? Is lapis lazulis blue?

Coe’s novel is a cracking story, a novel of great humanity, a perfect exemplar of the true satirist’s propulsion: saeva indignatio.


What a Carve Up! is published by Penguin.

A Telling of Stones by Neil Rackham
West of Sunset by Stuart O'Nan
Adolfo Kaminsky: a Forger's Life by Sarah Kaminsky
Uncle Silas by Sheridan Le Fanu
Beside the Ocean of Time by George Mackay Brown
Moby Dick by Herman Melville