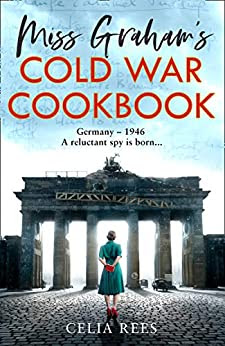 "There is a definite magic in that first moment when the ideas begin to swarm together ..." 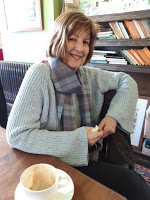 Celia Rees is a leading writer for Young Adults with an international reputation. Her titles include Witch Child (shortlisted for the Guardian Children's Fiction Prize), Sorceress (shortlisted for the Whitbread - now Costa - Children's Book Award), Pirates!, Sovay and Glass Town Wars. The chance discovery of an old family cookery book has now taken her writing in a new and different direction. In 2012, she began researching and writing her first novel for adults, Miss Graham's Cold War Cookbook, out now. Here she answers questions from Adèle Geras and Linda Newbery.
Twitter: @CeliaRees Instagram: @celiarees1
Linda: The idea of using recipes to conceal coded messages is such a clever one, used to brilliant effect throughout. How did you think of it?

Celia: I found a battered old cookery book among my mother's effects and was both intrigued and moved by the handwritten recipes that I found inside. I recognised my mother's writing, my aunt's and what I took to be my grandmother's but I'd never seen the book before. It was pre-war and must have belonged to my grandmother, then passed to my aunt and on to my mother who must have kept it when my aunt died. I'd been executor for both my aunt and my mother and had found no letters. These recipes were the only written connection between these women. There was something I wanted to write about in that but I didn't know what it could be. Years later, I was in the Imperial War Museum with my daughter. We discovered that the British Zone in Post War Germany had been a hotbed of spying. My aunt had been there. Could she have been a spy? On the surface, the idea was ridiculous. My respectable, Head Mistress maiden aunt a spy? But then again, it was perfectly possible. She had led a bit of a hidden life... If she was a spy, how would she pass on messages? I thought of the handwritten recipes passing between women. The two ideas connected and I knew I had a book.

Adèle: Apart from the personal link of the recipe book, can you identify what it was that drew you to the story of some of the things that went on both before and more especially after the War? It's not a subject I've seen written about before.

Celia: I began to research Germany in the immediate post war period and was shocked by the utter chaos: the widespread physical destruction, the lack of even the most basic foodstuffs and the millions of displaced persons there from all over Europe. The Germans call midnight on 8th May, 1945, 'Stunde Null' - Zero Hour. In and amongst all this, there were Nazi fugitives hiding in plain sight. They were being hunted but not always to be brought to justice. The Allies were looking for useful Nazis even before the war ended, not just rocket scientists like Wernher von Braun, but others, too. Anyone who might be useful because the world was turning, the Cold War starting and Germany was the country where the erstwhile Allies met. I found this intensely interesting. By one of those chance things, on a visit to the Jewish Museum in Paris, I saw a chilling group photograph of doctors and nurses lined up outside a hospital, a mental facility, part of the Euthanasia Project which was devoted to systematically killing patients deemed 'a life unworthy of life'. I knew almost nothing about this and found it deeply shocking and I thought it should be more widely known.

Linda: How did you find the confidence to write about this period and these settings, with so much complexity involving the different factions, protocols and motives? What was the most difficult thing to find out?

Celia: I did a lot of reading and didn't start writing until I felt I was in command of at least the basic facts and knew where to go if I needed to know more. The most difficult things to find out were the details of the day to day lives of the people living and working in Germany. There are plenty of books about various aspects of Post War Germany but not many which tell you how much the butter ration was or how a billet was organised. I had to go to the Imperial War Museum and read the letters and diaries of women working for the Control Commission. The food was difficult, too: finding menus, dishes, recipes. I'd set myself a bit of a challenge with that!

Adèle: This novel is what's known as multilayered. Several time frames, quite a few different narratives going on at the same time. Did this give you any particular problems? Did you go through various versions before arriving at the ideal order?

Celia: I didn't have a problem with the framing device, that was always set. If I had a problem, it wasn't so much with the order of events but the order of telling, especially the flashbacks, which couldn't be jettisoned because they carried vital backstory that the reader needed to know. The trick is to know where to put them, then weave them into the thought patterns of the close third person narration in a way that seems entirely natural and doesn't disrupt the main narrative thrust. That took a bit of working. For a while I had a reader who didn't like flashbacks and that made things difficult!

Adèle: One of the things I most love about this book (and indeed about all your writing!) is the care and love you give to things like descriptions of clothes and settings. Did you have to fight editors about keeping this detail intact? In my experience, they sometimes want to cut a lot of that.

Celia: We share that, Adèle. I love all those details. There was a brilliant exhibition at the Imperial War Museum, Fashion on the Ration and a great book to go with it by Julie Summers and that was a huge help. It's strange how things like that pop up just when you need them. I like researching clothes and makeup. It's fun and I can spent all afternoon on the internet chasing down the right hairstyle or shade and make of lipstick, but these kinds of details help to accurately evoke the period. Clothes, hairstyles, makeup, jewellery, accessories are important in other ways, too. They tell you a lot about the woman wearing them and at a time when so much was rationed, where and how she acquired them tells you what is going on at street level. I didn't have too much trouble from my editors. Luckily, they could see the value of that kind of detail.

Linda: In similar vein, I was struck by the scenes of utter devastation in the cities and suburbs - you describe them so vividly. Were these derived from photographs and first-hand accounts, and where did you find them?

Celia: My aunt had photographs of ruined cities and ships half submerged in harbours. Some she'd sent to my mother, so I remember seeing them as a child, others I found in her effects. There are plenty more on the internet. One thing people did was take photographs of the devastation. Touring the ruins was quite the thing to do. I also found eye witness accounts of Hamburg and Berlin, so I had those for reference.

Adèle: Is the Swiss hotel based on a real hotel?

Celia: Yes, it is. The Beau Rivage Palace. I haven't been there but it looks fabulous! I bought a vintage post card and trawled their website. The wonders of the internet!

Linda: You obviously visited Lübeck for research - did you visit other settings for the novel, for instance Vipiteno Sterzing?

Celia: I did visit Lübeck, also Hamburg and Berlin but I didn't get to Vipiteno Sterzing. Again, internet to the rescue: tourist information and TripAdvisor, also Google Maps and Google Earth. I did cheat a little bit and put a lake where there is no lake...

Linda: Often, when a writer is researching, something crops up that's a gift to the plot, or that's useful thematically. Did you come across any unexpected bonuses of that kind?

Celia: There is a definite magic in that first moment when the ideas begin to swarm together. After that, you are on a journey and it is remarkable how things pop up, exhibitions that are on just the right subject, a chance find in a bookshop or the person you just randomly met and who is actually from Lübeck and whose aunt and uncle still live there and would love to show you round the city. The most surprising the thing was how my aunt's seemingly unremarkable life and character lent itself so perfectly to this kind of novel, especially when I found a box of bullets hidden in her writing case. I took that as a Sign! Maybe she had been a spy after all...

Adèle: If this became a movie (which it should!) who would play Dori, Edith, Kurt and Harry? (Ps. I know who I'd like to play Elisabeth: was in The Night Manager.)

Celia: Endless hours of idle speculation... Well, and they are a bit disparate but I think Anna Maxwell Martin would make a good Edith, Rachel Weisz as Dori, Thomas Kretschmann as Kurt, Cate Blanchett as Elisabeth (although, agree Elizabeth Debicki if Cate unavailable) and Ben Whishaw as Harry - I had a photo of him pinned to my board!
Miss Graham's Cold War Cookbook is published by Harper Collins. 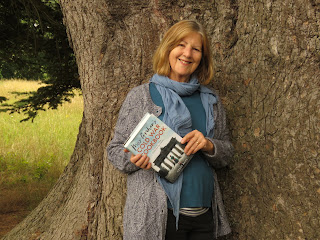 Photograph of Celia Rees at Compton Verney, by Linda Newbery. Compton Verney is the setting for many a conversation about books in progress, and also where Writers Review was first hatched, four years ago.