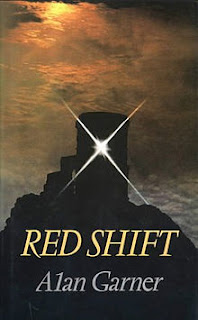 "Challenging in the true sense, it makes demands on the reader and demands to be read and read again."

In a Lecture given in 1975, Alan Garner said that each of his books could be seen as an expression of a different myth. For Elidor we should look to Childe Rolande and Burd Ellen; The Owl Service to Lieu, Blodeuedd and Gronw from the Fourth Book of the Mabinogion. And Red Shift? The Ballad of Tam Lin. Unlike The Owl Service, the connection is not obvious, not to this reader anyway, but it is typical of Garner that, once seen, it is clear. The story of the earthly knight trapped in elfin form by the Fairy Queen then snatched from her clutches by plucky young Janet who pulls him from his horse, holds on to him through some fierce shape shifting and finally cloaks his naked body in her green mantle thus saving her love and the father of her child, informs and infuses the novel in a deep kind of way, barely discernable on the surface but THERE.

Once one knows, then this layer of this multi layered work becomes obvious.  At the beginning of the novel, modern star-crossed lovers, Tom and Jan, are separated by class and soon to be by distance. She is the daughter of doctors while he lives with his working class parents in a caravan. She is moving to London while he will be staying on at the caravan park. Tom is a troubled young man, highly intelligent, at odds with his parents, hypersensitive and barely in control of his emotions. Another reference, in a book with many references, is to Tom o’ Bedlam in King Lear. The novel starts with the two lovers looking down at the M6 motorway as they contemplate their parting. The novel is, of course, set in Cheshire, a county with deep resonance for Garner. As in all his novels, place is as important as myth (myth of the place most important of all) and place is key to the different strands of time that run through the book. The two modern lovers inhabit and wander through a landscape that has been inhabited before. Tom’s caravan park is at Wulvern, the site of an ancient burial mound; they take an ancient track leading from Crewe Station across railway sidings to the village of Barthomley and finally to Mow Cop, a place of ancient sanctuary and 'the netherstone of the world' on which 'the sky mill turns...to grind stars'.

The novel shifts back and forth from the present to Roman Britain and the English Civil War. The times are linked not just by place, but by the night sky. The lovers are linked by the moon and Orion even when they are far apart. This links them, in turn, to pairs of lovers in the past.  They are also linked by a votive Bronze Age stone axe head that is discovered and kept by each of the troubled young men and the strong young women who protect them.

The stories are marked by quite shocking violence that twists and turns, looming and receding though time, and is centred on the young men. Macey, at Mow Cop, is a berserker with the Roman soldiers, who is capable of flipping and killing indiscriminately. Thomas is subject to fits and visions and is trapped with other villagers in the church tower at Barthomley by Civil War soldiers in a siege which becomes a historic massacre that occurred on Christmas Eve 1643.  Both of these young men are saved by the love of a strong young woman and both are troubled by visions that link them to the modern Tom. The violence resonates to the present with references to the Vietnam War which was going on when Garner was writing. The Roman soldiers have American nicknames and speak in army slang.

This is a multi layered and complex novel which makes few concessions to the reader. The movement between time frames is abrupt. Most of the modern story is delivered in jittery, jagged dialogue between Tom and his girlfriend. It is a novel of high compression. Only155 pages long, it requires the reader to do most of the work. The brevity is a stark contrast to most modern YA novels, especially fantasy, and what Garner manages to achieve, the amount he packs in to those few pages, is breath taking. In recollection, it seems a much longer novel, so much is contained within it and much of that actually goes on within the reader’s own head. The elliptical style, the sudden changes, the refusal to provide any easy explanations mark it as a true Young Adult novel defined, not by content, but by narrative sophistication. There is nothing easy about it but it is utterly compelling. Challenging in the true sense, it makes demands on the reader and demands to be read and read again.

‘It contrasts to the deadweight tedium of so much other ‘teenage’ fiction. The virtuosity with which he manages pace and dialogue is dazzling.’

So said The Times in 1973 and still true today.

I'm writing this review on the same weekend as Philip Pullman's much awaited The Book of Dust is being trailed and previewed and I'm wondering if Red Shift would even be published now, for Young Adults anyway, or would it be seen as too 'difficult', breaking just too many rules?
Posted by Celia Rees at 00:30