NOW ALL ROADS LEAD TO FRANCE by Matthew Hollis, reviewed by Celia Rees 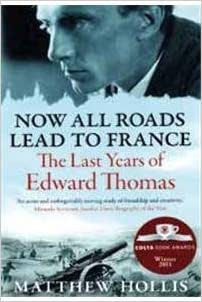 "Matthew Hollis’s superb biography took me back to read the poetry with new eyes and introduced me to Thomas’s wonderful prose writing on nature and the English landscape." 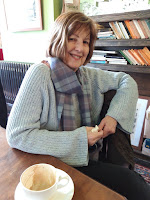 Celia Rees is a leading writer for Young Adults with an international reputation. Her titles include Witch Child (shortlisted for the Guardian Children's Fiction Prize), Sorceress, (shortlisted for the Whitbread - now Costa - Children's Book Award), Pirates!, Sovay and Glass Town Wars.  The chance discovery of an old family cookery book has now taken her writing in a new and different direction. In 2012, she began researching and writing her first novel for adults, Miss Graham's Cold War Cookbook, to be published by HarperCollins in July, 2020.
Twitter: @CeliaRees


I generally resist biographies of artists and writers. I don’t want details of their personal life to colour my view of their work. Edward Thomas is one of my favourite poets and, although I bought this book a while ago, it has been on my shelves unread. I’m very glad I put my prejudice aside. Matthew Hollis’s superb biography took me back to read the poetry with new eyes and introduced me to Thomas’s wonderful prose writing on nature and the English landscape. 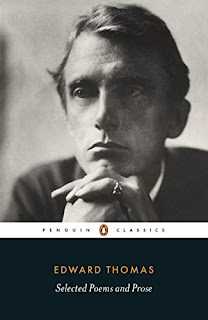 The biography covers the usual details: Edward Thomas was born in Lambeth and educated in Battersea, then St Paul’s before attending Lincoln College, Oxford. Then the story begins to unfold...

While still at Oxford, he married Helen Noble and soon had a family to support. He was determined to make his own way and to live by his pen. He reviewed for newspapers and periodicals, published essays, biographies and volumes on the countryside. As a reviewer, he was a familiar face among the Georgian poets and their younger rivals. He was a particular friend of the Welsh tramp poet, W.H. Davies and became great friends with a new comer to the London poetry circle: the American poet, Robert Frost. He was a respected, even feared poetry critic, famous for his blunt honesty, but he didn’t begin writing poetry himself until 1914.

He was a restless man, moving his family often, finding it difficult to find a place to settle and write. Even when a home was established, Thomas found it hard to stay there, leaving his wife Helen and the children for weeks at a time. He was subject to recurring bouts of black depression, which had started when he was at Oxford. He was a difficult man – proud, prickly and moody. His great solace was walking, alone, or in the company of Frost, roaming the countryside, covering many miles in a day.

Both men were interested in a new kind of poetry, using the vernacular, echoing the cadences of everyday speech and song. Very different from the self conscious flourishes of their contemporaries the Georgian poets, much closer to the unadorned honesty that would follow later with the First World War poets, like Wilfred Owen and Siegfried Sassoon. In 1914, with Robert Frost’s encouragement, Thomas began to write verse of his own, initially under the name Edward Eastaway. He was reluctant to publish under his own name, unsure of the reception he would receive.

All his poetry was written between November 1914 and his death in April 1915. It is an extraordinary body of work, containing some of the finest poems in the English language, but he had served a long apprenticeship as a critic, reviewer, essayist and inveterate observer and note taker of everything he saw and heard around him. He began to write poetry when he was ready to do so. ‘I’ll know my song well before I start singing” to quote a later poet, Bob Dylan.

As with all great poets he captures a moment, a feeling but strikes a resonance beyond the words on the page, going on and on, rather like the amplified bird song in one of his most famous poems Adlestrop.

'And for that minute a blackbird sang
Close by, and round him, mistier,
Farther and farther, all the birds
Of Oxfordshire and Gloucestershire. '

I came to Edward Thomas by way of Adlestrop in a Poetry Appreciation class on just such a June afternoon with the windows open and the blossom falling outside the classroom. My enduring love came later with As The Team’s Head-Brass. This is where I will leave the review. I’ll let the poem speak for itself, as poems always should. In a little under two years from writing this poem, Edward Thomas  was dead. Shot clean though the chest on a gun battery near Arras.

As the team’s head-brass flashed out on the turn
The lovers disappeared into the wood.
I sat among the boughs of the fallen elm
That strewed an angle of the fallow, and
Watched the plough narrowing a yellow square
Of charlock. Every time the horses turned
Instead of treading me down, the ploughman leaned
Upon the handles to say or ask a word,
About the weather, next about the war.
Scraping the share he faced towards the wood,
And screwed along the furrow till the brass flashed
Once more.

The blizzard felled the elm whose crest
I sat in, by a woodpecker’s round hole,
The ploughman said. “When will they take it away?”
“When the war’s over.” So the talk began—
One minute and an interval of ten,
A minute more and the same interval.
“Have you been out?” “No.” “And don’t want
to, perhaps?”
“If I could only come back again, I should.
I could spare an arm. I shouldn’t want to lose
A leg. If I should lose my head, why, so,
I should want nothing more. . . . Have many gone
From here?” “Yes.” “Many lost?” “Yes, a good few.
Only two teams work on the farm this year.
One of my mates is dead. The second day
In France they killed him. It was back in March,
The very night of the blizzard, too. Now if
He had stayed here we should have moved the tree.”
“And I should not have sat here. Everything
Would have been different. For it would have been
Another world.” “Ay, and a better, though
If we could see all all might seem good.” Then
The lovers came out of the wood again:
The horses started and for the last time
I watched the clods crumble and topple over
After the ploughshare and the stumbling team.

Now All Roads lead to France is published by Penguin.

See also: In Parenthesis by David Jones, reviewed by Graeme Fife
Posted by Celia Rees at 00:30