THIRD ANNIVERSARY POST No.2 by guest Diane Setterfield: THE HEART IS A LONELY HUNTER by Carson McCullers 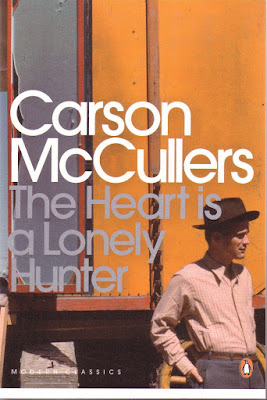 "There are many books that engross, enchant, delight, but in a lifetime of reading only very few books leave you with the feeling that your soul has been expanded."

Diane Setterfield is the best-selling author of The Thirteenth Tale and Bellman & Black. Her most recent novel is Once Upon a River (see our recent review here). She lives by the river in Oxford and reads a lot but never enough.

A few decades ago, heading for the station to begin a long train journey, I realised I had nothing to read. Panic!

‘Take this,’ a friend told me, pressing into my hands a book by an author whose name I did not recognise.

The thing is, my friend is a reader who enjoys nothing better than lengthy books by male, white American writers, the kind who are now mostly dead. We all have our blind spots, and I admit that The Great American Novel is not something I particularly relish. Still, Bristol to Edinburgh is a long way, doing the journey with nothing to read was unthinkable, and even a poor book is better than none.

On the train, I opened the cover of the battered paperback and within three lines the story had reached out and dragged me under.

I remember nothing of that journey, except raising my eyes once from the page in a state of ravished bedazzlement, and seeing fields slide by as I registered that something momentous was happening to me.

There are many books that engross, enchant, delight, but in a lifetime of reading only very few leave you with the feeling that your soul has been expanded. At the end of the book I acknowledged that I might have been wrong about dead, white male American writers. Sometimes, I had to admit, such a person might be so gifted with the power of close observation, might hone a talent for writing for so many decades, that in the prime of life, at the pinnacle of their skill, they would be capable of such boundless wisdom, such mastery of construction.

The book was The Heart is a Lonely Hunter, its author Carson McCullers. You are no doubt better informed than I was, and you probably know what took me so much by surprise when I later discovered it. Carson McCullers’ full name was Lula Carson McCullers. And not only was she a woman, she was just nineteen, barely out of girlhood, when she started writing this astonishing book. By 1940, when it was published, she was just 23 – and America’s new literary phenomenon.

Instead I could try and tempt you with themes. It’s about the conflict between individual desire and connection with the wider world, I might tell you. Or: it’s about loneliness. But abstract nouns rarely make me want to read a book, and you might be the same.

I could tell you that Carson McCullers uses plain words and simple sentence structures that propel you fast into the book, and that with them she achieves effects more powerful and subtle than any amount of ‘beautiful style’. If it’s writing itself that rocks your boat, it might do the trick. But maybe only geeks like me get excited about this stuff.

In the end, for me, it comes down to one thing. I could almost call him a structural device, an engine, or an idea, though he is in fact a character: the deaf mute at the heart of the book, who connects each character to the others, and is the silent receptacle for all their intense wishes and wild dreams love this book for a thousand reasons. If I could give you only one reason to read this book, it would be this: Read it for Singer. His unspeaking mystery raises the book to a level of genius beyond anything else I have ever read – or could hope to write – and it is he who draws me back, decade after decade, to watch him again and feel myself alter.

The Heart is a Lonely Hunter is published by Penguin in the Modern Classics series.