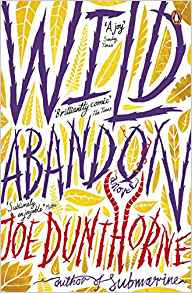 Anne Fine writes for adults and children. She has twice won both the Carnegie Medal and the Whitbread Children’s Book Award, as well as the Guardian Children’s Fiction Prize, two Smarties Prizes and other regional and foreign awards.

She was twice voted Children’s Author of the Year and was Children’s Laureate from 2001-3, when she set up My Home Library, a website that still offers freshly designed and freely downloadable modern bookplates to encourage young readers to form their own home libraries from the second hand books around them. She's published three anthologies of poetry for different ages called A Shame to Miss 1, 2 & 3. She is a Fellow of the Royal Society of Literature and has been awarded an OBE and her work is translated into over forty languages. Anne has two daughters and lives in County Durham.

I came to Wild Abandon, by Joe Dunthorne, partly by accident. I'd been reading a heap of those wonderful women writers whose work had been either so neglected or so unpuffed that I'd only recently caught up with some of them. (You know: Dorothy Whipple, Jennifer Johnston, Elizabeth Harrower, Rosamund Lehman, Emily Eden, Mollie Panter-Downes, Madeleine St John, etc etc etc).

And suddenly I thought, if I don't read something male and modern, I'll go mad. The first to be recommended to me by my ace metropolitan reader was London and the South-East, by David Szalay, and that was so much fun, and so insightful and funny about the life of an ad salesman, that I'm not surprised it won the Betty Trask Prize. Metropolitan Reader's next suggestion was Wild Abandon, which I have enjoyed so much I've chosen it for book group (who have also been busy over the last months catching up with some not quite so neglected or unpuffed women writers like Elizabeth Taylor, Jane Gardam and Vita Sackville-West etc etc etc).

Do 'em all good, I thought.

It will, too. Dunthorne tells the story of a ghastly sounding but well-meaning commune in wettest Wales. (This book will put anyone off the idea of roughing it in the countryside for ever.) Young Kate and Albert have grown up there, and, frankly, Kate is now growing out of the whole boiling, while Albert grieves (in an entirely mad but somehow credible way) because he senses his beloved sister will soon be off. (It's no accident that he's currently obsessed with The End of the World.) The marriage of their parents, the essentially kind and sympathetic - but no longer suited - Don and Freya, is steadily falling apart, the number of communards is dwindling, and a life's work and commitment is on the brink.

Everyone in the novel is strange or dopey/doped or downright weird, but every last one is believable. Dunthorne shows clearly both their outer faces and their vulnerable inner lives. He also copes brilliantly with his varied cast and impressively unravelling tale. The book is fast-paced, and entirely emotionally convincing with a genuine warmth and understanding shining through the comedy.

Wild Abandon is published by Penguin.
Posted by Linda Newbery at 00:00