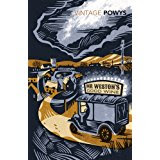 "A book I have come back to again and again over the years, partly because it’s so funny, but mostly because I’m bedazzled and bewildered by it."

Sally Prue is a writer for children of all ages, from picture books up to Young Adult fiction. Her novel Cold Tom won the Branford Boase Prize and the Smarties Silver Award, and Song Hunter won the Historical Society’s Young Quills Award. Her other jobs have included being a Time and Motion clerk, an accompanist, and a piano and recorder teacher. Sally is married, has two grown up daughters, and lives on the edge of a small but very beautiful wood in Hertfordshire, England. She  blogs at The Word Den. She is also to be found at http://www.sallyprue.co.uk/ and @sally_prue.

Writers are encouraged by their publishers to sum up each new book in a single sentence. This is partly to provide a strap line to put on the press release and cover (it’s more or less the equivalent of telling the prospective buyer whether the tin contains treacle sponge or axle grease) but it also happens to be good discipline for the writer: it’s generally useful if he or she has managed to work out what the book’s about before it goes to press.
How might T.F. Powys’s have summed up his novel Mr Weston’s Good Wine?
Well, the nearest I can get is Cold Comfort Farm meets The Revelation of St John.
The set-up of the book is simple. Through the 1920s November mists Mr Weston, a travelling salesman, arrives among the inhabitants of the village of Folly Down. These villagers include an atheist vicar; his neglected daughter (‘If a girl is not taught hockey,’ says a well-meaning neighbour, ‘she might be found in a wood, talking to a serpent’); a wicked procurer of maidens for the amusement of the farmer’s unthinking sons; a love-lorn mystic; and the family of an innkeeper.
Now, as it becomes clear very soon, Mr Weston is God the Father in disguise, and his sales assistant is the Archangel Michael. More disconcerting still is the fact that Mr Weston keeps a lion in his delivery van (a sign, as St Peter tells us, that we must be sober and vigilant because the devil, as a roaring lion, goes about seeking whom he may devour).
But how can anyone bear – or dare – to be sober when Mr Weston has brought his good wine to Folly Down? There is truth in wine, and Mr Weston’s good wine is as sweet as love and as strong as death; and the truth of death as well as of every kind of love (there’s lots of amorous tumbling in the village’s oak tree bed) are revealed during a timeless November evening full of tenderness and horror.
Mr Weston may be white-haired and kindly, but he is also the terrible god of Isaiah: ‘I form the light, and create darkness,’ he says. ‘I make peace, and create evil: I, the Lord, do all these things.’
Mr Weston’s Good Wine is a book I have come back to again and again over the years, partly because it’s so funny, but mostly because I’m bedazzled and bewildered by it. It’s haunting, tragic, horrifying, joyful, silly and wise, all in the space of 232 pages, and its inhabitants are by turn lusty, bewildered, and cruel. I could say more, but am abashed by Mr Weston himself, who doesn’t argue when someone suggests changing the last verse of Psalm 104 to ‘let the critics be consumed out of the earth’.
Mr Weston’s Good Wine is a hugely rewarding read. It gives us Tamar, who believes she’ll soon meet her longed-for blue-trousered angel; the bereaved Rev’d Grobe, who is fascinated by Coleridge’s poem Christobel and tenderly preaches a gospel in which he no longer believes (Mr Weston, by the way, prefers Cowper); Mr Grunter, who discovers there are worse things than being nobody; Luke Bird, who needs a miracle to attain his bride; the truly terrible Mrs Vosper; and poor Ada Kiddle, who…but I mustn’t give too much away.
So I’ll finish where everyone begins, with the title, Mr Weston’s Good Wine. The title is an echo of Jane Austen’s Mr Weston, of course, and as soon as I’d finished Powys’s strange story for the first time I re-read Emma to find the whole quotation.
It comes as Emma rides home in a carriage, alone except for the amorous Mr Elton, who ‘had been drinking too much of Mr Weston’s good wine, and [Emma] felt sure he would want to be talking nonsense’.
So: is Powys saying that Emma’s Mr Weston is god-like in some way? I wouldn’t have said so, but now I come to think about it…
Or does Powys only mean that Mr Weston’s Good Wine, the book, is nonsense (though Ronald Bythe called Powys the least-modern of writers, and what’s more modern than nonsense?)?
Or is Powys’s title just one more go at putting off the critics?
I’ll have to read both books again, one day, to see if I can work it out.