Guest feature: Q&A with Cynthia Jefferies on THE HONOURABLE LIFE OF THOMAS CHAYNE 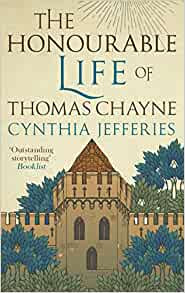 'One of a novelist’s jobs is to reflect society and provoke thought. I hope I can do that, while also striving to entertain.'

The Outrageous Fortune of Abel Morgan, Cynthia Jefferies' first novel for adults, was published in 2018 and is reviewed here. Her follow-up, The Honourable Life of Thomas Chayne, is linked, developing a minor character from the first book. It has recently been published in hardback.

Writers Review: This novel is linked to your first, The Outrageous Fortune of Abel Morgan, though it pre-dates it. Was the idea for this story already taking shape in your mind as you finished the earlier one?

Cynthia Jefferies: I knew I would have liked to find out more about Ptolemy when I put him in the first book, because he only had a small role. Any more might have unbalanced the novel but he intrigued me. I had mentioned in The Outrageous Fortune  that he had never been able to settle after his experiences during the English Civil War. Why? What had it been like to live through that violent time? When it came to choosing a theme for the second book he was an obvious candidate, though I have Celia Rees to thank for the suggestion to base the second novel on a minor character.

WR:  Many writers find it difficult to strike the balance between authentic historical background and the demands of fiction. You evidently drew on many sources for information of the period - were there times when you felt overwhelmed by your research, or on the other hand did you find that it boosted your confidence?

CJ: It certainly boosted my confidence to have an idea of the realities of the period. On the other hand I was writing fiction, and that means leaving a lot out. I love the research, but believe strongly that too much detail can quickly make a good story collapse under the weight of facts. That’s not to say that I wanted to write an alternative history. I have been as accurate as I could, while not dwelling too much on the minutia. Likewise with the language. Little things like an enemy being pistoled instead of shot give a feeling of being in the period while not forcing the reader to wade through too much that is unfamiliar. Readers might learn things reading my fiction. I hope they do, but it’s not my job to educate. My job is to entertain, and also to offer something to think about.

WR: Was it always your intention to depict a son loyal to the King while the father sides with the Parliamentarians - did you ever consider having it the other way round?

CJ: I did think about it being the other way around but my interest in the storming of Cirencester led me to write it the way I did. Cirencester was an economically depressed wool town with plenty of reason to support parliament, although many surrounding landowners supported the king. I wanted to put Ptolemy in the position of having to attack a town and inhabitants he knew well. I wanted him, and the reader to be confronted with that terrible situation, so common in civil wars. However, I didn’t set out to make his father change sides. That came about through reading about the period and the way his father’s character developed.

WR: You've drawn extensively on the Civil War history of Gloucestershire, where you live. In your research, did you come across any chance finds or locations that became important in the story? And did you visit all the settings, e.g. Flint Castle?

CJ: I have some very useful street maps, and a facsimile of a map of the UK in the 17th Century. I find maps essential! In fact Flint Castle was a gem of a find when I was searching for somewhere in the north for Ptolemy and Richard to go. I drove up there with my eldest son and we spent a very rainy few days, looking at the ruins of Flint and other places mentioned nearby. The river doesn’t come to the walls any more, but you can see quite clearly how it did. I also stayed in Bristol overnight and spent two days walking about the streets. Being a flaneur (is there a feminine for that word?) is vital for me when researching a novel, so yes, I have visited everywhere. Living on the west coast of Scotland for a few years informed those locations. I have been to Oxford many times, and Norfolk too.

WR:  "When war comes in, morality becomes a poor relation." Why did you choose the title The Honourable Life ...  and do you want readers to question that during the course of the novel?

CJ: Actually the word 'honourable' was suggested by the publisher to complement 'outrageous' in the title of the first novel. I do though want readers to think about honour and morality within the story. Aphra makes Ptolemy think a little about slavery and women, but his is a 17th Century morality and he can’t see through our eyes. In addition, he does not have a naturally rebellious nature. He does like to think he is very honourable but he can also be naive.

WR: You seem to feel quite at home with 17th Century weaponry, battle strategies, domestic life, medicine and seafaring. Was any of this particularly daunting to write about?

CJ: Well I hope I did a reasonable job. It wasn’t usually daunting but occasionally I wanted to know something very specific and it could be tricky finding the information. Facts about doors on board ships of the time for instance. In the end I fudged that one, having found a sliding door on an earlier vessel, which gave me enough to work with. Fortunately, with fiction it’s usually possible to swerve around something one isn’t sure about, although I far prefer to know the truth.

WR:  The novel covers a vast span of time - from Thomas's birth to his fifties. How did you avoid any sense of hustling the reader forward?

CJ: Perhaps because I was so enjoying making the journey with him! I really don’t know, but am very glad you think it didn’t feel rushed. Writing in the first person has immediacy. It feels to me like having a conversation with the character. During a normal conversation we tend to leave out great swathes of ordinary life in order to describe the more interesting bits. I think what Ptolemy did while telling his story was to refer to the boring bits obliquely. For instance, his years in Bristol, building his career are mentioned a little in his letters to Aphra and as a backdrop to his visits home, but little is revealed of the day to day work, or of any specific friends he made. The years drift by, as they do in real life.

WR: So far you've chosen male perspectives as your viewpoint character. Did it just happen like this, or was it a deliberate choice?

CJ: I’ve been asked this many times and I’m still not sure of the answer! I think it’s too simplistic to say that men get all the best stories, and women are largely written out of history. Of course that is true, but I have no problem imagining strong female characters, or persuasive plots for them. For some reason I don’t understand, boys and men have always been my go-to main characters of choice, in spite of needing to write girls in much of my modern fiction for children. I know that I naturally write more comfortably as a man, although I’ve never been one! Sometimes I wonder if there’s something linking the male side of my brain with creating stories? Is that even possible? I have no idea. All I know is that whenever I start a story, I write a male character and have to deliberately bring in women as the plot develops. Whether my male characters are believable or not is a question I can’t answer!

WR:  What next - will you stay in the 17th Century, or are there other periods you're keen to explore?

CJ: To some extent that depends on what a publisher wants. There is more I want to say about the 17th Century, and oddly, considering my last answer, I have a woman’s story firmly in my head!

Apart from the 17th Century, which I find so interesting because it seems to be balanced on the cusp between medieval and modern history, I have also always been fascinated by ancient history. The Bronze Age Trojan war found Stone Age sling shot warriors acting as mercenaries. What did they think when they left their island and arrived at Troy with all the metal weapons there?

How new technology informs a community is so interesting. Man’s ingenuity has always been impressive. It’s one of the things that gives me any hope about our climate emergency. We have been lazy for many generations, plundering the wealth of our world because it was easy. Now we are having to think again. I look at the sudden explosion of manufactured vegan food on offer, the race towards cleanly produced electricity for transport because the demand is there. Inventors are excited about the need to be different. Meanwhile we can be taught and encouraged to be frugal, and to find pleasure in it. One of a novelist’s jobs is to reflect society and provoke thought. I hope I can do that, while also striving to entertain.

Thank you, Cynthia Jefferies, for answering our questions.

The Honourable Life of Thomas Chayne is published in hardback by Allison & Busby.

The Outrageous Fortune of Abel Moran is reviewed here. 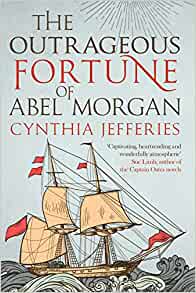