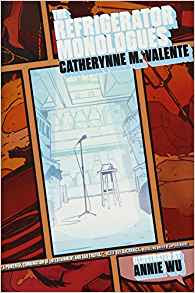 "As a high concept novel with an idea that sold me instantly, it completely delivers." 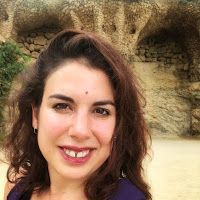 Rhiannon Lassiter is an author of science fiction, fantasy, contemporary, magical realism and psychodrama novels for juniors, middle grade and young adults. Her first novel, Hex, was accepted for publication when she was nineteen years old.

Rhiannon’s favourite authors include Ursula LeGuin, Margaret Mahy and Octavia Butler. Her own novels explore themes of identity, change and transition. Her ambition is to be the first writer-in-residence on the Moon.

I like high concept fiction. A lot of my time is spent searching for the Big Idea that has enough in it to sustain me for an entire novel. That’s true of me as a writer and as a reader. So I was immediately drawn to Catherynne M. Valente’s The Refrigerator Monologues, a title that clearly references a concept crossover that is so brilliant it’s incredible it hasn’t been done before.

The Vagina Monologues was an episodic play written by Eve Ensler in 1996, twenty year ago. It was groundbreaking work focusing on women, sexuality and violence. 'Fridging' is a concept with an even longer history but the term was popularised in 1999 by Gail Simone though her website Women In Refrigerators, which compiled a list of female characters in comic books who were killed off as a plot device.
Valente herself is an award-winning author, a recipient of the Tiptree award for The Orphan's Tales: In the Night Garden and the Locus Award for Best Young Adult Book for The Girl Who Circumnavigated Fairyland in a Ship of Her Own Making. She’s been on my list of authors to explore for some time but this was the first book of hers I’ve read.
It took me some time to get hold of a copy because it was published in the US first and there is no electronic edition, perhaps because the paperback format makes significant use of illustrations by comic book artist Annie Wu.
As a high concept novel with an idea that sold me instantly, it completely delivers. It launches the reader into an invented superhero universe, one with its own original superheroes, super villains and everyone in between. Page Embry, the narrator of the first section is dead “the deadest girl in Deadtown” who lives – or rather doesn’t – in a pocket dimension, a suburban hell, with all the conveniences of modern unlife. She is the President of the Hell Hath Club, a coffee-klatsch of women scorned. During the course of the book, these six women tell their stories, with intermissions for Page to introduce them and enjoy some soul music at the Lethe Café.
The writing is snappy and savage. These women had lives, hopes and dreams, before their stories came abruptly to an end when a villain put a full stop to them. The men they loved were superheroes, and these women’s deaths have served to motivate their next big plot action or their need for revenge. But the women themselves have been forgotten, or were never considered that important, bit part players in a bigger story.
It must have been a huge piece of work to - as Valente mentions in the acknowledgements - “(create) an entire superhero universe to make a point” and yet it’s done with considerable wit and elegance. The reader’s knowledge of this invented universe is largely assumed by the narrators, and it is at once original and recognisable. Characters like Grimdark, a Batmanesque figure, Proessor Yes who is Headmistress of St Ovidius’s School for Wayward Children, or The Arachnochancellor are completely believable creations. The world they inhabit is a superhero universe that hangs together or doesn’t with the right combination of techno babble and magical effects.
The individual chapters work well as monologues, neatly encapsulating the stories of these women: tragically comedic, well paced, mixing foreshadowing and self- reflection. I did wonder if the individual voices were sufficiently differentiated. If you pick up the book at a random page can you tell if it’s wayward child Julia Ash or conceptual artist Daisy Green speaking? And unfortunately, I mostly couldn’t. I think it’s a weakness in the book, although it may be that Valente was going for this precise effect: six women, speaking with one voice. But it’s not a very diverse cast; self-described as “mostly very beautiful and very well read and very angry” but also predominantly white and middle class. I think Valente could have gone further here to give us a richer palette of voices.
The chapter I think is most different is the one from the point of view of wise-cracking Pauline “Polly” Ketch, a villainous sidekick with more than one Bad Daddy. Her section stands out for her sparky villainy although she’s probably the most deluded of the characters, the one who believes her lover and murderer will return for her and bring her back to life. Spoiler, he doesn’t.
That brings me to my other criticism of the book, which again is feature of the authorial intention. There is no redemption arc for these women. They have been variously dead-ended or flatlined, destined to spend eternity in clothes picked out by relatives for them to wear in their coffins. Their monologues and their conversations all concern a world which they won’t be returning to. And although they have created a small semblance of a live for themselves with drinks and music and friendship, their stories have nowhere to go, their monologues end where they began, in Deadtown.
It has to be this way because that’s the big idea of the book. Women in superhero stories are typically foils to men, used and abused to further a male plot of action and violence. We are told from the beginning that Page can’t change. But it makes for a depressing read, despite the wit and sparkle. You want the women to rise up and start again, to see them re-enter the fascinating universe Valente has created. But they can’t and don’t and the book would be weaker if they could. It’s frustrating.
I’m glad to have read this book and I will look for more from Valente who I sense is an author coming into her own superpowers.  I recommend it highly. But I’m not sure how much it would stand the test of a re-read. It does what it says on the tin and it does it well and with flair. If I was left wanting a little bit more, perhaps that’s a sign that I need to read more of her work.
Posted by Linda Newbery at 00:00