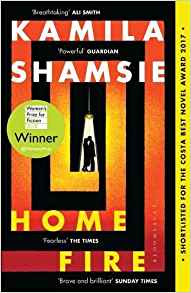 "A big brave novel where every character has depth and complexity." 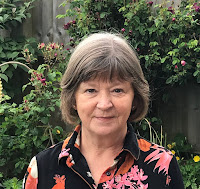 Her new dystopia Body Tourists will be published in November this year.  For more information, see Jane's website.

In terms of ambition, this is the bravest book I’ve read for a long time. It takes on political and religious extremism and anti-terrorism on the world stage, and deals with the subject confidently and convincingly.

And it does that with great humanity, by exploring the issue through the points of view of five characters who play opposing roles in this drama.

The plot is based on the Greek drama Antigone. Antigone, you may remember, loved her brother, who was killed while fighting. When King Creon said her brother’s body would be denied funeral rites, and must lie unburied outside the city walls, Antigone crept out and buried him. Her punishment was death.

Shamsie has updated the story and created a powerful thriller which deals with British state attitudes to Muslims, and the terrorist group ISIS. The novel is about three British Pakistani siblings whose father abandoned the family in order to fight in Afghanistan, Chechnya and Syria, and whose mother died when they were young. Effectively, they are orphans. The older sister, Isma, has looked after the twins Aneeka and Parvaiz, and all three are committed Muslims. When the novel opens, Parvaiz has just joined ISIS and gone to Syria. His two sisters are heartbroken that Parvaiz is following in their father’s footsteps, but their reactions are very different. Isma denounces him to the British police, in order to protect her own and Aneeka’s fragile position as daughters of a Muslim father who died en route to imprisonment at Guantanamo. Aneeka, who is completely devoted to her twin, hopes against hope that he will realise he’s made a mistake, and come home. When she finds out that Isma has informed on him, she breaks contact with her sister, raging at her,

"You’ve made our brother not able to come home!"

Then Aneeka meets Eamonn Lone, son of the first Muslim Home Secretary, Karamat Lone. She decides to seduce him and try to get him to use his influence with his father to allow Parvaiz to return to London.

“I wanted Eamonn to want to do anything for me before I asked him to do something for my brother. Why shouldn’t I admit it? What would you stop at to help the people you love most?”

The seduction works only too well – Aneeka and Eamonn really do fall in love. Parvaiz, meanwhile, is having second thoughts in Syria, where he is working for the media arm of ISIS, recording beheadings. He escapes and contacts Aneeka for help. Eamonn goes to his father the Home Secretary to ask him to permit Parvaiz to return to London. However, Karamat Lone, who is himself a Pakistani-born Muslim, is making a name for himself by being hard on terrorists. Never will he allow Parvaiz home.

The book spins swiftly to its climax: Parvaiz is shot by the ISIS member who recruited him; the Home Secretary announces that the boy’s body cannot be repatriated, and must be buried in Pakistan; Aneeka flies to Karachi for the funeral, and persuades the undertakers to deliver the corpse to a park next to the British embassy. There, beneath a Banyan tree, she scatters rose petals and keeps a grief-stricken vigil over her brother’s body, watched by the TV cameras of all the world. Local firms, moved by her passion and her commitment, bring blocks of ice to refrigerate the body. The public, who initially condemned the terrorist boy and his immoral sister, witness her courage and her sorrow, and a wave of sympathy builds. Natural justice suggests that the body should be decently buried at home in London.

The tragic denouement which ends Aneeka’s life will also topple Karamat Lone. Her victory comes at the cost of her own life (like Antigone’s) but it is, nevertheless, a victory, because she has gained the moral high ground, and the sympathy of both the reader and the public.

There’s a final twist which I won’t give away, because I’ve already given away enough! But I’d like to add a little more on the subject of the book’s humanity. Shamsie evokes empathy for each of her characters. Structurally, it is brilliantly conceived. Isma, the older sister, has the first two chapters; Eamonn Lone has chapters 3 and 4; Parvaiz has chapters 5 and 6; Aneeka has a single chapter, chapter 7; and the final two chapters go to Karamat Lone, Home Secretary and father of Eamonn. So as the novel unfolds the reader learns more of each player’s motives and feelings, and the complexities deepen. There are no villains, life is not that simple. In fact the character the reader feels most immediate sympathy for is Parvaiz.

You might ask how anyone can sympathise with a member of ISIS whose day job is filming people being beheaded. But the answer is, easily enough, when you know the boy’s backstory: his sense of loss and deprivation at his father’s absence, and his guilt at leading a trivial and comfortable existence in London when brave Muslims are putting their lives at risk every day in Syria. He is particularly isolated when Isma his mother-figure moves to the USA, and Aneeka his beloved twin becomes increasingly involved in her own adult life, via the Law degree she is studying for. Parvaiz remains stuck working in a grocery store and obsessively recording street sounds.

"Traitor!" he calls Aneeka, for leaving him behind. He’s mugged in a car park by boys he was at school with, and they take his phone. At this low point Farooq appears; and Farooq is a recruitment agent for ISIS. The reader quickly works out that Farooq was behind the theft of the phone. He returns it to Parvaiz, with apologies, telling him that the stupid thieves didn’t know Parvaiz was the son of a great warrior. Parvaiz is hooked. Farooq claims to have known and fought alongside his father, and plies the lonely boy with stories of his heroism:

"Here was Abu Parvaiz, the first to cross a bridge over a ravine after an earthquake, despite continuing aftershocks, to deliver supplies to those stranded on the other side; here was Abu Parvaiz using the butt of his Kalashnikov as a weapon when the bullets ran out; here was Abu Parvaiz dipping his head into a mountain stream to perform his ablutions and coming up with a beard of icicles, which led to dancing on the riverbank …"

Parvaiz becomes more and more dependent on the flattering friendship of this snake he comes to regard as a surrogate father. Once Parvaiz has been tricked and cajoled into flying to Syria, the kindness ends, and the boy is made to understand that torture and death will follow any disloyalty on his part. He is a captive of ISIS and must pretend fervent agreement with all that his elders say and do, or face brutal punishment. And as a named terrorist, he is banned from re-entering Britain. At 20, his life is over.

This is a big brave novel where every character has depth and complexity. It deservedly won the Women’s Prize for fiction last year. Shamsie is a British/Pakistani writer and this is her seventh novel. To get a sense of Shamsie herself, take a look at her ‘provocation’ in the Guardian in favour of only publishing fiction by women for one whole year!


Home Fire is published by Bloomsbury.
Posted by Linda Newbery at 00:00