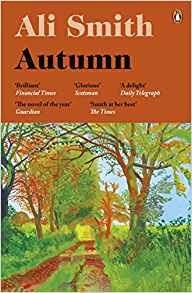 "Funny, sad, affectionate and warm-hearted – a genuine joy to read."

Marianne Kavanagh is an author and journalist. Her third novel Should You Ask Me, and her latest novel Disturbance, are both published by Hodder & Stoughton. More details on her website.

I’ve been aware of Ali Smith for a while. I know she was shortlisted for the Booker in 2014 with How to Be Both, a book in two halves (and printed with either half first, because the order doesn’t matter). But I hadn’t read this, or any of her short stories, or any of her other well-known novels like The Accidental. I started reading Autumn, the first of her quartet of novels about the seasons, quite by chance. And now I’m hooked, I’m hooked, and have no choice but to go back and read everything she’s ever written.

As readers, we’re all very different. We read some books and think, ‘Meh.’ We read others and think, ‘Competent, yes, but where’s its heart?’ And then we get talking to our friends and discover they loved the ones we hated and wept over the ones that left us cold. So Autumn may not be the novel for you. But it’s very rare for me to find a book that overwhelms me quite like this, that leaves me spellbound and happy, the world changed, the future full of hope. Ali Smith passes on her love of language – imagery, wordplay, puns. Her sentences – Penelope Fitzgerald does this for me, too – make you look up and think, re-read, look up again. But there’s a plot pushing the novel forwards, too, and delicious passages that make you laugh (everything to do with rules and regulations), and characters you care about, and a whole back story about the Profumo affair, and women and Pop Art in the 1960s. It’s all set against a background of barbed wire and division, and the kind of rigid, angry place Britain has recently become, which somehow makes the novel both ordinary and extraordinary at the same time. Smith published Autumn in 2016 just after the referendum, and this is the backdrop to everything. As Elisabeth Demand (one of the central characters) says: ‘It’s like democracy is a bottle someone can threaten to smash and do a bit of damage with. It has become a time of people saying stuff to each other and none of it actually ever becoming dialogue.’

Dialogue, though, is central to the book. Daniel meets Elisabeth when she’s eight years old (there are 70 years between them). Right from the beginning, he teaches her to question her assumptions with a liveliness and logic that shape her thinking for the rest of her life. I love their discussions, particularly the one about the morality of lying (‘The power of the lie, Daniel said. Always seductive to the powerless’) and the whole sequence about making up stories, which has Daniel – to Elisabeth’s fury – suggesting that Goldilocks might have been a vandal who spray painted her name on the walls of the bears’ house (‘That’s not in the story,’ Elisabeth says. Daniel replies, ‘Who says?’). Maybe it’s because I’m reading Autumn in September 2019 with Trump being impeached and Johnson found guilty by the Supreme Court, but when Daniel says, ‘Whoever makes up the story makes up the world’ I find myself wincing.

I don’t know a lot about visual art. I always feel lost in galleries. But Smith makes Daniel’s passion for painting, which he passes on to Elisabeth, so vivid that I feel I can understand the power of colour and collage. There’s a passage describing a painter at work (‘it was really terribly alone’) that makes me think about the madness of writing novels – the kind of horrible, exhausting struggle that George Orwell described.

Also, Elisabeth Demand would be proud of me. I took Autumn on a week’s holiday to a blustery Greek island. Once I’d started, I couldn’t stop. One afternoon, we went down to the hotel pool which, because of the weather, was completely deserted. I asked the manager if she could turn off the loud dance music echoing round the concrete slabs and palm trees so that I could read my book in peace. ‘But it’s a public area,’ she said. I looked round at the empty sun loungers, the closed umbrellas, the wind rippling the surface of the water. I looked back at the manager. ‘But I am the public,’ I said.

This is what happens with books like this. They teach revolution.

Autumn is published by Penguin.