Guest review by Katy Evans-Bush: HOMESICK - WHY I LIVE IN A SHED by Catriona Davies 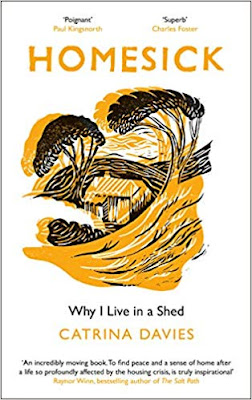 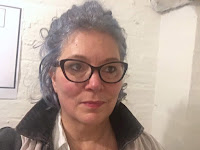 Katy Evans-Bush is a poet (Salt Publishing), an essayist (Penned in the Margins) and a freelance writer and editor. Her blog, Baroque in Hackney, was shortlisted for the Orwell Prize in 2012. She is now living in Faversham, Kent, and her memoir of losing her flat, A Far Cry from Hackney, is forthcoming from CB Editions.


When I sat down to start writing my book about losing my flat and spending almost a year homeless, I knew that homelessness — maybe even especially hidden homelessness — is on the rise, but I hadn’t heard of a single book about it. The charities were silent on the subject; ‘hidden’ anything is a bit hard to count. The only two useful headlines in a Google search on ‘middle class homelessness’ were one telling me I would be very unlikely ever to become homeless, and a column in The New Statesman, by Nicholas Lezard, that was actually about me.

In July I discovered a new book, called Homesick: Why I Live in a Shed, by Catrina Davies — and let’s make no bones about it, this is an intensely political book. Catrina Davies was living in a shared house in Bristol, in a box room looking onto a brick wall. ‘Rent was a monthly trauma’. She was so consumed with the anxiety of money and ‘staying eradicated’ for monthly inspections (as she was off the lease) that she couldn’t work on the book she was trying to write.

She begins at the moment it all boils over: hunched on her bed, as her rowing housemates smash plates in the kitchen, she escapes into a tour of her old neighbourhood in Cornwall on Google Earth. She gets to the corrugated shack that used to house her father’s business — and in the days that follow, almost without meaning to, she makes a decision.

Homesick tells how Davies went to live in the shed. Instead of Virgil, she has Henry David Thoreau as a guide. She describes in minute detail the condition of the shed, the dynamic with neighbours, the reactions of her family and others, and how she eventually went legal (she still lives in the shed). Just as importantly, she contextualises how she came to fall foul of the housing crisis, which starts in her childhood. She talks about her mother’s travails as a private renter. (Private renting last year surpassed relationship breakdown as the number one cause of homelessness in London.) She is very clear about how, as a poor renter, you are effectively supporting a landlord.

She describes the local economy of Land’s End in detail, from the big summer houses lying vacant all year to the low-paid part-time work available to service them. Her sister and a few other people pay their mortgages by moving out of their homes in the summer — to sleep in fields, or vans — and renting them out to holiday people.

The first chapter starts with an epigraph from Walden: ‘the cost of a thing is the amount of what I will call life that is required to be exchanged for it, either immediately or in the long run’.

Davies’ memoir is also an attempt to glean meaning from her experience and its context. Her other guide is an old two-edition Oxford English Dictionary, the condensed one with the magnifying glass. She likes facts, and she looks things up.

‘I pulled out my phone and Googled the average wage for someone working full-time in Cornwall. My phone came back with £17,264. Half the houses in the window were on sale for more than half a million pounds. I ignored the houses in the window and Googled the average price of a house in Cornwall. My phone came back with £206,323. I typed in a little over the average wage — £18,000 — and estimated my outgoings at roughly £200 a month. the Halifax mortgage calculator said I would be allowed to borrow £51,000.’

It’s not just London. She is clear and insistent that what we need to do, to regain any sort of sustainable society, is recalibrate how we think about places. There is a field that gets sold in the course of the book. There is trauma, there’s making sense of her childhood, and there’s learning to go forward, but she can only do that last because of one thing. Her father actually owns the shed.

We need to recalibrate how we think about who we are: there are old friends whose paths have diverged irremediably from hers, and her different position in the place where she grew up is one of the most searching aspects of the book: ’I thought about my friend, how we had started off equal, then grown less and less equal over the years… Her story was intact. The structures her childhood had built were still standing…’

When I was homeless, one of my biggest anxieties was that I felt like a fraud: I looked fine, I had the same clothes on, I was still even working (some). Davies addresses this exact point in a characteristic way, writing: ‘I knew I was one of the luckiest people on the planet ... I wasn’t waking up on the side of the street in a cardboard box … Not yet, anyway ... I was safe and warm and educated. I had no right to feel miserable.’ But she did have a right to feel crippled by the anxiety and precarity of it all.

Homesick - Why I Live in a Shed is published by Riverrun.
Posted by Linda Newbery at 00:00