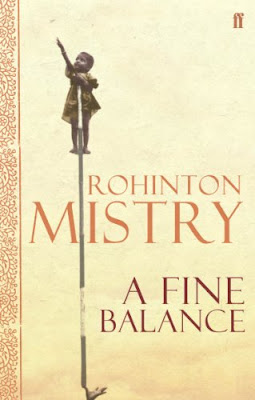 Her debut novel, The Long Weekend, published by Andersen Press, is a tense thriller about two boys who are abducted after school. Her new book, The Girl in the Broken Mirror was published in May by Troika Books. ‘This is an unflinching, multi-layered exposition of male privilege, male abuses of women, and the clash of cultures. With hard-hitting clarity it also shows how girls are silenced, made to feel ashamed of their bodies, ashamed of wrongs done to them. Ultimately this is a poignant personal story of a girl’s fight to rebuild and re-connect with herself and those who love her after a truly harrowing experience.’ Love Reading 4 Kids

Some stories stay with you forever; they leave an indelible mark on you, leave you wanting for more, for the story to never end, for the writer to never stop writing. A Fine Balance by Rohinton Mistry is such a book for me.

It was also the work that had the most profound effect on me and my understanding of the country of my birth, its customs, traditions and people.

Mistry did not start writing until after he had left India with a degree in Maths and Economics from the University of Mumbai. He emigrated to Canada to work in a bank. It was some years later that he decided to pursue a degree in English and Philosophy, and it was then that he started writing stories. He won the Hart House literary short story prize two years consecutively. Tales of Firozsha Baag was a collection of short stories set in an apartment block in modern day Mumbai. Then came Such a Long Journey, which was shortlisted for the Booker prize, and won many others. Later, after it was adopted as a University text in Mistry's old university, it was to come under attack by extremists and was withdrawn despite a huge outcry.

A Fine Balance is the book of his that I truly love. It stands the test of time. As a portrayal of life in Bombay in India during the 1970s, it is, for me, without comparison. I've lent out my hardback copy to friends, who, with the exception of one person, have absolutely loved it. The one exception's pronouncement on it was: 'Good melodrama' - which was tantamount to blasphemy in my eyes.

The sad fact of the matter is that the everyday lives of the characters may well have seemed like melodrama to him, as though the author had simply sensationalized the harshness of his characters' lives for the sole purpose of giving the reader something more than a portrayal of the humdrum nature of abject poverty. For all the harsh realism contained within its pages, and there is much, the novel is one of carefully, almost poetically, crafted prose, which forms a story that is memorable and harrowing. It is far removed from the magical realism of Salman Rushdie's work, also originally from Mumbai, yet there is something magical in each page of this book, and even the most minor character you stumble upon within its pages is treated to the magic of his penmanship.

A Fine Balance was shortlisted for the Booker prize, has won countless others, and even made it onto Oprah Winfrey's Book Club. It hasn't been to everyone's taste. Germaine Greer hated it and said it in no way resembled the India she had come to know after spending all of four months there. Others have criticized Mistry for appropriating a turbulent time in Indian politics to meet his own ends and the needs of his characters. Personally, I don't understand this criticism, unless such critics balk at the atrocities of those times coming under public scrutiny after such a long period. In A Fine Balance Mistry explores the inherent inequalities of the caste system, extreme poverty, high level corruption, and life during the turmoil of Indira Gandhi's Emergency, and the sterilization programme, and the 'Beautification' policies, which led to the forced removal of street-dwellers into indentured labour. His characters are drawn from many Indian communities including the Parsi, Hindu, Muslim communities; from Untouchables to Prime Minister, from beggars to thieves; but there are four central characters of different backgrounds and histories, and it is through their hearts and minds that the story is told.

It is a tale of a Parsi woman, Dina, two tailors and a student from the north, four disparate people whose lives, outlooks, preconceptions and prejudices are fundamentally changed over a period of time after their first meeting. Tragedy exists at the heart of each of their stories, it permeates each page, yet the resilience of their spirit sits right next to it, tempering it. 'You have to maintain a fine balance between hope and despair' - and quite simply, that is exactly what Rohinton Mistry does.

His work speaks to me as an Indian, but it is universal in scope and in its depiction of humanity. He is, above all, a writer who plunges you, heart and mind, deep into his stories, where you remain submerged until the final page has been turned and you come up, gasping for air.

'... his sentences poured out like perfect seams, holding the garment of his story together without drawing attention to the stitches' - this is a line spoken by one of Mistry's characters, and perhaps best describes the mastery and craft of Rohinton Mistry himself.

In A Fine Balance he has created a complex and tightly-woven tapestry of humanity at its best and at its worst. For me the book is a literary masterpiece. It is a story you will never forget. His most recent novel Family Matters was published in 2002, but I am sure that I am not alone when I say that I am still waiting for Mistry’s next story.

A Fine Balance is published by Faber.