A POCKETFUL OF CROWS by Joanne M Harris 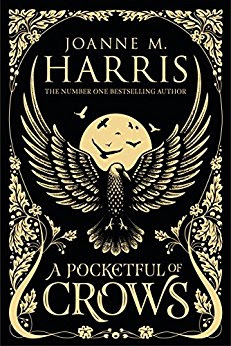 "Ultimately, it's a tale of survival and of female strength and resilience..."

Linda Newbery has written widely for young readers and is now working on her second novel for adults. See more on her website.
Before getting far into this beguiling novella, I found myself thinking of folk ballads such as Tam Lin and The Demon Lover and hearing the voices of Maddy Prior, Martin Carthy and Sandy Denny. On finishing, I looked up The Child Ballads, 295, which inspired it (I am as brown as brown can be / And my eyes as black as sloe; I am as brisk as brisk can be / An wild as forest doe) and found that both Maddy Prior (with Steeleye Span) and Martin Carthy have indeed made recordings; I've added the link to the Steeleye Span version at the end of this piece, and you can listen to Martin Carthy on Spotify.

The story is steeped in folklore, from references to Jack-in-the-Green, the May Queen and the Winter King to the passing of the months marked by their moons: Hunter's Moon, Blood Moon and others, each carrying its own superstitions. We're in territory familiar from folk ballads - love, death, betrayal and revenge, and bewitchment by a creature not human but faery. Here our perspective is that of the enchanter, who to regain her true self must in turn free herself from bewitchment.

"I have no name," this bonny brown girl tells us. "The travelling folk have neither name nor master. A named thing is a tamed thing." But when given a name by her human lover, she loses her power of shape-shifting, of taking on animal forms - hare, vixen, frog or nightingale, as she chooses. After the young aristocrat William names her Malmuira, meaning Dark Lady of the Mountains, she thinks: "I wear (my name) like a golden crown. I wear it like a collar ... I am a wild bird in a snare;" and is restlessly limited to her own self.

There are inherent dangers in romances between mortals and faerie folk, as Katherine Langrish describes in an eloquent and wide-ranging piece in Seven Miles of Steel Thistles*. "Whether mortals woo, ravish or capture supernatural women, whether mortals themselves are carried off or seduced, marrying a fairy bride nearly always leads to grief at best, to death at worst." Our bonny brown girl is both enchanted and enchantress, destined to fall in love with William, and he with her, from the moment she picks up the adderstone, a love-charm left by a village girl at the hawthorn tree that stands within a stone circle.

Inevitably, their love is short-lived: "My love he was so high and proud / His fortune too so high / He for another pretty maid / Me left and passed me by."  Our bonny brown girl, though, isn't going to retreat to her woodland cave to pine and die: in the form of a wolf she has ripped out the throats of sheep, so we know she can be ruthless. Now she plans revenge, with the help of hawthorn - an ageless female figure who gives her a seemingly impossible spell (bringing to mind another folk ballad, Scarborough Fair) by which she can free herself of her bond to William, and punish him. William has tangled with the traveller folk at high risk to himself.

Ultimately, it's a tale of survival and of female strength and resilience. Who is that village girl? Who is hawthorn? And who is the white-headed crow, our bonny brown girl's companion and messenger as she goes into exile, accused of witchcraft? It all comes together both surprisingly and satisfyingly.

Many readers will know Joanne Harris from her very popular Chocolat, Gentlemen and Players and others. As Joanne M Harris she writes stories inspired by mythology, and here she has found a sure-footed style which is lyrical without being indulgent. "I have no need of silks and furs. I have no need of servants. I have the silk of the dragonfly's wing, the snowy coat of the winter hare. I have the gold of the morning sun, the colours of the Northlights." Fine pencil drawings by Bonnie Helen Hawkins show animals and vegetation in realistic detail - I was particularly impressed by the wolves, and by William on his rearing horse - while for characters she doesn't go for Burne-Jones-like ethereality but for expressive, vivacious faces which could be those of modern teenagers. Gollancz have made this beautiful little book a pleasure to handle.

A Pocketful of Crows is published by Gollancz.