Guest review by Graeme Fife: THE FORTNIGHT IN SEPTEMBER by R G Sherriff 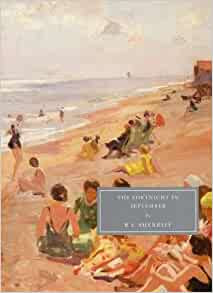 "... read and discover it, the beauty and sensitivity of its language, the tenderness, the undemonstrative power of its delicate fiction..."

Graeme Fife has written many plays, stories, features and talks for radio, stage plays and articles for newspapers and magazines, and is now a regular contributor to BBC Radio 4's From Our Own Correspondent. He's the author of a string of books - children's stories, biography and works of history. Great Cycling Climbs, which brings together his books on the French Alps, is published by Thames and Hudson. His latest novel, No Common Assassin, set during the French Revolution, is out now.

RC Sherriff is best known for his harrowing play Journey’s End, written out of the trauma that he, like so many others, suffered on the Western Front in WWI. It’s an account of character disintegration, overbearing stress and unendurable levels of pressure and expectation added to the appalling physical, emotional, intellectual and moral shock of mechanized and human violence. Sherriff, some years after he had come home, all but broken, wrote this novel. ‘It couldn’t be a play,’ he wrote in his autobiography of 1968. ‘It wasn’t the sort of story for the theatre. And in any case, plays were done with.’

Of The Fortnight in September, in which Sherriff placed little confidence, Victor Gollancz, his publisher, said that he ‘would not alter a word of it’. As to the validity of such an accolade, you must make your own judgement. However, I am offering a review here, because having been alerted to its qualities by a dear friend, I relay my admiration of it and encouragement to read and discover it, the beauty and sensitivity of its language, the tenderness, the undemonstrative power of its delicate fiction.

‘From the distance, Mrs Huggett’s white lace cuff looked like a handkerchief being waved. They could not see her bad eye any longer and she looked quite tall and dignified standing there by the gate in her black silk dress.’

Tiny detail picked out to make a sort of pointilliste portrait, a mark of the level of writerly care Sherriff took in the composition and making of a very simple story. The title outlines it: a family going away for an annual holiday to the same place each autumn. The knowing about every step of what is a modest adventure away from a seemingly humdrum existence of work and belonging to a club and not much else: the family car, the preparation of suitcases (same clothes every time? Probably), the journey, the place they stay in, the town and its known highlights, the beach, the favoured hut in its ideal position, the games on the sand, dips in the sea, tea and cakes, ice creams, an occasional drink at the pub and recognizing the same regulars…all very untoward but, in sum, a finely embroidered catalogue of small delights amounting to the treat, the change, of place, space, activity, thought and impression. How easily we neglect the mundane which is, after all, the stuff of our living and, for sure, our being. It’s Sherriff’s great skill that he can lift out of the mundane the singular essences which, so often overlooked, give us grounding, the base of our larger enjoyments and appreciation. ‘Once a year, the old man had a clear out, and a cart came from somewhere to take the useless junk away.’

How difficult the writing of fiction can be, unless these minor lessons are learnt and absorbed, from the balder advice: ‘Show, don’t tell,’ crucial but no more vital than the little things, ‘the unconsidered trifles’, the focus on what is so easily missed, discarded with a pathetic excuse of ‘irrelevance’. Pah. It’s all relevant, every scrap, and Sherriff’s seeming non-story is, in fact, a narrative of lovely concern and consideration centering on the relationships of family members who may not effuse but release their feelings in a variety of minor reactions. Yes, a tale of great humanity because, I suggest, Sherriff has seen humanity pared to a thin sliver almost to extinction and yearns for and cleaves to it. Hard, maybe, to think of this novel as his own riposte to the more savage force of his better-known play, but perhaps it is just that: a cri de coeur in dulcet tones, a gentle portrait of how caring shows itself and is accepted, nurtured, even unbeknownst, and, to our shame, sometimes neglected. Not here. Beach cricket, that stalwart of the seaside holiday, out with the stumps, the bat and ball, placings known, ball in the sea – who’s to run in after it? – fills out, somehow, the unwritten sound of the laughter, the hidden smiles, the silly chuckle that contrasts with how the fortnight in September rescues them from the harsher grating of the everyday upsets, this ordinary family, with their ordinary pleasures and needs and, as ever, their extraordinary bonds and affiliations.
The Fortnight in September is published by Persephone Books.

No Common Assassin is available from Kindle.
Posted by Linda Newbery at 00:00