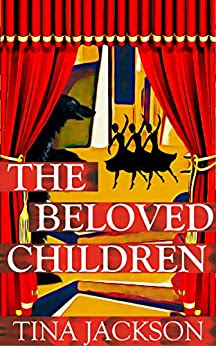 "This is a book to read twice. Let the first reading sweep you into Jackson’s mesmerising real-but-not-real world. And then read it again to see how she does it: storytelling at its best."

Yvonne Coppard is a Writing Fellow of the Royal Literary Fund and writer of fiction for children and adults. See more on her website.
In the last phase of the Second World War, three young women are brought together as ‘The Three Graces’ dancing act. Chrysanthemum is escaping the tyrannical control of her adoptive mother, who is determined to obliterate her mysterious powers. Rose comes from a loving showbiz family but longs to see the world. Orage is a mesmerising beauty whose sexual appetite has estranged her from her parents. Dolores and Janna, the eccentric wardrobe mistresses, take the Graces under their wing. Together, these women form a bond that transcends the seedy world of itinerant misfits and fugitives brought together in the dying days of variety theatre. There is secrecy and tension, often a sense of impending doom. But there is humour too, and the resilience and tenacity of this hotch-potch community shines through.

Jackson embraces the magic of theatre and circus; she plays with both in a way that recalls Angela Carter’s gift for magical realism. The five main characters are an outstanding creation, individually and in the mix. The narrator’s voice periodically cuts into the story to unsettle the narrative strand and promote the sense of mystery:

"Sometimes life alters as suddenly as scenes change in the theatre. In a sudden twist of fate, Chrysanthemum and Rose are removed from the world of flatties and ticket buyers. The curtain falls, and rises again, and here they are, in the world within the woods which is where Janna and Dolores pass their time. A world with its own ways. A world where unreal things are everyday occurrences. A world where seeing is believing."

We are also taken to the everyday drudgery of hand-to-mouth existence in oppressive lodging houses, precarious encounters that can be disruptive and dangerous. Time is a shapeshifter, and the reader must share some of the questions and unknowns that shadow the lives of the characters. Tantalising snapshots of individual histories break through and recede as real-time events mix with memories of the past. Their stories grip, entice, and unsettle. But fear not. Everything comes together in the final pages, bringing a satisfying resolution with twists and turns right to the end.
This is a book to read twice. Let the first reading sweep you into Jackson’s mesmerising real-but-not-real world. And then read it again to see how she does it: storytelling at its best.

The Beloved Children is published by Fahrenheit Press
Posted by Linda Newbery at 00:00