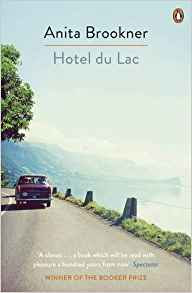 "I loved the clear-headedness, the humour, the questions it raises..."

I’ve been thinking about love lately, partly because that’s what I’m writing about at the moment, and it seemed a good idea to re-read Anita Brookner’s novel about a romantic novelist. It won the Booker Prize in 1984, controversially, with Malcolm Bradbury among others dismissing it as slight and unworthy; his word was ‘parochial’. But Linda Grant described it recently as ‘the perfect novel about romantic love and how the idea of it can shape or deform your whole identity’ and I rushed to find my copy, eager to learn.

I don’t want to say too much about the plot as one of the many pleasures of the novel is the slow revelation of what happened before spinster-appearing Edith Hope, aka romantic novelist Vanessa Wilde, arrives at the Hotel du Lac in Switzerland. She has committed a social gaffe, causing her friends – if friends they are – to dispatch her to this old-fashioned respectable establishment to re-think and possibly to mend her ways. Women’s friendship and the pressure to conform and play the game of life as lived by those friends is a sub-theme. Tweed-skirted and cardiganed, Edith is not what she seems. Edith has a lover, a married man to whom she writes long letters from exile, and at first we think he is her gaffe, but no. There is something else.

Edith’s clear-headedness is expressed in clear prose, her romantic heart in emotional sighs – there’s a lot of ‘Oh David!’ - and descriptions, sometimes lengthy but not to be ignored. They’re never just description but reveal the character and relationships of the perceiver or perceivers; when for example Edith and Mr Neville, a fellow guest, walk by the lake at sunset and turn back, ‘unwilling to witness the ritual extinction’ you know there’s something amiss. This isn’t a novel of bright colours, well only here and there; there is a lot of grey, three on page one, setting the tone, but this is not a dismal book. Things liven up.

Edith, aka Vanessa, is clear about what romantic fiction is. She is, she says, recycling the tortoise and hare myth: ‘In my books it is the mouse-like unassuming girl who gets the hero, while the scornful temptress with whom he has a stormy affair retreats baffled from the fray, never to return. The tortoise wins every time. This is a lie of course. . . In real life, it is the hare who wins. Every time. Look around you. And in any case it is my contention that Aesop was writing for the tortoise market . . . Hares don’t have time to read.’

I loved this: the clear-headedness, the humour, the questions it raises. Is Edith a tortoise or a hare? We are left wondering, but she is surely both. She is a man’s mistress after all – a hare in tortoise’s clothing? As she intimates and demonstrates in this novel, real life is much more complex than the stories she writes, but she does not write them cynically. She is not scornful of her readers, (except for one perhaps), recognising that they, like her, need romance in their lives, that they need to believe one can adore and be adored, that love can last, that longing will end in fulfillment, that there is, if only in stories, a happy ever after. Edith believes in love and hopes for it. Edith Hope? It’s a risky belief though in real life, and even more so in later life. Edith, in her late thirties, is scornful of Mrs Pusey, a septuagenarian and an avid reader of her books – she is reading one unaware the author is sitting nearby – and sees her as gross and absurd with her declaration that she is an unashamed Romantic, boasting how she was worshipped by her late husband, and still flirting while spending his money. It’s a harsh portrait, but only slightly less harsh is her depiction of Mr Neville, a declared un-Romantic. ‘Without emotional investment one can do as one pleases.’ Both are depicted as shallow and materialistic, lacking something vital, lacking love, as are the other clients. Hotel du Lack? Perhaps it is Mrs Pusey’s hypocrisy Edith despises, using romance as a cover for a love of shopping, and not her age. I hope so.

Anita Brookner said modestly of her own books they were ‘quite nice but unimportant’. But if the mere idea of romantic love ‘can shape or deform your whole identity’ then a novel exploring its power in a variety of brilliantly drawn characters and relationships, can’t be dismissed as trivial, not by me. Hotel du Lac is deceptively simple and in its own way profound. It doesn’t explore the many splendours of love but it does show with poignancy and humour the greyness of lives in whom it is missing.

Hotel du Lac is published by Penguin.
Posted by Linda Newbery at 00:00