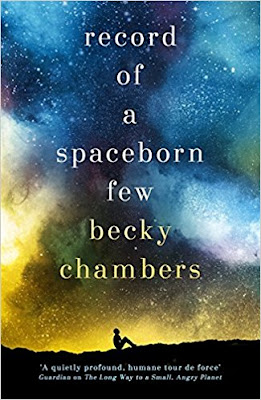 Joanne Harris (MBE) was born in Barnsley in 1964, of a French mother and an English father. She studied Modern and Mediaeval Languages at Cambridge and was a teacher for fifteen years, during which time she published three novels, including Chocolat (1999), which was made into an Oscar-nominated film starring Juliette Binoche and Johnny Depp.

Since then, she has written 15 more novels, two collections of short stories, a Dr Who novella, guest episodes for the game Zombies, Run and three cookbooks. Her books are now published in over 50 countries and have won a number of British and international awards. She is an honorary Fellow of St Catharine’s College, Cambridge, has honorary doctorates in literature from the universities of Sheffield and Huddersfield, and has been a judge for the Whitbread (now Costa) Prize, the Orange Prize, the Desmond Elliott Prize and the Royal Society Winton Prize for Science.

She works from a shed in her garden, plays bass in the band she first joined when she was 16, is currently writing a screenplay and lives with her husband and daughter in a little wood in Yorkshire.

The first volume of Becky Chambers’ Wayfarers trilogy, The Long Way to a Small, Angry Planet was by far the best sci-fi novel I'd read in a long, long time. Genuinely different to the mainstream of the genre, inclusive and compassionate, it seemed to me to be doing what speculative fiction has been trying (and mostly failing) to achieve for most of the ‘90s. Two volumes later, I am convinced that Becky Chambers is near the forefront of a long-overdue revolution in a genre that has been seen for too long as very male, very white and with a general tendency to value space battles over psychology. Not that there’s anything wrong with space battles. But, with some noble exceptions, sci-fi has traditionally been seen by many as an action genre, plot-heavy and character-light, with aliens often presented as thinly-disguised racial stereotypes, and women as love interests, rather than fully-formed protagonists.

Becky Chambers’ first novel forms part of a fresh, new wave of sci-fi. Initially self-published when mainstream publishers failed to see its potential, or to understand the deep demand among readers for increased diversity, it is lighter on plot than most sci-fi, but far richer in character development. It concentrates on powerful themes of belonging and identity, and treats the concept of alien-ness - in terms of race, gender, sexuality and culture - as something genuinely different, rather than just presenting them as humans in clever makeup. The dialogue is terrific - Joss Whedon with more empathy - and the narrative style is spare and elegant and wholly, gloriously immersive.

Record of a Spaceborn Few  carries on from The Long Way to a Small, Angry Planet and A Close and Common Orbit only in that it serves to further our knowledge of the universe in which the books are set. Only one character from the first book is mentioned – and that only in passing – which means that the books can be read alone or as part of a wider exploration. I would suggest reading them all – not only because they are excellent, but because they provide an expanding overview of the author’s universe; a universe at least as important as any of the characters. Unlike most futuristic scenarios, this is a universe in which Humans are neither the dominant nor the superior species. The order that has been established within interstellar society has come from an alien culture, as has much of the technology. Humans are a minority group – white humans even more so – challenging the assumptions of so much of our traditional science fiction.

Only on the Exodus Fleet are Humans still in the majority, but the Exodus Fleet is a relic, dating from many centuries ago, still bearing the descendants of the last generation of Humans to leave Earth. This fiercely isolationist group still retains its original cultural identity, though the ancient ships are in disrepair, and supplies are always a problem. Young people wanting to explore the outside world with its many colonized planets are faced with the same kind of culture shock faced by members of certain religious groups who choose to leave their traditional environment. Some leave for good; some return, unable to face life outside the bubble.


When a disaster rocks this already fragile community, those Exodans who still call the Fleet their home are faced with an existential crisis – how to face up to the knowledge that their final destination – the stars – was reached a hundred years ago, and that they are an irrelevance in a universe that has moved on?

Within this framework, the author manages to weave themes of inclusivity and diversity into her sci-fi, along with representations of mental illness, body dysmorphia, xenophobia, depression, gender fluidity and so on - all with the most delicate touch, and in a way that feeds directly into the plot, rather than appearing pasted-in for the sake of political correctness. This is the real deal emotionally: the characters are well-rounded, original and relatable, and the underlying ideas are compassionate and true. It's also a cracking story, well-paced and compelling, with more than enough plot to satisfy, but with a nice, grown-up element of personal and emotional growth, too.

The story is seen through the eyes of a number of different characters – a young mother; a hopeful visitor struggling for acceptance; a young man desperate to leave – all these stories intertwined to make up a larger – and strangely familiar – narrative. A tale of a grieving community; a tale of misplaced ambitions; a tale of optimism and rejection; a culture willing to do almost anything rather than face the outside world. The parallels with current events are inescapable, and yet are delivered with a welcome lightness of touch.

Imagine The Grapes of Wrath, set in space, with all the intensity, heartbreak and tension that implies. And grieve a little for the fact that the mainstream literary world is so slow in acknowledging the scope, skill and literary value of sci-fi - although frankly, anyone who scorns sci-fi as a lesser genre really doesn't deserve to read anything as splendid as this.

Record of a Spaceborn Few is published by Hodder & Stoughton.
Posted by Linda Newbery at 00:00