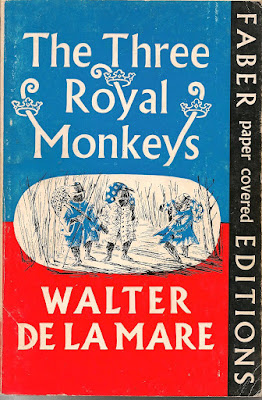 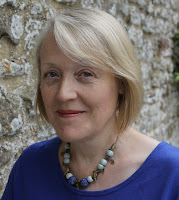 Katherine Langrish is the author of a number of historical fantasies
including the trilogy  West of the Moon, and Dark Angels (HarperCollins).
Her most recent book is Seven Miles of Steel Thistles (The Greystones
Press),  a collection of essays on folklore and fairy tales based
on her award-winning blog of the same name.

As far as I'm aware this is Walter de la Mare’s only novel-length book for children. It was first published in 1910 as ‘The Three Mullar-Mulgars’, a title so unhelpfully baffling even by early 20th century standards that by the time I read it in the 1960s it had been rechristened. Even as ‘The Three Royal Monkeys’ I think it’s not particularly well known. Which is a great pity.  As a child I was entranced by it, and I still am.

To explain the impression it made on me, here’s a bit of personal history. I began seriously to write stories when I was ten. I’d just finished all the Seven Chronicles of Narnia and CS Lewis was dead, so I knew there wouldn't be an eighth.  (‘The Last Battle’ was such a betrayal. The end of Narnia?  Nooooooo!  And I wasn’t fooled by all that ‘heaven is Narnia, but better’ stuff, either. There was no better place than Narnia.)

Aged ten therefore, my first 'book' was called ‘Tales of Narnia’: fan-fic before the term was invented.  My second, a full-length effort, was an historical novel which owed at least something to those of Mary Renault whose ‘The Bull From the Sea’ I had discovered in Ross-on-Wye public library. Then, aged 13 or so, I wrote another ‘book’ of short stories which I called ‘Mixed Magic’ (truly mixed: some not bad, some terrible) mainly derived from two more beloved writers, Edith Nesbit and Elizabeth Goudge. When I was 15 or 16 my fourth handwritten manuscript was heavily influenced by early Alan Garner (children encounter mysterious stranger in dripping English woods, pursued by minions of the triple Moon Goddess: standing stones and indifferent golden-faced elves figured largely). But my fifth effort, written in my late teens and early twenties, by which time I was beginning to find my own voice, owed a great deal to the enchantment I found in ‘The Three Royal Monkeys’.  I called my story 'The Magic Forest' and went on to write a sixth full-length ms (also unpublished) before eventually getting myself into print with ‘Troll Fell’.  And I enjoyed every minute of all of it.

The quality in ‘The Three Royal Monkeys’ which I endeavoured to reproduce in my fifth opus was a rich, exotic beauty tinged with pathos and melancholy, relieved by sure touches of comedy.  De la Mare tells the story of three monkey brothers who, upon their mother’s death, discover they are heirs to a great kingdom. This is how it begins.

On the borders of the Forest of Munza-Mulgar lived once an old grey Fruit Monkey of the name of Mutta-Matutta.  She had three sons, the eldest Thumma, the next Thimbulla, and the youngest, who was a Nizza-neela, Ummanodda.  And they called each other for short, Thumb, Thimble and Nod.  The rickety, tumble-down old wooden hut in which they lived had been built 319 Munza years before by a traveller, a Portugall or Portingal, lost in the forest 22,997 leagues from home.

The comic exactitude of this, and the strange names, entranced me. After the ‘Portingal’ dies, a monkey comes to live in the hut. He finds:

... all manner of strange and precious stuff half buried – pots for Subbub; pestles and basins for Manaka-cake, etc; three bags of great beads, clear, blue and emerald; a rusty musket; nine ephelantoes’ tusks; a bag of Margarita stones; and many other thing, besides cloth and spider-silk and dried-up fruits and fishes.  He made his dwelling there and died there.  This Mulgar, Zebbah, was Mutta-Matutta’s great-great-great grandfather.  Dead and gone were all.

But one day a royal traveller arrives, Seelem: ‘own brother to Assasimmon, Prince of the Valley of Tishnar’, accompanied by his servant.  Seelem becomes Mutta-Matutta’s husband. After thirteen years of marriage he leaves her to return to his heritage in the beautiful valleys of Tishnar. Seven years later on her deathbed, she urges her sons to follow their father.

The rest of the book follows the brothers’ difficult and magical journey. Nod, the youngest, is ‘a Nizza-Neela, and has magic in him’: he is the possessor of the marvellous Wonder-Stone, which if rubbed when they are in great danger will bring the aid of Tishnar to them.

And who is Tishnar?  There are many mysteries in this book and she is one of them, with a whole chapter at the end dedicated to her.  She is ‘the Beautiful One of the Mountains’; ‘wind and stars, the sea and the endless unknown’.  She it is who instils in the heart a sense of longing; she brings peace and dreams and maybe, in her shadow form, death.

At any rate, the brothers’ journey is precipitated when Nod accidentally sets fire to the hut. In the fairytale tradition of the foolish yet wise younger brother, he makes many mistakes, but he is also the one who saves his brothers from the predicaments in which they find themselves as they trek through the deep moonlit snow of the winter forest – escaping the flesh-eating Minnimuls, tricking the terrifying hunting-cat Immanâla, riding striped Zevveras – the ‘Little Horses of Tishnar’ – finding friends and losing one another, quarrelling and making up.

It’s a deeply serious quest, an epic journey with no hint of tongue in cheek despite the fact that the protagonists are monkeys.  Delicately, de la Mare explores the transience of beauty, the poignancy of loss, the immanence of death: and his characters blaze all the more brightly in their course across this impermanent world. There’s a lovely chapter in which Nod meets and loses his heart to a beautiful Water Midden (water maiden) to whom he entrusts his Wonder-Stone.  Here is the song he overhears her singing ‘in the dark green dusk’ beside a waterfall:

Bubble, Bubble,
Swim to see
Oh, how beautiful
I be,

Fishes, fishes,
Finned and fine,
What’s your gold
Compared with mine?

Why, then, has
Wise Tishnar made
One so lovely,
One so sad?

Lone am I,
And can but make
A little song,
For singing’s sake.

If you haven’t read this book before and you’re looking for something at least as good as ‘The Hobbit’, this is for you. 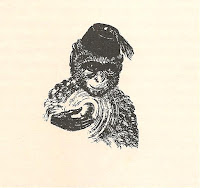