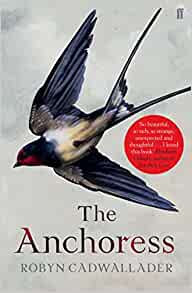 "engrossing ... brought to life in an imaginatively convincing way."

Ann Turnbull has been writing stories for young people of all ages since 1974. Her most recent book is In That Time of Secrets, a young adult novel about the persecution of Catholics in 1605, set in the Black Country. Find out more at www.annturnbull.com

This compelling novel tells the story of a young woman in medieval England who becomes the anchoress in a rural church. Her difficulties in settling to a life of prayer and contemplation have been brought to life in an imaginatively convincing way. The anchorhold is minutely described. Sarah measures it out: nine paces long by seven paces wide. There are two small windows into outer rooms, one for her servant to use, the other for visitors. She is also provided with a squint into the body of the church, which gives her a view into part of its interior - but the squint is angled so that she has no direct view and cannot be seen. A large crucifix dominates her cell, and a small window high up lets in a little light.The door is bolted. Under the stone floor are the bones of one of the two previous anchoresses. In this damp, cold place she prepares to spend the rest of her life.

Sarah is attended by a servant and a young girl who are there to make her life run smoothly and give her time for reading, prayer and contemplation. But she is an object of much interest to the women of the surrounding villages, who call in, one by one, to see her and talk to her. They don't come in need of spiritual help so much as information about her and to chat about the life of the village. One of the women says she thought she'd pop in just to be friendly, because "don't you long for a good natter sometimes, Sister?" The villagers are fascinated by the anchoress, and as they talk about their own lives the story expands to include the entire community.

Some of the chapters switch to the point of view of Father Ranaulf, a priest at the priory. Ranaulf has been appointed Sarah's confessor and visits her regularly, advising her on her reading and how to practise her calling. From Ranaulf's chapters we get a sense of the wider context of the anchoress's life and how it is overseen.

Two dark events haunt Sarah. One is the memory of how the lord of the manor had pursued and tried to force her, and how he remains a danger to young women. The other is the death in childbirth of her beloved sister, Emma. Sex and childbirth and the danger and grief they present for women are at the heart of this story. There have been two previous anchoresses, one of whom is buried beneath the floor of the cell and causes Sarah fear in her darker moments. The story of the other one is gradually revealed. Sarah struggles to subdue hunger and cold and to keep up with her spiritual reading. At first she is too hard on herself and is embroiled in outside events, but in the end a way forward becomes clear.

This is an engrossing book, which brings to imagined life the experience of becoming an anchoress. The style is not at all archaic, even though Sarah's lifestyle seems so alien now. And I found the ending very satisfying.

The Anchoress is published by Faber.
Posted by Linda Newbery at 00:00