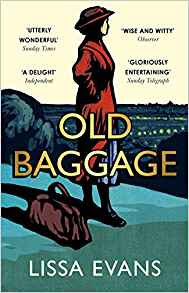 "An absorbing story of faulty, empathetic, endearing, infuriating characters one truly cares about."

Pippa Goodhart has written over a hundred books for children. Best known is her picture book You Choose, illustrated by Nick Sharratt. Her most recent children’s novel, The Great Sea Dragon Discovery, set in her home village of Grantchester, has just won this year’s Young Quills Award for best historical children’s novel for 10-13 year olds. More on Pippa's website.


This is an absolute joy of a book. I loved it so much on first reading that I deliberately slowed my pace in order to savour it. I then set it as my book group read choice, and every one of that opinionated and interesting group also loved it, which is a rarity! Everybody liking a book can sometimes kill off debate about it. But this book gave us much to discuss, especially since we are of a generation who remember from childhood the elderly spinster characters created by the First World War’s cull of young men, some of whom had notable political and social opinions.

Mattie, in her fifties, was a Suffragette, as was her lodger Florrie, ‘the Flea’, Lee and various other wonderfully individual characters in the book. But they are living in a Britain that feels it has moved on from that particular fight. Living on the edge of Hampstead Heath, Mattie decides to set up a club for girls, promoting political and social debate, good healthy exercise, games and competitions … and javelin throwing, which doesn’t go down well with her stuffy retired Major neighbour. Set in 1928, this is a story with heart, much historical interest, great wit and humour, and utterly brilliant writing. I’m not going to give away more of the plot because it’s a delight to discover for yourself, but there are certainly uncomfortable parallels between the time it depicts and our present time. Mattie has never had to work for her income, giving an uncomfortable edge to her strong ideas about how working class girls and women should behave. There is hypocrisy, but isn’t she still mostly right in what she thinks? Some in our reading group had fresh experience from the Extinction Rebellion protests in London, demanding government action to heal the climate, and yet these are people who frequently fly off on holiday, some have more than one home, and so on. Similarly, hypocrites, but right? On a different tack, there is talk of ‘laws upheld by those who were apparently beyond the reach of it themselves’. Much food for thought and discussion, but, first and foremost, an absorbing story of faulty, empathetic, endearing, infuriating characters one truly cares about.

Let me give you some small tasters of that brilliant writing. We get an instant feel for Mattie when, early on, she ‘swished past like a Daimler.’ How many of us recognise her problem of middle-aged eyesight when she tells her optician, ‘I find I am living in a perpetual Pissarro.’ The Major next door ‘looks like a classical statue carved out of brisket.’ Florrie, in a sulk, ‘draped the oblong of pastry across the pie dish with the visage of someone easing a flag over a coffin.’ Teenage Inez, part of Mattie’s club, was ‘participating, though only in the way a stick participates when borne along by a stream.’ … And so much more. The period language is a delight too. ‘You don’t look quite the thing.’ ‘She is an absolute pill.’ Do read the book and find your own favourites!

For those who may have read other books by Lissa Evans (do try her children’s books as well as her adult ones), let me just place Old Baggage in book context. Evans’ The Crooked Heart was written and published before Old Baggage, but Old Baggage is a prequel to Crooked Heart, explaining the odd pairing of a couple of characters who nagged for further attention.