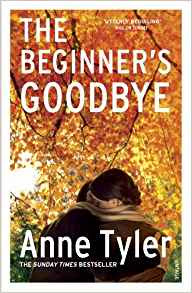 Elizabeth Enfield is a journalist, novelist, short story writer and intermittent teacher of all. Her short stories have been published in various magazines and broadcast on Radio 4 and her latest novel, Ivy and Abe, is out now, published by Penguin. For more details see her website, or follow her on twitter @lizzieenfield

Anne Tyler has written twenty novels and, while only having read about a quarter of her output, I’m a huge fan of her work. In a world where the news and the bookshops often appear to be dominated by crime, tragedy and acts of inconceivable darkness, Tyler’s sphere is domestic: the quotidian drama of ordinary existence. She writes about it in a way that is utterly compelling, vividly imagining the smallest details and shining a sympathetic and understanding light on the human condition.

Tyler’s last novel, A Spool of Blue Thread, was nominated for the Booker Prize - an utterly deserving contender and one I loved, but I’ve chosen an earlier novel, The Beginner’s Goodbye, to review here. It’s a short, almost novella length book, but contains everything that Tyler does so well: turning the ordinary into something extraordinary, lending difficult characters a certain nobility and rendering the mundane remarkable.

I recently chose to revisit this novel as my next book is about grief, about what happens to the parents of a child, who are long separated, following the death of their only child. Grief is not the most uplifting subject to tackle and yet Tyler has addressed it repeatedly in her novels, teaming it with her familiar theme of regret, one of grief’s chief companions.

The chief protagonist and narrator of The Beginner’s Goodbye is Aaron Woolcott, an emotionally repressed man, with a partial paralysis that necessitates walking with a stick and a bad stutter. He works for the family publishing company, a vanity press and home to the Beginners series of guides to small slices of life, mirroring Tyler’s own fictional territory.

Aaron’s wife Dorothy, a no nonsense doctor and eight years older, is a “non caretaker” where his mother and sister are cosseters, even in Aaron’s mid thirties. Their marriage functions on lack of fuss and fairly minimal interaction. But when Dorothy dies in a freak accident – involving an oak tree, a sun porch and elusive biscuits - Aaron’s carefully constructed world begins to fall apart.

He rejects the sympathy of friends and colleagues, throws away their kindly meant casseroles and appears to take a self-punishing delight in not needing anyone.

But then Dorothy starts showing up, the most un-spectral ghostly apparition ever: a solid presence, which Aaron summons up out of his loneliness.

Initially, she only drops by briefly but then she stays for longer. They talk, and bicker the way ordinary perfectly happily but not that happily married people do. Through their encounters, the limitations of the marriage are gradually revealed and Aaron begins to realize and regret the cost of his self-protective shell and unwillingness to open up to others.

With solid spectral Dorothy he finds it much easier to talk honestly and openly than he did with the real one. He even loses his stutter when they chat! And slowly he begins to say goodbye, and at the same time to say hello to the world, in a way he has never done before.

What Tyler captures here, so well, is the contradictions of the human condition: how we can love so imperfectly and feel so deeply the loss of someone to whom we are almost tragically mismatched.

In the pages of crime novels, we find resolution about what’s happened. In Tyler’s slices of life we find emotional resolutions – small but truthful ones.

On the penultimate page of The Beginner’s Goodbye, Aaron discusses whether the dead ever really visit with his friend Luke.

Luke thinks they don’t. “But I think if you knew them well enough, if you’d listened to them closely enough, while they were still alive, you might be able to imagine what they would tell you even now.”

It’s a beautiful sentiment, one which Aaron decides to heed. And one which beautifully illustrates the appeal of Tyler’s writing. She pays close attention to her characters; so close that still talk to you, long after the final pages of the novels they grace.

The Beginner's Goodbye is published by Vintage.