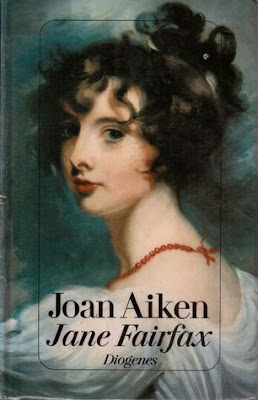 "This was an unexpected treat, and now I'm eager to see what Joan Aiken has made of Mansfield Revisited."

Linda Newbery has written for young readers of all ages, and won the Costa Children's Book Prize for her young adult novel Set in Stone. She currently has two works in progress: one for David Fickling Books to be published in July, the other an adult novel.

Recently I learned on Facebook the term 'joyreading': taking a book from a friend's shelves and becoming immersed. This was just such a find, on a recent stay with a good friend. I dipped in, was soon hooked and asked to bring the copy home when I left.

Till then I'd had no idea that the admirable Joan Aiken - famed for The Wolves of Willoughby Chase and many other highly-acclaimed children's titles - had produced a group of books based on Jane Austen novels. This one, subtitled A Novel to Complement EMMA by Jane Austen, published in 1990, fills in and elaborates on the life of the young woman described in some editions as 'the second heroine' of Emma.

In the first and much longer of the two sections we follow Jane Fairfax through childhood and adolescence, to her prolonged stay in London with Colonel Campbell and his family, briefly to the West Indies and back, to the point where she returns to Highbury and we join the well-known events of Emma. The seeds of resentment between Emma Woodhouse and her less privileged companion are sown early: the two girls share a piano tutor who finds Jane far superior in both talent and application. Jane - dressed in hand-me-downs from Emma and her sister Isabella - becomes a favourite of Emma's mother (who soon dies in childbirth) and also of Mr Knightley. However, while Emma looks forward to a life of comfort and indulgence, Jane will be expected - as we know - to earn her living as a governess.

In Emma, Jane is often seen as frail and nervous, susceptible to sore throats and chills as well as frequent headaches (in Aiken's hands she's clearly a migraine sufferer); but here she is spirited and often outspoken during her time with the Campbells, taking a protective role towards the Colonel's anxious daughter, Rachel. In London and during an extended trip to Weymouth we meet character types familiar in Jane Austen: vapid young men, spoilt and coquettish young women, elderly grande dames and brusque military men. Less typically, Mrs Campbell is a social reformer, much preoccupied with campaigns for penal reform and against the slave trade. Like most of the authors now drawing on Austen, Joan Aiken gives a wider sense of England's social gradations and its colonial transactions than we find in the originals.

Aiken cleverly embellishes Jane Austen's details of Frank Churchill's circumstances and those of the Campbells and their Irish friends the Dixons - supplying plausible reasons for Jane's embarrassment when she returns to the limited Highbury circle and is taunted by both Emma and Frank about her association with Mr Dixon and the gift of a piano. Along the way, readers familiar with Jane Austen will appreciate echoes not only from Emma but from other novels too. Jane receives a proposal of marriage from a boorish young man convinced that he has only to ask to be instantly and gratefully accepted, recalling both Mr Elton and Pride and Prejudice's Mr Collins. Dreaming that Mr Knightley will one day notice her, Jane imagines him finding her with a sprained ankle on a hillside, like Willoughby and Marianne in Sense and Sensibility.

When we reach Part Two, readers of Emma will feel thoroughly at home at Highbury as we move through a series of social occasions: the dance at the Crown, strawberry-picking at Donwell Abbey, the disastrous picnic at Box Hill. To Jane, Highbury and its endless gossip are dull and parochial, something the full-of-herself Emma doesn't realise. We bustle through this section rather quickly, but Aiken focuses our attention on Frank Churchill and his flirtation with Emma - is he taking deception too far, and enjoying it too much? The reticence of the formerly livelier Jane is made plausible by her dislike of concealment and her resentment of Emma, now a rival, which she tries to suppress.

I've recently read Jo Baker's Longbourn* which similarly takes a sideways look at a Jane Austen work rather than continuing the main character's story. Both are in their different ways highly enjoyable. While Jo Baker  favours a sensuous, descriptive vein more reminiscent of Charlotte Bronte, Joan Aiken imitates Jane Austen's style with considerable success. Punctuation, cadences, vocabulary and speech patterns are so skilfully emulated that for much (though not all) of the book it's possible to imagine that this really is Jane Austen. She is particularly good at the condensed, character-revealing monologues that typify Mrs Elton, Miss Bates and, here, her own invention, the snobbish Mrs Fitzroy: "So very odd to bring in a child from outside - such an atrocious mistake! - unknown origins, probably no better than they should be - Fairfax all very well, but Bates - what sort of a name was Bates? - child just what might be expected from such a mongrel background - encouraging Rachel to insubordination and all manner of foolish nonsense - music? of what importance, pray, was music?"

This was an unexpected treat, and now I'm eager to see what Joan Aiken has made of Mansfield Revisited.

Jane Fairfax is published by Gollancz.

(Update. For our review of Longbourn,  click here.)
Posted by Linda Newbery at 00:00