Guest review by Nicola Morgan: A GOD IN RUINS by Kate Atkinson 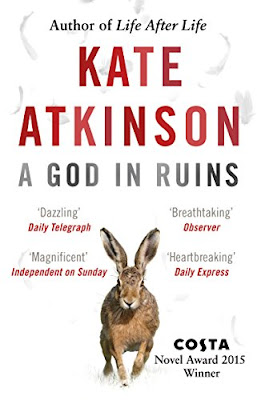 Nicola Morgan is an award-winning author of fiction and non-fiction. None of the former recently but she has been very busy writing non-fiction and speaking about adolescent brains, mental health and modern online life. Her most recent book is The Teenage Guide to Friends and next year sees publication of Positively Teenage and The Teenage Guide to Life Online. For more, see her website.


I’m a big fan of Kate Atkinson and I’ve found her books getting better and better, even after the high standard set by Behind the Scenes at the Museum. She’s uncompromising, mind-blowingly inventive, writes whip-tight wry prose, is mistress of conjuring a whole character in a few clever brushstrokes and tells a cracking story. She’s also a very nice woman: I met her when the Society of Authors in Scotland had a research trip to a police station. We made it into her next book; I forget which one but if you come across a group of authors eating pink wafer biscuits in a police station, picture me there.

I don’t know what you call a book which is neither sequel nor prequel but runs alongside another book but let’s say that A God in Ruins is a paralleloquel to Life After Life, the extraordinary novel where Ursula is born and dies again and again and again and again, imagining very different results of a series of tiny events. (I had a similar idea in Wasted – I did it first but Atkinson obviously did it rather better!)

A God in Ruins focuses on the life of Teddy, Ursula’s younger brother. Teddy was a bomber pilot in WW2 and I honestly don’t know how Atkinson was able to describe in such visceral detail the physicality of the cockpit. But this is mostly a book about what happens after war ends, the human ruins that it leaves. Or, crucially, that it might leave.

The back cover describes the book as “deliriously funny and emotionally devastating”. It’s certainly the latter but the former? I have a high laughter threshold, admittedly, but even I found my lips twisting with the humour, in the same paragraph as my heart was being ripped to pieces. Atkinson is searingly witty, that’s for sure.

For me, the emotional devastation comes mostly from the wrecked character of Viola, Teddy’s daughter. She behaves appallingly; she’s cold, snide, unpleasant to her children, unlikeable. “What kind of a mother doesn’t see her child for a decade?” she asks of herself. Late in the book she says, “Her excuse…was that she had been exiled from love after her mother died.” As Viola had been six when her mother died of cancer, this would have been entirely plausible if it weren’t that she hadn’t been likeable before her mother died. Much later, she wants to start again, although “there are no second chances”, and then she would “learn to love”. She does have a second chance and may or may not succeed in taking it. Actually, the extraordinary twist at the end gives her simultaneously another chance and yet no chance at all.

Viola has a better excuse for her damaged heart. She knows something about her mother’s appalling death – though not, crucially, the whole story. Neither Teddy nor Viola knows what the other knows, and that lack of knowledge is at the novel’s and Viola’s devastating core.

Not many books are “unputdownable” for me nowadays, with my easily-distracted mind, but this one was. The way Atkinson draws the reader in to a complex and cracking plot and then plays mind-games and emotional croquet is some kind of genius.

A God in Ruins is published by Transworld.