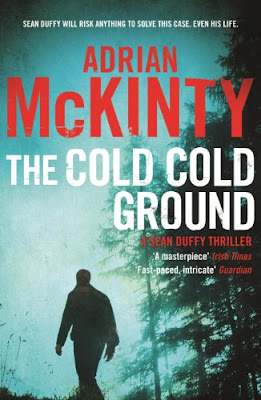 Penny Dolan works as a children’s storyteller and writer. Her last novel for older children, A Boy Called Mouse, was nominated for the Young Quills Historical Fiction Award, and she is currently completing a companion book. She posts on the History Girls, on An Awfully Big Blog Adventure and also on The Cranky Laptop Writes, her personal blog. For more, see www.pennydolan.com

The Cold Cold Ground  is the first in a series of crime thrillers set in Northern Ireland during the 1980s. McKinty grew up in Carrickfergus, so his segregated estates, damaged buildings, industrial wastelands and lonely roads are bleakly believable. Detective Sergeant Sean Duffy, his main character, even “lives” in the same council house that was McKinty’s home. Throughout the book, incidents remind the reader how angry and painful life was during the Troubles, less than thirty years ago.

The plot mixes moments of sharp fact and social realism with dramatic action. For example, so far, through the novel, Duffy has routinely checked under his car before driving away. Now, mid-story, he’s driving away from a gang of armed, drugged teenage thugs, and had no time to look.

“My knuckles were white. The downslope was coming up ... The reason the IRA use mercury tilt switches is that they only work when the mercury establishes contact on an incline or decline . . . thus it could stay safe under a car for days or even weeks ... As soon as it was driven, however, you’d eventually encounter a hill.”

Here Duffy investigates two cases: a weird double murder by a homophobic serial killer who is eager for publicity, and the apparent suicide of the ex-wife of a prisoner now on hunger strike in the Maze. As in all the Duffy books, these apparently unconnected crimes lead him deep into greater conspiracies.

Duffy is a great character: a university-educated Catholic working in the Protestant Royal Ulster Police Force. He is a compelling, cynical, street-wise hero who looks beyond accepted explanations for crimes, acts impulsively, and comes into conflict with criminals, corrupt officials and police budget restrictions. Nevertheless, among his team, there is a great sense of camaraderie: his officers, like the reader, recognise Duffy’s determination, care and courage.

Duffy’s life-style is, naturally, troublesome. He enjoys vodka gimlets in pint glasses, music and recreational drug use and is a soft touch for more than one friendly woman. His literary quotations and philosophical references can sometime feel overwritten but this is not a great problem when you can also enjoy the pace of the storytelling.

The plot’s complexity is sharpened by the everyday observations of the narrator. Through Duffy’s eyes, we experience the daily pressures of the province: the IRA bombing campaigns and road blocks; the ordinary lives worn down by riots and strikes, the antagonism between police and the British army. We see how, in a time of unemployment, both factions keep “their” local economy running through organised drug-running, EU meat parcels handed out to supporters or protection rackets.

McKinty also points out the growing media indifference: Duffy, searching the papers for important item about Northern Ireland, notes that the editions are filled with Lady Di’s wedding plans and the Yorkshire Ripper. Items about Northern Ireland are, usually, hidden several pages down, reminding the reader that media “weariness” with long-term problems is an ongoing issue.

While McKinty’s fiction seems very realistic, his story edges into dramatically complex areas. His plots often include small “walk-on parts” for real-life characters. For example, within The Cold Cold Ground  Duffy phones and meets up with Gerry Adams, while another character echoes the infamous IRA informer Stakeknife. Such real-or-not moments made me shiver a little, partly for the well-being of the author, who now lives in Australia.

As for the writing, The Cold Cold Ground  is a fast-paced crime-noir thriller: a genre rather than a literary novel. The prose contains tough language, violent sequences, sex scenes and dangerous driving. Even so, McKinty’s writing has a way of slipping between staccato sentences and lyrical description. Here’s his opening passage:

“The riot had taken on a beauty of its own now. Arcs of gasoline fire under the crescent moon. Crimson tracer in mystical parabolas. Phosphorescence from the barrels of plastic bullet guns. A distant yelling like that of men below decks in a torpedoed prison ship. The scarlet whoosh of Molotovs intersecting with exacting surfaces. Helicopters everywhere: their spotlights finding one another like lovers in the Afterlife. And all this through a lens of oleaginous Belfast rain.”

I read about McKinty’s Duffy series last year. Bookwitch, on her well-established blog, was sharing her delight about the forthcoming Duffy title. Thank you, Bookwitch! Being curious, I ordered The Cold Cold Ground  from my local bookshop, enjoyed it tremendously and have now finished McKinty’s sixth and possibly last Duffy title.

Finally, I have a too-topical reason for choosing The Cold Cold Ground.  The book may be gritty escapism but it is impossible to read this story, or the series, without worries about Brexit, the current Irish border and the uneasy political situation creeping into the back of one’s mind. The dark world shown within McKinty’s thrillers really makes one hope that the Irish Peace Process - and the people either side of that border – will not be ignored or forgotten by those in power now.

The Cold Cold Ground is published by Serpent's Tail.