OUT OF BOUNDS by Val McDermid, reviewed by Celia Rees 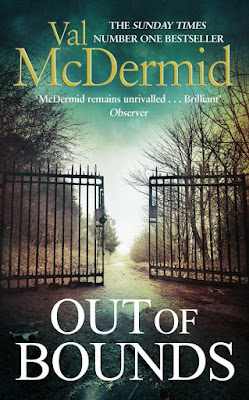 I've been a huge Val McDermid fan since her Women's Press, Lindsay Gordon days. She was one of a number of women writers in the '80s who were taking crime genre in a new direction, putting women at the centre of the action, not as victims but as detectives, or in Lindsay Gordon's case,  journalists. These women were resourceful, clever and fearless. Their personal lives were often complex, even chaotic. That didn't interfere with the dramatic tension of the novels but it allowed these writers to explore gender issues, the position of women in society. The crimes they investigated were often crimes committed against women: domestic violence, rape, sexual assault and murder but having women in the position of investigator brought a different kind of attention to crimes against women, brought them into sharper focus, looked at male motivation and drew attention to how shockingly common these crimes are.  I found writers like Val inspirational. I was a teacher at the time with ambitions to write. I'd  always read crime fiction and these writers were a revelation. I remember thinking, why not YA? (or Teenage Fiction as it was known in those days). This was what I wanted to write and I didn't see why I shouldn't fuse the two. My first novels were YA thrillers with girls driving the plot.

Out of Bounds is Val McDermid's 30th novel. Her heroine is Detective Chief Inspector Karen Pirie,  a cold case investigator with a penchant for artisanal gins and the kind of intelligent, independent frame of mind that inevitably causes clashes with her superiors. The unsolved cases that she investigates, suddenly sparked into life by new discoveries, might have been committed decades ago. The investigations are difficult, complex, often baffling, but Pirie is dogged in her pursuit of the perpetrator, or perpetrators, driven by the desire to bring justice for the victim, no matter how long ago the crime was committed.

Her new novel sees DCI Karen Pirie suffering from a personal tragedy, the loss of her partner that occurred in a previous novel. She is in a difficult, dark place, unable to sleep, she roams the city. McDermid's novels have a very fine sense of place based in the writer's intimate knowledge. She knows her places and she knows her people. Her ear is pitch perfect. Her characters, major and minor are deftly drawn and vivid.

Out of Bounds begins with a group of boys stealing a Range Rover. The teenage joy riders end up three dead, one in a coma. A routine DNA test brings Pirie into the equation.  The DNA sample seems to be the solution to a 20 year old murder case. On the surface, it seems open and shut but nothing is straightforward in a McDermid novel. Pirie and her assistant are led into an increasingly puzzling and complex maze of familial connections, none of which make surface sense.

Meanwhile, a conversation over a gin or two with an old colleague alerts her to a mystery death which is likely to be dismissed a little too quickly as suicide.  A cold case aspect allows her to take an interest and she is drawn into an increasingly dangerous political intrigue involving powerful forces determined to keep hidden what really lay behind a terrorist bombing two decades ago which had been blamed on the IRA.

Both cases twist and turn around each other in an increasingly complex way but Pirie pursues both with characteristic determination to bring justice to those who have been denied it. She allows nothing and no-one to stand in her way and this brings her into conflict, not only with her superiors but with others who will stop at nothing to keep the truth hidden.

The cold case adds real complexity to the plotting and the need for forensic and painstaking detective work. It also opens up the possiblity of real threat from those who have hidden the truth for decades and want it to stay hidden. Pirie is equal to both, as is her creator. The plotting is faultless, the tension meticulously calibrated to wind to the maximum as the novel progresses. There are no gaps, unlikely leaps or plot holes here, no questionable motivation. Nothing stretches the bounds of belief. Everything makes sense - you just don't know how until the end. With Out of Bounds,  the reader is in a very safe pair of hands.