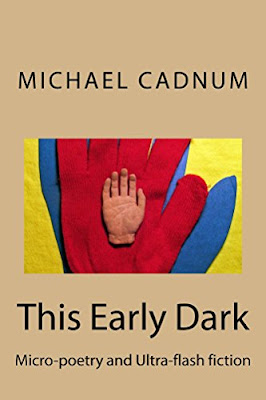 "Intimate relationships with people, with nature, with things, thoughts and feelings wheel through its pages, winking in and out like stars." 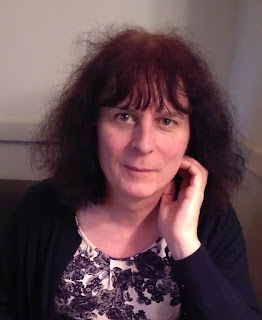 Catherine Butler is Senior Lecturer in English Literature at Cardiff University, where her academic books on children’s literature include Four British Fantasists (Scarecrow/ ChLA, 2006), and Reading History in Children’s Books (with Hallie O’Donovan; Palgrave, 2012). She has also produced numerous novels for children and teenagers, as well as some shorter works, of which the latest is Twisted Winter (A&C Black, 2013).

Michael Cadnum is a prolific author of both novels and poetry, and I’ve long been one of his admirers. As its title suggests, the contents of This Early Dark include both fiction and poems; however, since both are reduced to highly concentrated bouillon cubes, it is hard at times to say which is which. Very short poems and extremely short fictions, consisting of two or three lines apiece, are scattered through its pages. This is the slimmest of slim volumes, but it contains multitudes. Cadnum’s novels are poetic, and his poems, even when short, often contain a seed of narrative that could quite happily be coaxed to novel length. Just add water – or wonder.

Some of Cadnum’s work has a specificity that is reminiscent of William Carlos Williams, or indeed the haiku tradition that so inspired the Imagists. They take a familiar and “ordinary” experience, and pebble-polish it:

How lovely, the wrinkled tablecloth now that everyone’s gone.

This image pulls our gaze to it, but does not ask us to look beyond itself. Sometimes, though, the poet notices himself noticing: “I realize the book is reading me and I close it”. Or, a little less unsettlingly:

If we could stay like this--
dawn rain
my neighbor
trying forever to
start his car.

The promise of poetry is that we can stay like this, that moments can be pinned like moths, or framed like photographs. Except that poetry works in more dimensions than two, drawing on all the senses and their attendant moods.

Memory, absence and regret are prominent in many of the pieces here, and rain seeps through much of the collection, far more than one would expect from a writer who has lived much of his life in California: “Years after the cat is gone shadows everywhere wash themselves”; “I found your cigarettes in the suitcase and wake with your cough”; “I thought you touched me but it was the rain”. Often, the particularity of experience gestures towards metaphor:

After dark I wish I had not cut off so many branches.

Is this the small-hours fretting of an overenthusiastic gardener, or of someone who has been too profligate with life’s possibilities? (Both, of course.) Occasionally, there is a proverbial quality to Cadnum’s lines, as well as an observational one:

Only when it’s gone does the passing jet whisper.

Cadnum is a novelist, and often the ghost of a story, or the embryo of one, peeps from his words, teasing us to wonder what happened just after, or just before:

Soapsuds across the carpet where you left the bath to watch him leave.

The pieces were written over a forty-year period, but it is not clear whether they are arranged in anything resembling chronological order: the quality of Cadnum’s perceptions appears consistent throughout. Intimate relationships with people, with nature, with things, thoughts and feelings wheel through its pages, winking in and out like stars. I am not certain of Cadnum’s working method, although perhaps it is expressed in one of the shorter pieces here: “I burn the words to make them happen”. In any case, This Early Dark is a valuable and inspirational collection.

This Early Dark is published by CreateSpace and as a Kindle edition.