PICK OF THE YEAR by Celia Rees

Today is the Solstice. The shortest day. 'The year's midnight'. A time to look back over the year departing: where we've been, what we've seen, what we've done. Today, my fellow Writer Reviewers Linda Newbery, Adèle Geras and I will be sharing what we have been reading in 2016. In the spirit of the blog, the books we've chosen certainly weren't all published this year. These are our personal choices. Feel free to comment, quarrel or proffer your own. We'd love to know what you would have picked.
I've been reading a lot of non fiction this year. One of the books that impressed me most was Philippe Sands' East West Street: On the Origins of Genocide and Crimes against Humanity.

Sands is a Human Rights lawyer. His maternal grandfather was Jewish, from the city of Lviv, now in Western Ukraine. By tracing his grandfather's escape from that city,  which would see the annihilation the rest of his family, Sands offers a highly unusual and deeply personal view of the Holocaust. He also follows the lives of Nuremberg prosecutors, Hersch Lauterpacht and Rafael Lemkin, who were also Jewish and lost their families in Nazi held Lviv. It was through their efforts that the terms 'crimes against humanity' and 'genocide' were included in the Nuremburg judgement. Across the court from them sat the defendant, Hans Frank, Hitler's personal lawyer and Governor-General of Nazi-occupied Poland and who set up his headquarters in the city that connects them all. I found this clever book utterly absorbing and profoundly moving. It begins in Nuremberg and ends in a quiet woodland glade where the remains of three thousand five hundred Jewish men, women and children still lie, some of them relatives of Sands, Lauterpacht and Lemkin, all of them victims of Frank who would hang for his crimes. 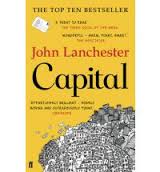 I read John Lanchester's Capital after watching the serialisation of the book on TV. Lancaster focuses his attention on the people who live in one street in a South London suburb, the value of their houses rising by thousands every week. The street  reflects the mix of multicultural London: pensioners, bankers, Pakistani shopkeepers, Polish builders, Eastern European au pairs, African asylum seekers. An immensely clever satire on property values and a sharp examination of the way we live now. One book leads to another and I went on to read John Lanchester's Fragrant Harbour, set in Hong Kong. This ambitious and cleverly constructed novel follows the lives of several different characters and spans a period from the 1930s to the present day and all the changes that the former British colony has seen along the way.

I re-read War and Peace while in bed with a bout of flu, my interest re-awakened by Andrew Davies' wonderful BBC adaptation. It took me a week to read but it was a week well spent. Some critics think War and Peace the greatest novel ever written. I'm inclined to agree. Another novel on an epic scale is Annie Proulx's Barkskins. I'm a great admirer of Annie Proulx. She's one of my writing heroes. She has the rare ability to be able to write about the intimate and small, in her wonderful short stories and shorter novels, and then to write something with enormous, sweeping ambition. In Barkskins, she follows two colonial dynasties across continents and centuries, never losing sight of her characters, never losing track of their stories. Through this, she reveals the appalling ecological destruction of North America's magnificent and irreplaceable primordial forests and the parallel degradation of the continent's Native Peoples.

No Woman's World sums up what the female journalists and photographers who reported on the Second World War were told time and again.

Iris Carpenter was one of this courageous band of women who did it anyway. She covered the latter stages of the war in Europe, arriving four days after the D-Day landings, travelling across France with the advancing American Forces and ending up in Berlin. William Boyd's Amory Clay could have been one of this intrepid bunch. Sweet Caress: The Many Lives of Amory Clay follows the life of the eponymous fictional photographer through the 20th Century in a panoramic sweep reminiscent of Boyd's 'Any Human Heart'. Amory begins her career as a society photographer in the '20s but she is soon exploring Weimar Berlin, Jazz Age America and Blackshirts on the streets of London. She goes on to record the Second World War and Vietnam. Amory is British but it is possible to see fascinating traces of Lee Miller and Martha Gellhorn, Iris Carpenter, Margaret Bourke-White and others in her fictional life. The text is punctuated by actual photographs - a nice touch!

I've always been a fan of the Gothic and two novels this year, The Loney by Andrew Michael Hurley and The Essex Serpent by Sarah Perry, have fed my appetite. Both were published to high and deserved acclaim. The Gothic is a difficult genre to do well but both these novels, seemingly very different, one modern, one historical, one set in the north, the other in the south, capture the sense of strangeness and 'the other' lurking just below ordinary life. They both inhabit a similar landscape: drab estuarine borderlands of salt marsh and mud flats with treacherous weather, dangerous tides and unpredictable currents moving under the surface and use it to great effect. They also have that haunting quality common to all good Gothic. They stay in the mind long after the last word is read.

Finally, I've been reading a lot of spy fiction over the last couple of years for reasons that I trust will one day be clear. I end with The Human Factor by Graham Greene, the spy novel of spy novels by the master the genre. Another tricky one to do well. Many try but few succeed. Forget James Bond, even George Smiley. This is what being a spy is really like.