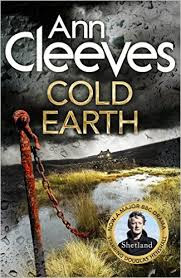 Jocelyn Ferguson was born in Scotland and grew up there and New York. She is author of Rope Tricks (Virago) and Anne Hathaway, an award winning play performed at Birmingham Centre for the Arts. She has won both an Arts Council Award and a Hawthornden Castle Residency. She has taught Creative Writing at Keele University and, most recently, at the Seamus Heaney Centre in Queens University, Belfast. She now lives in the south of France.

Crime Fiction fans of Ann Cleeves have come to expect a compelling narrative, a powerful sense of place and atmosphere, acute characterisation and pared back prose, and with Cold Earth, her seventh novel in the Shetland series, she does not disappoint.

It has been raining so hard and for so long on Shetland that while DI Jimmy Perez attends a funeral, the hillside behind the graveyard begins to slip relentlessly down towards the sea. Tombstones tumble, the road vanishes, and the stout stone walls of a cottage collapse and disappear. In the aftermath, the body of a woman is discovered with the detritus from that cottage. Considering the weather and the terrain, she is curiously dressed in red silk. And, more curious still, no one on the island appears to know who she is. A post-mortem reveals that her death was not, as assumed, a tragic consequence of the landslide. It was “violent and quite unnatural”: she’d been strangled. At which point Jimmy Perez digs his teeth in; he becomes a man possessed.

But unlike single-minded Vera Stanhope, Cleeves’s best known detective, Jimmy has other pressing issues to deal with, most of them of his own hyper-sensitive making, He frets about his step-daughter and about the (possible) blossoming romance with detective Willow Reeves. Is it too soon after the death of his ex, Fran, he wonders? Is Willow really interested, he wonders? He’s not very good at reading the signs, and Willow, in turn, can’t tell his come-ons from his confusion.

These ‘other issues’ form the backdrop to the gradual unravelling of the central mystery. And it’s in this that Ann Cleeves’s strength as a writer lies. Her characters are so warmly and solidly depicted, they steam in the dank atmosphere of a Shetland winter. Jimmy’s personal fears and uncertainties keep his feet firmly on the ground, while his astute perceptiveness (Willow notwithstanding) and dogged tenacity make him a fearsome detective. We like him a lot. He’s a very good egg: he’s nice to children and quietly considerate of others, especially women, even while he notes the smallest discrepancy in each conversation. DC Sandy Wilson, Jimmy’s insecure bagman and the island's other main police presence, regards him with some awe.

Discovering the dead woman’s identity is essential to uncovering her killer, and the former has to be done before Jimmy can really get to grips with the latter. There are implications in this for tension and pace. Cleeves deals with the pitfalls by focusing our attention on a handful of islanders with edgy secrets, who may or may not have links to the woman. And thus we get much too of local Shetland culture. At the same time, the geography of the island solidifies. At every turn we view with Jimmy the bleakly beautiful landscape he has chosen for his home. It’s a fitting context for disturbing undercurrents.

Cleeves is on record as saying that she may well kill her hero off in the next, final book in the series. She fears the absurdity of so many murders within the confines of a relatively small (and relatively peaceful) island – a kind of ‘Midsomer’s Murder’ effect. We can only commend the fact that her work is rooted in the plausible but I, for one, would emphatically regret Jimmy Perez’s passing.