THE LIE OF THE LAND by Amanda Craig, reviewed by Adèle Geras 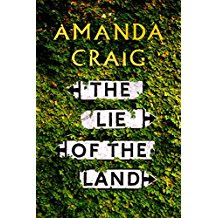 "The sort of book you want to go back to, once you've raced through it, so that you can linger over details."

After I finished reading this book, words to describe it were tumbling about in my mind.  Here are some of them: abundant, generous, overflowing, detailed, knowledgeable, thrilling, melodramatic, involving, gripping, modern, topical, controversial, political...

But in the end I decided on one word which sums up exactly what this book is. It's VICTORIAN. In the best possible sense, which is to say it's both a page- turner and a primer; a novel full of stuff happening, people getting into every variety of turmoil, and events in the Body Politic informing everything. It takes time over detail, and tells you about things which other books leave out. It's concerned with incomes and the results of the Referendum vote on Brexit but also with feelings between people and describes both with great sensitivity and enormous brio. You come away from it not only knowing about such things as conditions in a Devon pie factory for its workers both foreign  and British, but also having in your mind's eye a beautiful landscape, as well as intimate knowledge of several houses. The book is a cornucopia...that's another word that occurred to me several times while I was reading it.

It starts, perfectly, with a summing- up of the whole subject of the novel in one sentence. Again, this nods to the Victorians and also of course, to Jane Austen: "There is no money and the Bredins can't afford to divorce."

From this situation, which you know straight away, many paths and narrative strands flow towards a very satisfying ending. That's also Victorian. They were not given to ambiguity, or post-modern 'choose your own outcome' stuff.  So you know that, to all intents and purposes, the good will end happily and the bad unhappily. That, as Oscar Wilde said, is what fiction means.

But along the way your heart will be in your mouth for several of the characters. There's an unsolved murder. There are issues of every sort, from housing problems to farming subsidies, to the care of the elderly and the dreadful pain of infertility. There's neglect and love and horror and comparisons of life in London with Dorset life. There's friction between fathers and sons, and stepsons too. There's a glamorous grandmother. A rock star. A slightly spooky teenager who's also a gifted pianist. A Health Visitor, who's the wife of a sheep farmer...and so on.

At the centre are Quentin and Lottie. He's a journalist, a bit down on his luck now and she's an architect who, like her unfaithful husband, isn't a bit keen on the idea of leaving her work and decamping to the country. Their two girls are young enough to attend the village school, and Lottie's son by another man, Xan, about to apply to university. He's the one who works in Humble's Pie factory. (That pun, too, is worthy of Dickens himself!) Close by are living Quentin's parents. Hugh is a dying poet with a couple of poems that are studied on the syllabus but not much else to show for his writing life...he reckons he's past it. Naomi is a saint, caring for Hugh.

I could go on. The book teems with characters (Victorian, again.) Some are up to no good. There's been a murder at the cottage where Quentin and Lottie settle...the murderer is still at large. The head was missing from the body when it was found.....need I say more? If you want melodrama, look no further!

I didn't say that it's brilliantly written, but it is. It's the sort of book which you want to go back to, once you've raced through it, so that you can linger over details. It would make the perfect holiday read.

I must add my usual disclaimer: I know the author, but I would not have rushed to review this novel if I didn't genuinely love it. You'll have to trust me on that.

I'm pretty sure that anyone who picks up this book will find it hard to put down, even though (Victorian!) it's quite heavy. A Kindle edition would solve this problem but do buy it in whatever format suits you best. You will not regret it.

The Lie of the Land is published in hardback by Little, Brown.