Lockdown Sunday extra: C J Driver on A BOOK OF FRIENDS In Honour of J.M.Coetzee on his 80th Birthday 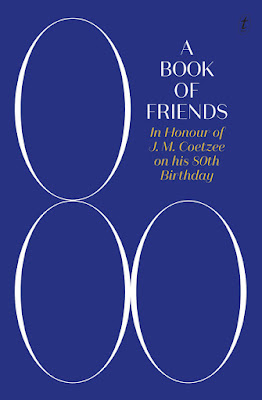 "An absorbing corollary to the work of a great writer."


C.J. (“Jonty”) Driver was for many years a teacher – in Africa, Hong Kong and England - and latterly a headmaster, now living in East Sussex, he travels regularly to his country of birth, South Africa. Elected President of the anti-apartheid National Union of South African Students, he was held in solitary confinement by the South African police in 1964 on suspicion of involvement in the African Resistance Movement. While a postgraduate at Trinity College, Oxford, he was refused renewal of his passport and was stateless until he became a British citizen. He remained in effect a prohibited immigrant in South Africa until 1992. He has been honorary senior lecturer in the School of Literature and Creative Writing at the University of East Anglia since 2007, a judge of the Caine Prize for African Writing and more recently has had residencies at the Liguria Study Centre in Bogliasco, at the MacDowell Colony in New Hampshire, and at the Hawthornden Writers’ Retreat. He has published five novels (the first four of which have recently been re-issued by Faber Finds), two biographies, two memoirs, and seven books of poetry, the most recent Before, published in 2019 by Crane River in association with the African Sun Press. The Uhlanga Press will publish, later this year or early in 2021, Still Further, New Poems 2000-2019.

I need to be utterly upfront about what follows, because it clearly teeters on the edge of nepotism. I want to recommend a book mainly commissioned and entirely edited by my sister, Professor Dorothy Driver, as a way of honouring on his 80th birthday someone she calls her "life-companion", whom it happens I've known since 1958 (actually longer than she and he have been together): J.M.Coetzee, novelist, autobiographer, academic, twice Booker Prize winner, Nobel Prize winner, and so on.

A Book of Friends was published earlier this year. There is a preface by my sister, a foreword by Professor Jonathan Lear; and a range of contributions by some 35 other writers, including a poem by me. The range is wide: for obvious reasons, I'm not a person who could review the book objectively, but there are bits and pieces there which I think deserve reading and re-reading – or looking at more than once. For instance, reproduced as "Images". there are (among others) reproductions of two paintings by David Coetzee, John's brother; some photos by Kai Easton of John's cycling trips in France; Adam Chang's portrait of John; and a double-page "picture-plus" by William Kentridge.

Some of the entries were written specially for this festschrift; other are extracts from works in progress. It's not a great surprise that not every piece is as riveting as every other. I found myself especially interested in Nicholas Jose's story, Evvy After, which includes James Joyce's story Eveline, Dubliners 1914, as an intertext. I loved Peter Goldsworthy's very funny piece which begins when he is asked at a literary conference if he has ever met the "great Australian writer, Elizabeth Costello". There are interesting poems by Marlene van Niekerk, Antjie Krog, Akwe Amosu and others. I enjoyed what I think is an extract from a memoir by Siri Hustvedt.

Unsurprisingly, this is an international collection. Partly as a result, some of the writers included were entirely new to me, and I was glad to have a fairly extensive description of the contributors to help me place them. Although John is South African by birth, upbringing, education and most of his years, he has now emigrated to Australia; he has taught in the Americas, north and south, and his polymathic brilliance means that he is regularly invited to literary festivals and conferences in countries beyond the English-speaking world. I don’t know how widely available the book is going to be even within the continents of its publication, Australia and South Africa, but I would nevertheless recommend it heartily. For those who can’t get a physical copy of the book, there is an ebook available.

I have never not enjoyed reading what John Coetzee now calls simply “writings”, because he wants to blur the boundaries of genre. I would recommend as specially memorable and likely to become classics what I would still call novels: Waiting for the Barbarians, Life & Times of Michael K, and Disgrace. I won't be around to have my judgement vindicated, but those are the three “writings” I would start with if I had never come across his work before. When you have read them, perhaps even before you get to them, I think you would find A Book of Friends an absorbing corollary to the work of a great writer.

A Book of Friends, In Honour of J.M.Coetzee on his 80th Birthday, is published in Australia (by Text Publishing) and in South Africa (by Amazwi Museum of South African Literature)